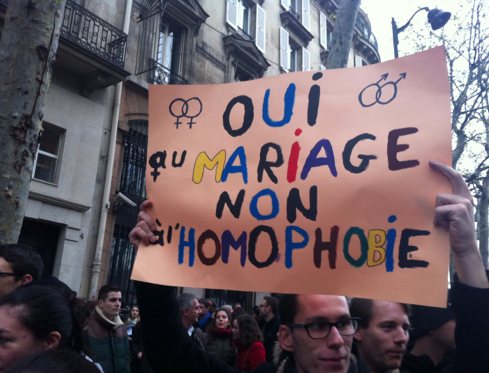 Yes to marriage, non to homophobia

Howdy all! I’m away on holidays, so I have invited my favorite guest blogger, my very own M, a teen who has something to say to the world, to share with you…

Several weeks ago, upon exiting our house I got caught in the middle of a demonstration opposing gay marriage. Being forced to walk side by side with people fighting against gay rights made me sick. To make up for that terrible experience, today Sunday, December 16th, I joined some of my best friends and what felt like a million other French people to do what they do best: manifest! 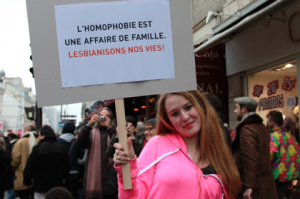 This was for something I strongly believe in; the right for same sex couples to marry and adopt. Because if you love someone, you should be allowed to marry them. Nothing else matters. Although it was scheduled to start at 2pm, my friends and I showed up at the meeting place, the Bastille, at 3pm and there was still an insane amount of people. The plan was to march through Paris, cross the Seine and make it all the way to the Luxembourg gardens.

When I was at the rue de Rivoli, not even halfway through, I learned that the people at the head of the protest had already arrived; we were about 60,000 strong! Everyone there had the most creative, personalized signs and the funnest part of the afternoon was reading them all. At one point I spotted an extra sign and asked if I could hold it up. They were happy to say yes; everyone was sharing. What warmed my heart the most was seeing young kids and toddlers, walking with their parents, proudly waving flags. 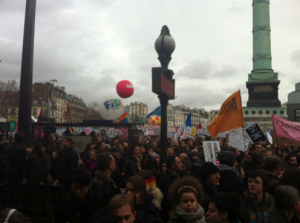 The crowd at teh Bastille

Reading the abundance of hand-made posters really showed you what kind of people were there, uniting forces. There were the obvious “Yes Yes Yes to gay marriage” but some got more original. For example one said “I’d rather have a pair of moms than a père de merde (crappy father). My favorite were a couple of older looking women proudly brandishing a sign saying that they were here to fight for their daughter’s rights. The way thousands of strangers could mix together, laughing and shouting, marching for what they believe in was a fabulous way to spend a Sunday afternoon. I am genuinely happy to have been able to participate. For the first time in a couple weeks there was sunshine all afternoon and it was a truly bright day. 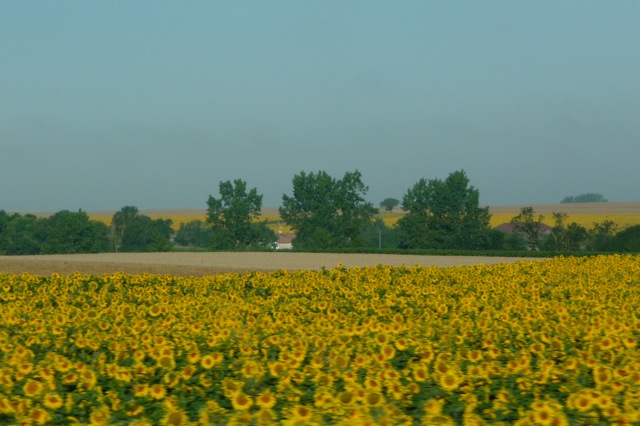 Hossegor is about 7 hours from Paris. We do this ride every summer, swarming in a southerly direction at almost the exact same moment as 1/3 of the Netherlands, Belgium and Northern France. Every family has their secrets for beating the traffic. Some leave a day early, some fly, others take the train. Mr French likes to leave at an un-godly hour, so we get up at 4am and head through the city to the Périph, direction Orléans. Then we start to debate if it is better to take the A6a or A6b. I always opt for the a and it is always the better option, but we have the discussion anyway. This is particularly lively when we are driving separate cars and our kids have to answer our cellphones, acting as go betweens. Its a real highlight for them, and I’m thrilled that we’re creating memories that will last a lifetime. 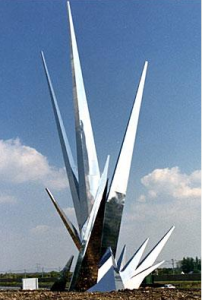 Then we reach the A10 and it is a straight shot to Bordeaux. I know that we’re really on our way when we see the Fleches des Cathédrals

This is meant to be a vacation, so we try to keep it pleasant, by stopping somewhere for the night along the way. One year we stayed at Dax where there are thermal springs serving the 90+ crowd, creating even more memories that our kids will cherish almost as much as fielding our phone calls.

Last year we headed out on the 14th of July and Bastille Day in Bordeaux, watching the fireworks from the rooftop of our very charming hotel, for memories that will help our kids forgive us for the phones calls and evenings in sleepy towns for the infirm. 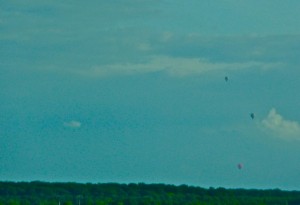 Along the road we spot hot air balloons above what were once royal hunting grounds in the Loire. Then sunflower fields start speeding past. Finally, we reach the Condom vineyards of Armagnac (the really is the name of the town… Condom. A great source of childish delight for some). Before we know it (or not soon enough, depending on the mood in the car and the traffic along the way) we are crossing the Gironde river and on the Bordeaux ring road.

Just south of Bordeaux we spot the maritime pines trees of the Landes region, and we have arrived, let the memories roll!!!