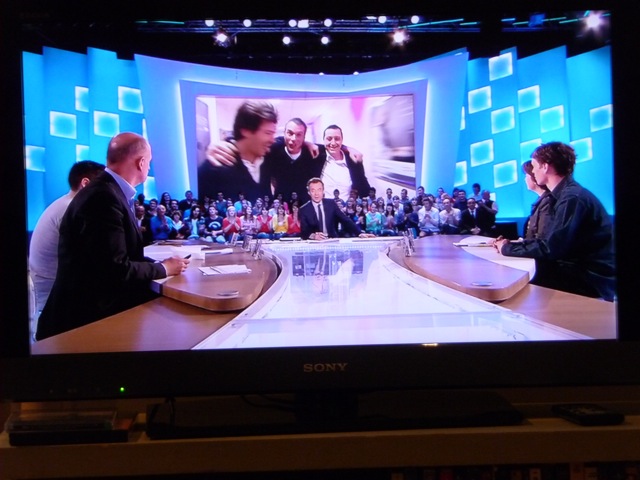 I answer my ringing cellphone…
“Oui, âllo?”
“Bonjour, Madame S?”
“Oui?”
“This is M xx, your accountant.”
“Oh, yes,” I reply, looking for a bush to hide under or a passing bus that could hit me and relieve me of my terror of all things tax.
“I’ve been reviewing your receipts and, well, do you really think a television is a legitimate business expense?”
“Oh, well, THAT. Its just that I’ve never had a TV and now that I’m writing international ad campaigns for the mass market, I need one for work. Its just for the ads, I promise.”

I gave up on television a very long time ago. We had screens for watching movies, and  there were moments when I relied on the babysitter-in-a-box via DVDs, like any modern parent, but for the most part, it was not my thing. 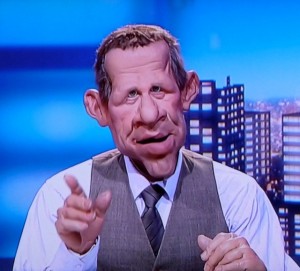 Three years ago I started writing ads for companies that buy ad space on TV and the “idiot box” moved in. So did Mr French, and we started watching rugby games. Then he added some business news and before I knew it, I was watching la télévision.

I’ve started turning on and tuning in all by myself now, becoming a fan of Le Grand Journal, which is news in an entertaining format. Think the French version of Good Morning America, but at night and with puppets and a weather girl who is an affront to modern feminism. I like this show because it gives me a really good idea of what is going on from a fairly irreverent, uniquely French perspective.  It makes me laugh. 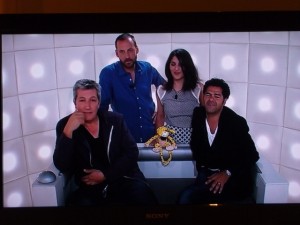 The cast of Marsupilami

Serious guests like Martine Aubry, president of the French socialist party, are questioned by a round table of journalists, which sometimes includes the American singer, China Moses. China is so fluent in French that Gad Elmaleh, a French comedian didn’t even suspect that she was from the land of burgers and shakes. There are Les Guignols (marionettes) that conduct in-depth interviews with other puppets representing politicians and business men and the Boite à questions, a brightly lit white box in which stars are asked thought-provoking questions. Last night, they asked the cast of the new film Marsipalami,“What sentence is most likely to kill the mood in the bedroom?” French star Alain Chabat replied with disconcertingly suspicious speed, “Oh that? Its just a bit of herpes.” 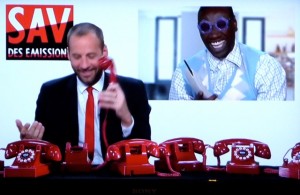 SAV by Fred and Omar Sy is a nightly improv routine about customer service reps and the calls they receive.The actors have so much fun that it is often a challenge for them to keep a straight face. Look out for Sy, who is bound to hit the big screen in America with the ironically touching film “Les Intouchables”, a true story based on the relationship between a obscenely wealthy paraplegic and his male nurse from the projects.

The most recent hit from Le Grand Journal is the short film series, Bref… 2 minutes tales of a single man in Paris. Francophones can watch it here. And if it doesn’t work from a US ip, well I guess you’ll just have to come to Paris! 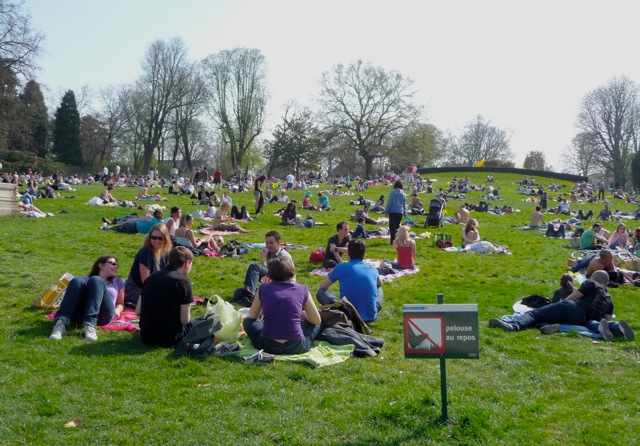 I am with my dear friend Julie visiting the ruins of Angkor Wat to celebrate New Years Day, 199x. Today we’re visiting some of the further flung monuments with virtual no visitors, when suddenly an entire bus load of French tourists arrives. There are signs everywhere reminding people not touch the sculptures, the loose stone erodes easily. The French tour guide leads her troop to an out cropping of columns and statues and tells them all to be seated as she begins to lecture.

As a good anglo-saxon tourist, I become irate and march other there to inform the guide that she is jeopardizing the ancient site and her minions are destroying precious art, hoping to at least shame the others into getting off the rocks. No one budges. 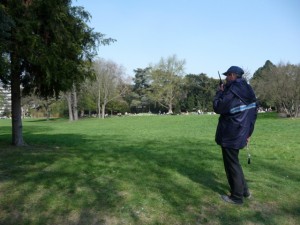 Although I was already fluent in French, I had not yet lived in Paris and had not yet been exposed to this insult. Not only do the French believe that the rules were created for the rest of the world, but they think that those who enforce the rules are beneath them. I was completely ineffectual in my 5 minute crusade to save Angkor Wat, having no better reply than, “yeah, that’s right, you fat cow.”

I have since been referred to as a cop by a 7 year old who was ramming his remote controlled car into a harmless infant, a spoiled brat teen who doused me with coke at the Luxembourg gardens and a Dad who I caught out trying to use his 10 year old to cut in front of me in line at the ski lifts. By then, I had a retort.

“No, but my husband is. Just a moment, I’ll introduce you.”

Mr French is neither a police officer, nor my husband, but my insulter never waited in line long enough to find that out. 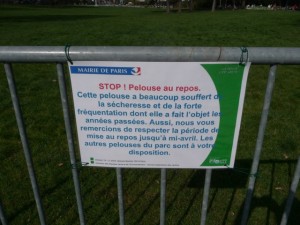 Fences required when they mean it

Last Sunday, April in Paris arrived two weeks early, so Mr French and I packed up the teens for a picnic at a the glorious parc Montsouris. There were signs everywhere reminding law abiding citizens that the lawn was “resting” for another month. Nobody cared. So this time I did like the French, settling in, satisfied in the knowledge that rules are for everyone except moi.