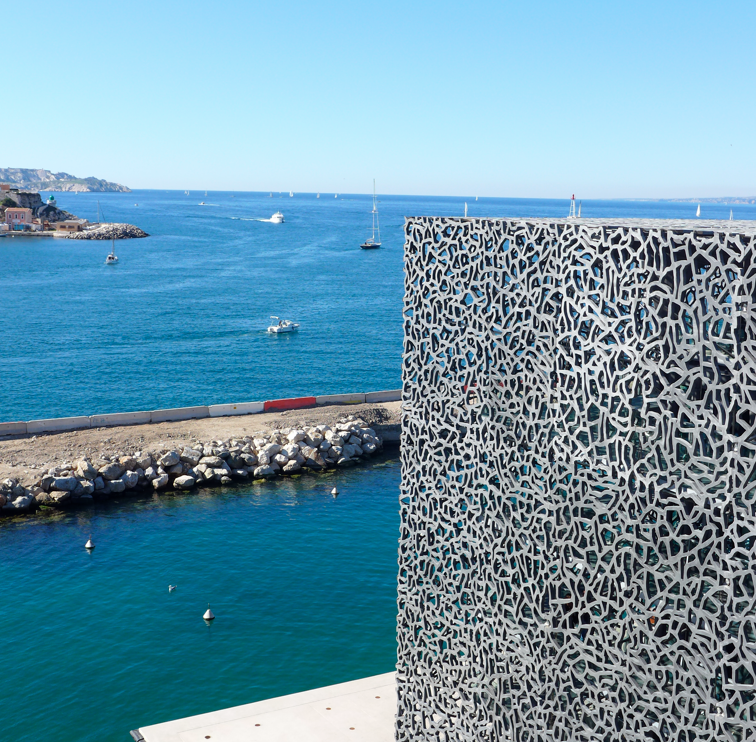 The next morning was all about the Mucem. Louis XIV built Fort St Jean at the entrance of the port, with a second fort guarding the other side. Visitors imagine that the forts were built to protect the city from sea-based invaders, but the cannons were aimed on the town, the king as distrustful of southerns as a modern Parisian. Today the fort has been renovated into a glorious cultural space with a marionette museum, a miniature circus display and lots of herbal scented outdoor space for play, picnics and lounging around. 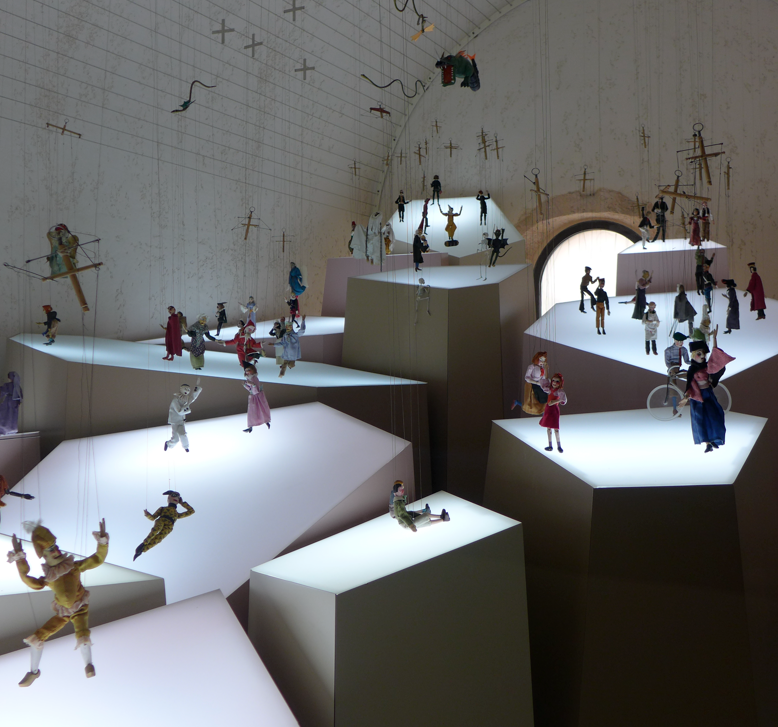 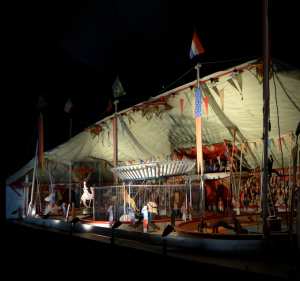 A vertiginous pedestrian bridge connects the fort to J4, Mucem’s modern wing with a permanent exhibition on the Mediterranean region. The collection is, quite frankly, pathetic. There is no nice way of putting it. Cheap replicas are displayed in glass cases like valuable artifacts. The story, well, there is no story, logic or coherency. Which was great because it meant we could rush back upstairs and slurp down a few oysters on the rooftop terrasse before heading home to Paris. Oddly enough, neither Mr French nor I are major friends of the bivalve, but that was beside the point of the glorious, sun soaked rooftop area.

We were starving because before coming to the museum, which only opens at 11am, we had gone for a run, then tried to have lunch Chez Roger on the Old Port. Chez Roger specializes in seafood and all I can say is, “Do NOT eat Chez Roger. No matter how enticing the terasse may be, in full sun, with the port waters just a few metres away, do NOT eat there. It was, bar none, the worse seafood platter I have ever had in my life. The crab tasted like rotten eggs. Even the Pasits couldn’t was the horrid taste out of my mouth. Combined with horrid service and even worse clientele, this is a place to AVOID at all costs. 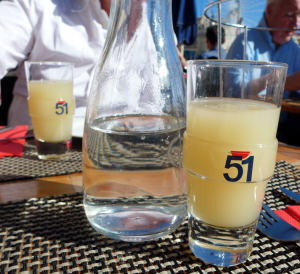 The settling in for the flight home was a lesson in cultural studies. The plane was packed and except for me with my olive oil, everyone had opted for carry-on. Mr French sat in his seat, the paper bag with the porcelain doll on the seat next to him. “Monsieur,” the flight attendant gestured, “the flight is full, you’ll have to store your bag in the overhead bin.” Mr French ignored her. She persisted. He finally acknowledged her existence, “Non. This package is very, very fragile, its not moving.” She explained, he refused. I sat between them, my head going back and forth like I was watching a  ping pong match.. In the end, she agree to put it in the front of the plane, in a closet reserved for crew.

I had put my tote bag in the overhead bin and after that, every time a passenger tried to shove it my bag aside to squeeze in their suitcase, the same flight attendant would jump over, to reprimand them for crushing my things, and would force them to the back of the plane with their bag. In the US, the flight attendant would have written us off as jerks, but here, Mr French had earned some major respect. We were flying home with considerable street cred’ and I was more confident than ever that life is full of surprises living with a Frenchman. 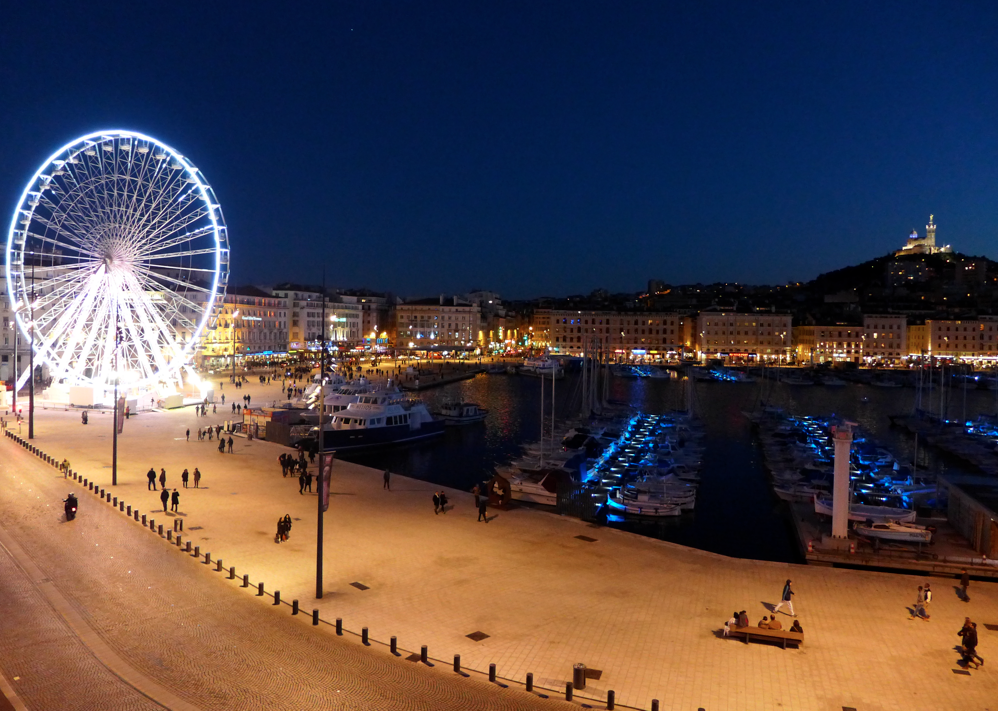 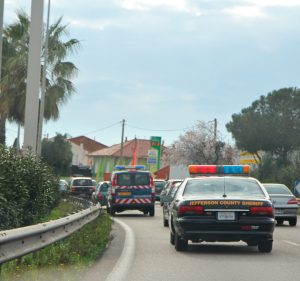 Marseille has a horrible reputation. There is a popular joke in Paris, “Hey, did you hear what happened in Marseille this weekend??? A man went to a café for the morning, enjoyed his coffee and walked home safely.” It kinda makes you think twice before heading there. Especially as you follow a Jefferson County Sheriff car with California plates in to town…

But if you don’t read the news, you’d never know there was a crime problem in town. Our first night in town we pulled ourselves away from the stupendous view in our room at La Residence du Vieux Port and strolled that very same port out to the Fort St Jean. The pathway narrowed, 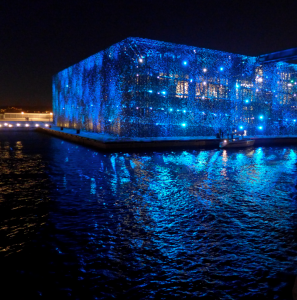 grew darker, rounded a bend, and yet we felt totally safe in the warm balmy air, walking pass lovers and fishermen and joggers as we rounded walked around the corner and were dazzled by the astonishing set of the Mucem museum. A lace work of concrete, built to look like the ripples of water was lit a sapphire blue, reflecting in the sea below. We couldn’t wait for our visit the next day. 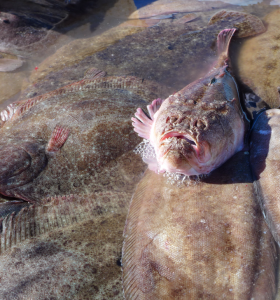 This guy made me run even faster…

For an urban destination, a visit to Marseille can be physical. There is a great run along the Old Port; a flower market and a fish market line the way and you pass under the surprising Norman Foster designed Pavillion before getting to the Palais du Pharo gardens and up the corniche which follows the sea, the Count of Monte Christo’s Chateau d’If in view. It was lovely, and I was thrilled that on the return trip we ran through the odor of sardines before hitting the mimosa scented air. Then there is the hike up the Observatoire hill to the Notre Dame de Garde Basilica. I loved the mobiles with giant model boats that hung from the ornate, gothic ceiling. And I had a blast watching out of shape visitors as they trudged up the stairs as we headed down. 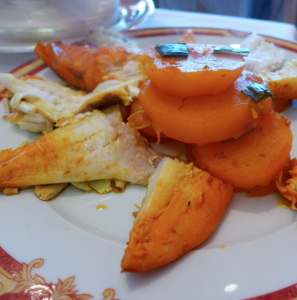 As we walked through Le Panier and La Plaine, two dynamically creative neighborhoods full of young people trying to make a mark on the retail world with original merchandise in charming boutiques, we kept an marveling at what a great lifestyle was to be had at this very affordable city by the sea. But we also marveled at the number of abandonned shops and disenchanted store owners. And although we strolled the boutiques, Mr French had banned me from shopping still recovering from the shock of my purchases earlier in the week. 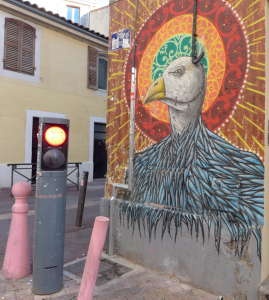 “Honey? You bought honey? As if you can’t find honey in Paris. And olive oil? Really? Now that’s the perfect thing to be packing in a suitcase for under a plane.” He was not impressed when I explained the apiculture had been a sweet old lady and the olive oil was rumoured to be some of the best in the region. So I satisfied myself with shooting everything in sight. Walls of colorful graffiti my target of choice and I was thrilled with the day.

As the sun was setting, we stopped in an antique store, and there, I spotted her. An 18th century doll that aristocrats used as models for the dresses they wanted to order, a delicate porcelain bouquet in her hands, nothing but wire frame and fragile (200 yr old) cloth below the bodice. I caught my breath at the beauty of it. Mr French asked the price. 60€. Even a fake would be worth 60€ but I didn’t dare ask. She was fragile and I had that pot of honey to schlep. “We’ll take it.” Mr French declared and I looked on in dismay as the antique dealer shoved her bubble wrapped form into a generic brown paper bag.

That night we were still full from our decadent lunch. We agreed on cocktails at the Intercontinental up the hill from the port. In an imposingly elegant 18th century public hospital, the hotel looks a palace. The bar is plush and modern, with great cocktails and even better live gypsy jazz music. We could have stayed all night. But we eventually rambled back to our room in the wee hours, the lapping waters of the sea below playing a lullaby as we fell asleep. 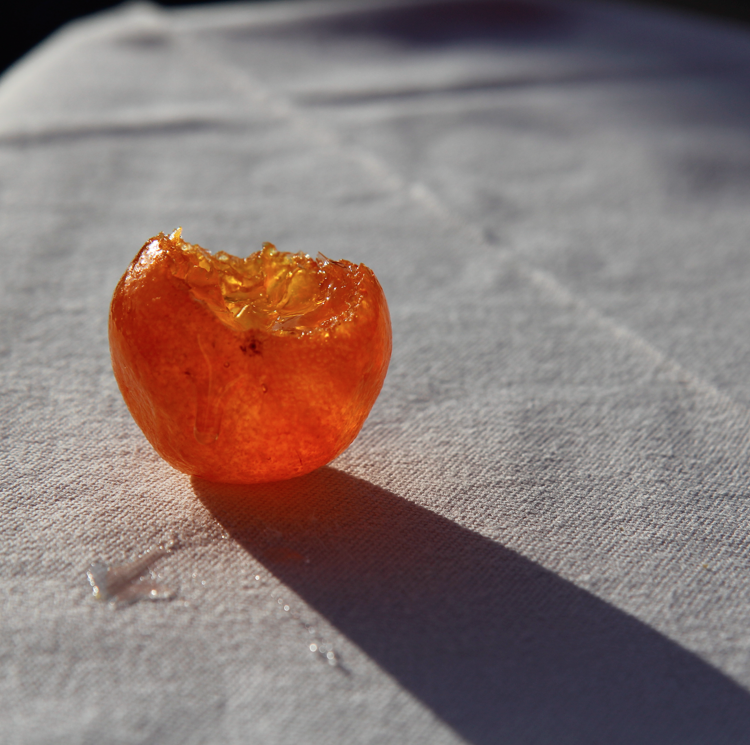 St Tropez is a charming little town, that is still home to a local fishing fleet, with fishermen selling the catch of the day from a tiny, very picturesque fish market, then crossing the street to have their morning shot (of booze, not espresso) at 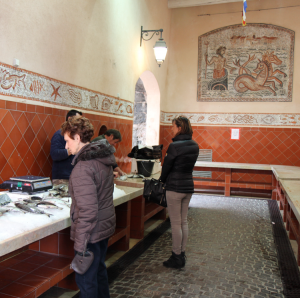 Le Gorille, the once favorite haunt of Picasso. Sitting there, eavesdropping on their chatter about which fish were biting, you can see why Brigitte Bardot and her gang fell under its charms while filming And God Created Women….

I headed off, yet again, to explore the Ramatuelle, where the classic French film was made and then into the hills, to the famous perfume town of Grasse. A perched village of ochre and amber buildings, wasting away under an alluring patina, I was seduced by the town before setting foot into a perfumerie. Fragonard is perhaps the best known, with shops all over Paris, but Galimard is where is all began in the 18th century. Until then, Grasse had been home to the very smelly leather tanning industry and the got to place for aristocrats requiring fine kid gloves.

While soft, and gorgeous, the gloves stank. Galimard tested the idea of adding a bit of lower essence to get rid of the stench and sent them off to Catherine de Medici, starting a royal trend that gave birth to an industry.

I spent my day exploring and only returned to the port late in the day, discovering the very chic, trendy café Senequier. The Senequier is outrageously expensive, attracting the designer clad, yachting crowd. Exactly the kind of place I usually avoid, but I decided to go for it, because the tables had full sunlight, there was a great view and it was one of the few places open in the off-season. It was also 16h and I hadn’t eaten a thing all day, too excited exploring the region to stop, so this would be my one meal of the day and I felt like I could afford to 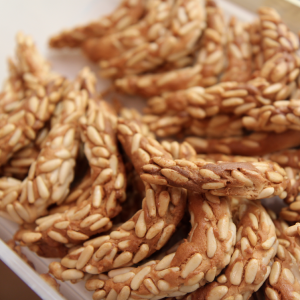 splurge. Given my decadent feast at La Table du Royal, I still wasn’t hungry. I settled on a “simple” crab salad (45€) that came with fleur de sel flakes and artisanal olive oil. One of the best salads I have ever had. I don’t know if it was from having fasted all day, or the winter sun warming my face, but this salad was worth every exorbitant centime. And the crisp white wine was the perfect counterpoint of citrus flavour meeting savoury sea. Not hungry, but needing sweets, I asked for a preserved fruit from their pastry shop. The very friendly waiter explained that the fruits were not on the café menu, but he’d be happy to reserve my front row, sunset seat while I went in to get a few fruits to enjoy with my coffee. Not only does Senequier have a great location, with excellent food, but the staff is genuinely nice! 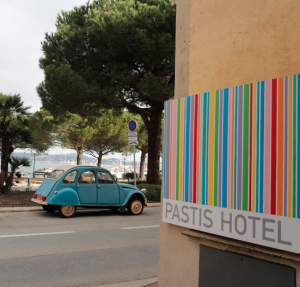 After linner, I stopped at the boulangerie des Deux Frères to stock up on their incredibly deliciously, uniquely southern pine nut cookies before heading back to my room at the very cosy Hotel Pastis. The perfectly designed rooms are remarkably spacious, the perfect place for a post-beach nap before a night on the town, the peaceful, warm decor blending perfectly with the lovely provençal garden and aqua pool. I would have had a very hard time leaving, if it hadn’t been to meet Mr French in Marseille.