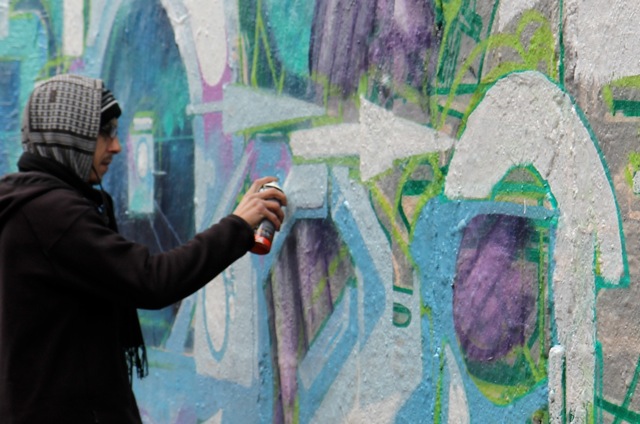 The kids were on school break last week and Mr French was away on business. With E preoccupied preparing for her Bac exams and The Bug visiting family in sunny California I had a rare bit of leisure time on my hands. The skies were a leaden grey, mingling with relentless rain and my Parisiennes were almost all away visiting far-flung family or on exotic vacations to wonderfully alluring places like Mauritius, so I was having an unhealthy dose of holiday envy. It was time for a break. But a working girl has got to work, so I took the morning off, picked up some out of town guests and headed to the rue Denoyez in the 20th arrondissement for a little cultural disorientation and a wild collection of street art. 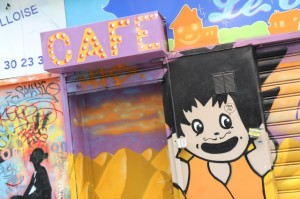 We were really lucky to catch a tagger in the act just as we arrived. Unfortunately, he is from Barcelona and does not speak French. I do not speak Spanish. We tried a bit of English but the most I got out of him was that he has two names; a real name and his tag name, both of which I have forgotten.

We visited his gallery, Mind, where I snapped a few shots of the paint cans that reminded my of photos I had taken at my tailor’s. The canvases in the gallery were small, which must take a considerable amount of skill, but inside on the walls, I found them to be a bit sad and without any of the power of good graffiti. 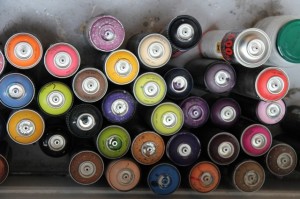 them continued up the street to admire the pique-assiette parking poles, pochoir street art and more graffiti. It was colorful and bright. The perfect ant-depressant to combat the dreary grey spring we’ve had this year. We had fun identifying Rimbaud, finding Batman and admiring a particularly twisted montage of decapitated Barbie dolls exposed to the elements in an emptied out hole of a tired old building.

The pièce de résistance came a 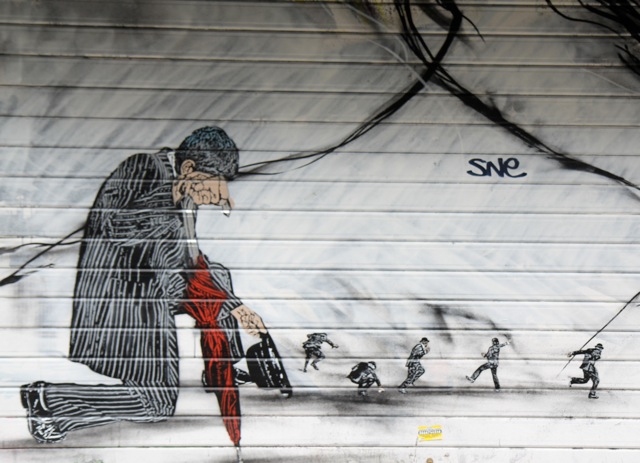 s we ended our walk and turned right on to the rue Ramponeau, heading towards the Belleville market. There was a truly impressive example of black and white graffiti art that we discovered just as a femme walked by in brightly clad African fashion. Confirming that you don’t need museums to enjoy great art. 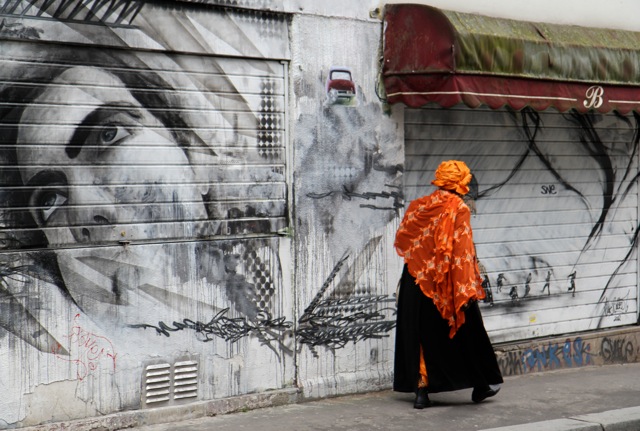