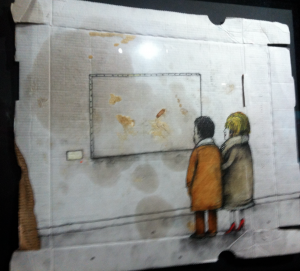 A grease stained pizza box in an art exhibition years ago.

Bobo, boho, and now, ipstairs… the trendy young French of each generation. They were bourgeois bohèmes the affluent dressed as hippies, looking to escape traditional French esthetics, without sacrificing their creature comforts. As time lapsed, they grew more and more nomadic, discovering New York and falling under the charms of SOHO, adopting an even chicer look that doesn’t pretend to turn a back on the fashion world, but embraces it.

Last Friday, Mr French played hookie and after a fruitful day running errands under sub-zero blue skies, we had stopped to reward ourselves with a Hotel’politain from Le Bar. Originally the Love Pavilion, Oscar Wilde lived and died here, Dali hung his hat and Liz flirted with her beloved Richard Burton in the rooms above. In the early 2000’s eclectic design Jacques Garcia gave the place a face lift with a funky blend of violet silks in velour green foliage. The bobo’s loved it, the boho’s were not far behind and now, the hipsters have arrived wearing his and her matching fur trimmed military coats, the obligatory plaid flannel shirts and Fonzi slicked hair.

Unexpectedly, some girlfriends from the neighborhood walked in for a little joy juice and I joined them to let Mr French review the emails he’d missed while giving me his undivided attention all day.

The hipsters were busy chatting away.

– A guy over 50, who wears colored pants, listens to LP albums and drives a sports car.

I glanced at Mr French in his tomato red pants, the bag of albums in the chair facing him and I shot him a grin.

–It’s your sports car, he hissed, referring to the company car that was parked at home.

I couldn’t help laughing at the joke we’ve become, living caricatures, of the microcosm we live in, like the painting on the back of a grease stained pizza box.