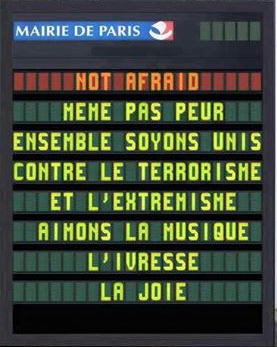 We are just being these days, each mourning in their own way and doing our best to move on as we explore the breadth and depth of our new normal.

Flags are at half mast and the entire country is in mourning until Wednesday. News outlets have added a black band to their logo, the symbol of peace with the Eiffel tower inside can be seen everywhere, and for a brief moment, politicians are behaving, showing a united front in the face of division.

The government is currently meeting at Versailles to discuss prolonging the state of emergency. Their goal is increased powers in tracking, following and punishing future terrorists. Depriving offenders of their citizenship and exiling them from France. Last night 2 Daesh camps were bombed in Syria while dozens of homes were raided in France and Belgium. Many have been arrested.

That is what is happening in France. Museums are reopening, stores remain virtually empty, restaurants are full. The show goes on as theaters play to half full houses. The Eiffel Tower is lit bleu, blanc, rouge. News stations show monuments across the globe boasting the same garb, and the French people are very touched by the international show of support.

While putting on a very brave front, many are frightened. A heat lamp bulb bursts and people stampede the street screaming that shots have been fired. This happened in at least half a dozen spots last night. And it is at this moment the true Parisian spirit comes out. Strangers open their doors inviting others in. Refuge is offered with a glass of wine, an understanding hug, a charger for one’s phone.

Our daughter was caught up in one of these crowds. She, a friend and 13 strangers were rescued by a bunch of girls celebrating a birthday. Once safe in the flat upstairs, they checked social media, which confirmed shots had been fired in the Marais (they had not). They called family to say they were safe and asked for news. One street away the bars were over flowing with partiers, oblivious of the mayhem just steps away.

Deciding she was too rattled to get home on her own, we came to pick her up and learned that in the chaos, she had been separated from her dog. Confident the neighborhood was safe, we went in search of her cocker spaniel, spending our adrenaline and proving to her that all was well.

“What did you loose?” A woman called from her first floor window on the rue des Rosiers. She had not seen the dog, but she had collected a trunk load of bags, purses and valuables people had abandoned in fear and was looking out for their owners.

After an hour of searching we headed back to the car. A man stopped us, remembering that we had been looking for a dog. A dog had been found at a café and a patron had already taken him to the vet to have his id tag read. Everyone was looking out for one another and for us. Our daughter was reunited dog and joyous licks ensued.

This morning a friend sent me a text asking to meet at Café de Flore just before noon. At the strike of 12 the maître d’hôte’s voice came over a loudspeaker asking everyone to respect a minute of silence with the nation. Japanese tourists, businessmen, elderly ladies, everyone rose and stood in silence for 60 seconds in a moment of solidarity.

Tonight I am watching my favourite news satire show, Le Petit Journal. The news caster is announcing the name and ages of many of those killed. One of the names is that of a young woman on his staff. Another young woman from his staff, her friend, left the hospital this morning. There is no color left in his face as he speaks of his colleagues.

The list includes names that are French, Italian, Hispanic, Portugese, Senegalese, Tunisian, Moroccan, Algerian… many of the names are disturbing reminders that most victims of Islamic extremism are Muslims.

The Paris motto is Fluctuat nec mergitur , “Tossed but not sunk”. On digital billboards we declare,

United together
Against terrorism and extremism
Love Music Euphoria Joy