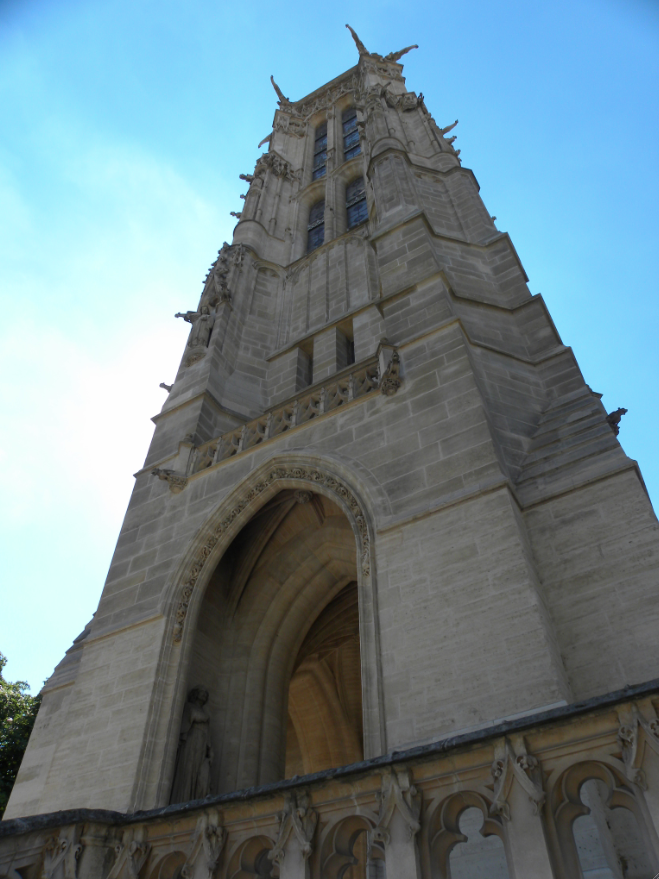 When we moved to Paris, most of the city’s monuments had been scrubbed clean, and reguilded for the millenial celebrations of 2000. Stones the color of chimney ash brightened the skyline, locals would gasp as the glistening gold-leaf of the Opera Garnier. The city had on her very best dress and she was ready to party. And the party hasn’t stopped, with the Palais de Tokyo re-inventing itself as the largest contemporary art space in Europe, the Galliera fashion museum getting a new do, and the Pantheon currently getting a make-over.

One of the longest, most mysterious renovations, was at the Tour St Jacques in the very center of Paris. The tower stood there, all sooty and grey for decades, then disappeared under a white robe for years. And years, and years. The sheath was there to protect passers by, who were at risk of being squashed by large bits of stone that had starting falling off the 52 metre high structure. It became so dangerous the surrounding park had to be closed to the public. 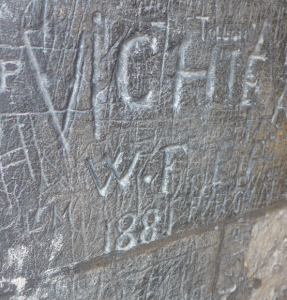 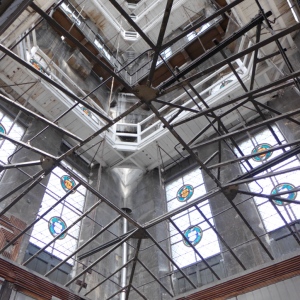 Last year the repairs were complete, the tower was unveiled and visits were possible. Possible but very difficult to arrange, as it is only open during the summer and the very narrow, spiral staircase of 300 steps, can only take a handful of visitors, who must be accompanied, at a time. With a zinc roof, it is also a natural lightening rod, making visits during (the rather frequent) rain showers so risky, the tours get cancelled.

Last Friday, the tower re-opened for the season, and you can bet I was there, not caring too much (well, maybe just a little…) that I was going to be missing the first 20 minutes of the World Cup France – Germany quarter finals.

The tours are organized by Des Mots et Des Arts. The guides are young art historians, with a contagious enthusiasm for history and the tower. I arrived a bit early and waited in the small garden around the tower, the fragrance in the air reminding me of home. More specifically, the parks near the Haight-Ashbury in San Francisco and I was bemused by the number of young people with backwards baseball caps and skateboards learning how to roll their own. 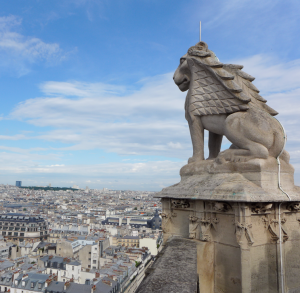 The Tour Saint Jacques is a Flamboyant Gothic bell tower, a modern 16th century addition to a 15th century church, St Jacques de la Boucherie. Boucherie is French for butchery and the church was surrounded by butcher shops and other businesses, including the public writing studio of Nicholas Flamel, who is buried below. For the last 600 or so years, it has been the starting place for the pilgrimage to St Jacques de la Compostelle. Following the French R 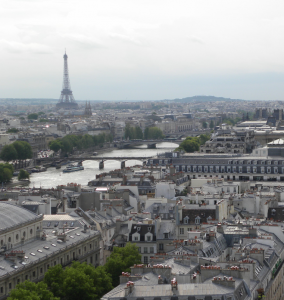 evolution the government owed a lot of money to a local businessman, so they gave him the church and he took it apart, selling the stones off to the highest bidders. Since then, the tower has inspired artists, scientists and intellectuals. Dumas wrote a story set in the park, and it is believed that Blaise Pascal used the site for his experiments with atmospheric pressure.

After learning more about the history of the site you get to go up those 300 steps. But not all at once. There are two landings to explore. One a tiny warehouse for gargoyles, the other an old weather station with spectacular stained glass decor. Going up, the walls are blackened for the soot of lanterns of 18th and 19th century visitors who left some intriguing graffiti along the way.

The views from above are spectacular, with every important monument in sight. Alot of the people on our tour were Parisians, who spent their time above trying to find their homes and locate personal landmarks, reveling in the wonder of having Paris at our feet.

A giant merci to Karen from Inspiration Thursdays for letting me know the tower was open, joining me on the visit and for her fantastic photos!