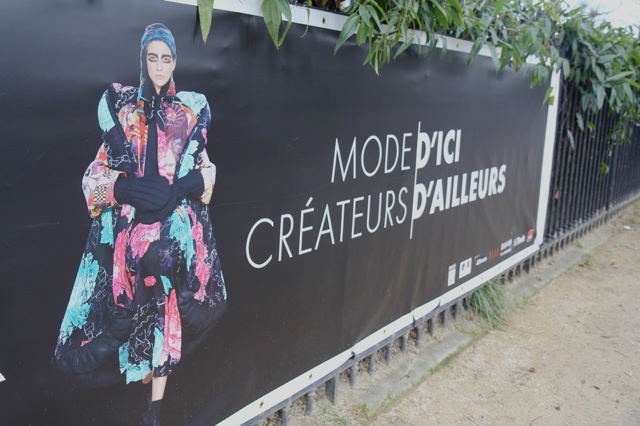 Why yes, please. I’d love that with some ice cream.

That’s what happens when you live here too long. Silly little things turn into abstract bi-lingualisms that are funny to one and no one else. The ultimate inside joke. 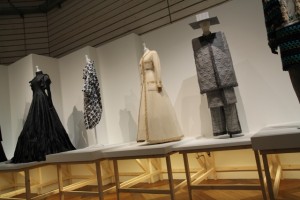 NOTE// no photos were allowed, but I was feeling a little criminal, so a stole a few. Enjoy! 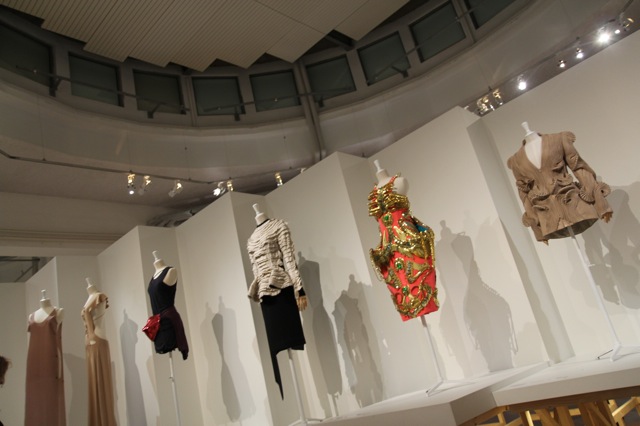 A craving for frozen sugar & fat isn’t what’s put me in such a giddy mood, it’s fashion! Yesterday, I headed to the Art Deco-glorious Palais de la Porte Dorée Musée de l’Histoire de l’Immigration, which is a really long name for a very cool museum on immigration to France. They’ve got artifacts and fish. Yes fish. Because there is an aquarium, too. We didn’t have time to visit it, but my museum date, Karen, started wondering if maybe the fish were all imported, making them immigrants of a sort, too.

We were at the musée to see their latest show, Fashion Mix; local fashion from foreign designers.

Lately, pundits are bemoaning that French ingenuity is dying, or has emigrated to London (the French are calling it the second largest city in France which is funny/tragic on so many levels…). Financial crisis, Charlie Hebdo, an extended “Sales” Season. Paris is going through a time of Existential Angst. But then the pundits site the fashion industry, naming all the foreign designers leading the great French Fashion houses; Lagerfeld at Chanel, Elbaz at Lanvin, Simons at Dior, Slimane at YSL…. the list does seem to get depressingly long very quickly. We’re doomed!

Fashion Mix sets that logic on it’s ear, celebrating the art and creativity brought to French fashion houses since fashion went retail. The show starts with a reminder that the man who first took dressmaking from the lower classes and made it high class was Charles Worth. Vurt? A Frenchman would pronounce, awkwardly. It is rather a mouthful for a Français, because Mister Worth was très, très anglais.

Mr Worth was in Paris working for drapers, but made dresses for his co-worker/wife on the side. Clients would see her gorgeous garb and ask for one of their own. Their French bosses were not impressed and didn’t think it was a very good idea when Worth suggested they go into dress making, so he found a Swedish investor, started dressing Princess Eugènie and a multi-billion dollar, Parisian industry was born.They show Elsa Schiaparelli’s request for citizenship, Cristobàl Balenciaga’s official Basque documents, passports, and papers from designers that have flooded French fashion from Europe, Asia and Africa.

The show goes on to display all the great French fashion designed by passionate Francophiles. It is the ultimate cocktail party with Comme des Garçons dancing by Ann Demeulemeester, Jean Dessès taking a spin by Mariano Fortuny. Old mixes with new, the traditionally staid with the avant garde. 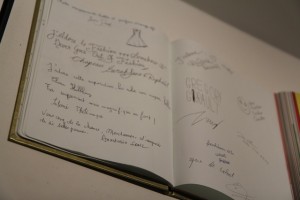 After the show, we’d planned on finding a charming café nearby for some serious girl time, but the Palais was so 1930’s beautiful with mosaic floors and mural dressed walls, we didn’t want to leave. And we didn’t have to because they have a perfect little salon with an excellent tea by Thé des Ecrivains. Sat there chatting, watch the snow flutter by, dreaming of the summer when we’ll be back to appreciate their lovely terrace, over looking the entrance to the Bois de Vincennes.

The party goes on until May 31st, so if you happen to be in Paris, put on your party shoes and cha cha out to the surprising Palais at the Porte Dorée.