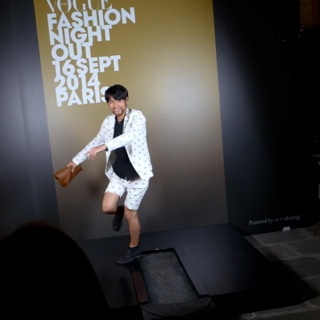 Woot! Woot! Inès was in the house. Roger Vivier’s house for Vogue Fashion Night Out, that is. Absolutely stunning in white pants and a flowing white top, her equally gorgeous daughter in tow. No photos, although the lovely Melissa of Prête-Moi Paris was there and gamely offered to play photographer. 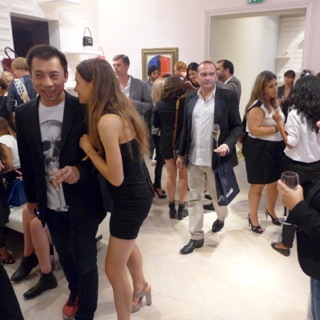 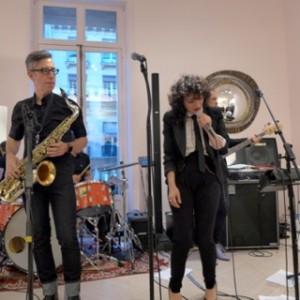 This year, I went out with daughter E and the quite elegant actress/dance Thais, a Brazilian with her own Mr French. We started the evening chez RV, savouring the Ruinart champagne, great music by Yasmine Hamdan, Faty Sy Savanet et Alice Lewis, and mouth watering fashion eye candy. Good thing that stuff is calorie free!!!

It’s such a wonderful party, we could have stayed all night, but the place was packed and Paris is enjoying a very late summer, so we left to get some air.  Next stop Sartore. Like a bucket of ice water in the face, the doorman gave me a hard time about trying to bring along my own invitee (the invites are for two guest), but let us in, anyway. Their space is ab fab, in a cobble courtyard of a 19th century mansion, with plenty of air and the right accoustics to get the party rolling. But the crowd. So sad. There about 12 people trying to look like they were having fun to  sounds being orchestrated by an excellent dj at the plate. Where were the crowds of adoring Sartore boot lovers? Me thinks they’d gone elsewhere once they realized that the champagne was reserved for the owners and their personal friends. Why send an invite if the guest isn’t welcome? Not très chic, mes amis ! 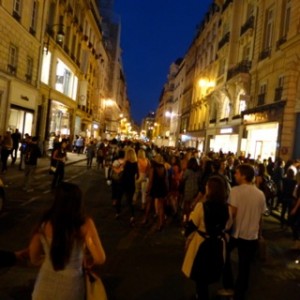 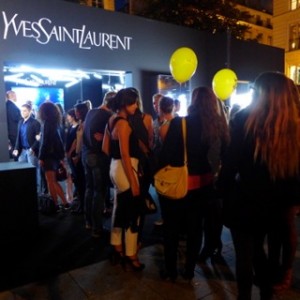 Back out on the street, it looked like a Saturday night. It was such a fun crowd, in the greatest garb. Nothing could make us leave. Except maybe the promise of chocolate. Some really exceptional chocolate from the newest Pierre Marcolini boutique. The man may not be French, but he sure knows how to seduce a woman. There was a handsome greeter at the door, shaking guests hands and welcoming them in to the bright little boutique where we were plied with champagne, offered a taste of cocoa infusion and offered endless trays of chocolate, including his famous red hearts with a raspberry truffle filling. We were smitten.

Unable to resist the man’s sweet nothings, the situation became desperate, either we left, or we were going to explode. We left and head across the street to Moynat for some absolutely scrumptuous cocktails starring Henessey cognac. I was a big sceptic, but couldn’t resist the crystal tumblers sprouting funny thyme do’s. I have to say, I’m a fan! The cognac gave my drink a smokey hint that was almost creamy. Dreamy! And our favorite moment of the night was watching Moynat’s charming Japanese artist paint original icons onto their fun totes. 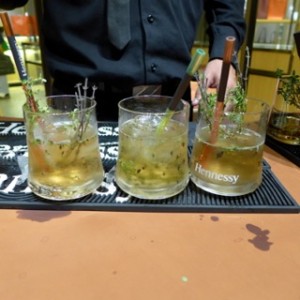 Ready for home, we headed on our way, passing an impromptu catwalk on the way. Fickle as 7 year old girls at recess, we decided that THIS was our favorite moment, watching hopeful fashionistas take center stage on the treadmill to strut their stuff for the world. And oh, what a big, glorious world it was last night!!!

2 thoughts on “Fashion with a passion”