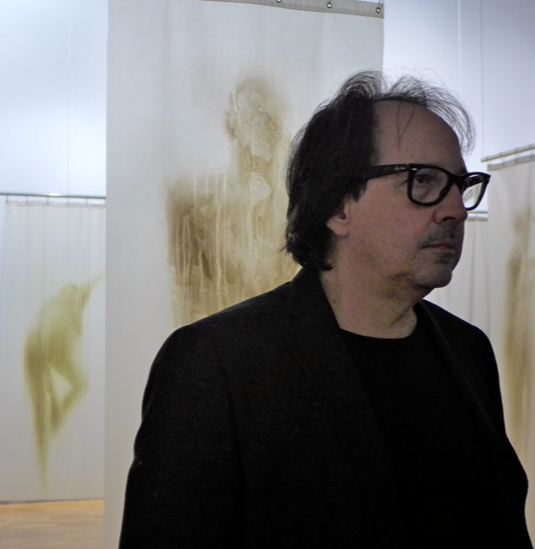 Oscar at the vernissage

One of the frustrations of being a photographer is trying to convey movement in time. Videos do the trick, but lack the discipline you can only get from a still camera. Colombian photographer, Oscar Munoz faces this dilemma with mixed media; printing out still images on surprising materials, creating dynamic images that move the viewer. He is not a photographer. He calls himself a protographer. 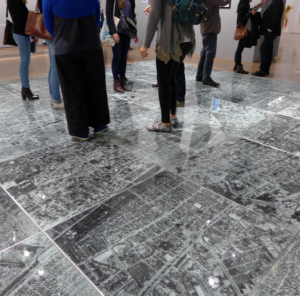 His show, which opened today at the Jeu de Paume, begins with an aerial photo of his hometown, Cali, Columbia that is laid out on the floor, under broken safety glass that continues to break down as viewers enter the exhibition, unable to avoid walking on the art.

In Cali, in the 50’s and 60’s anonymous men would photograph people as they passed by, then develop the images, hoping to selling them to the subjects photographed, much like the photos that are sold when leaving roller coaster rides today. A light table in the corner displays a collection of the photos  that the artist had projected over a river in Cali. 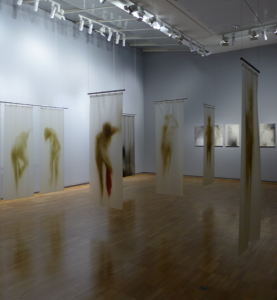 the introduction to another theme. Beyond movement, Mr Munoz’s work is awash in water. Water that cleanses, purifies, erases; his subjects shower, their images printed on hanging shower curtains. Fading images of the dead are projected onto shower floors, drains included.

Which brings us to the next theme. Death. Many, if not most of the photos used are of people who have passed. The anonymous photos from the 50’s and 60’s are just the beginning as the artist projects obituary photos from the newspaper into his ephemeral world. 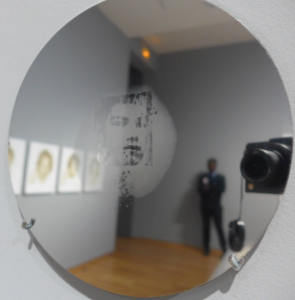 In one room, a row of metal disks line the wall. Exhale your breath onto the disk and the silhouette of an obituary photos appears, then disappears before your eyes, only to reappear again with your very next breath.

A second light table reveals a collection of photos with sinks at either side of the work surface. The image of a hand reaches over the table, grabs a photos and rinses it in a sink, the chemicals washing away, the image disappearing and the now white paper returned to its place. Moments later, the hand returns, grabs the blank rectangle, places it in the second sink, the water returns an the image is washed back on to the paper. It is a mesmerizing moment and a great tribute to modern protography.