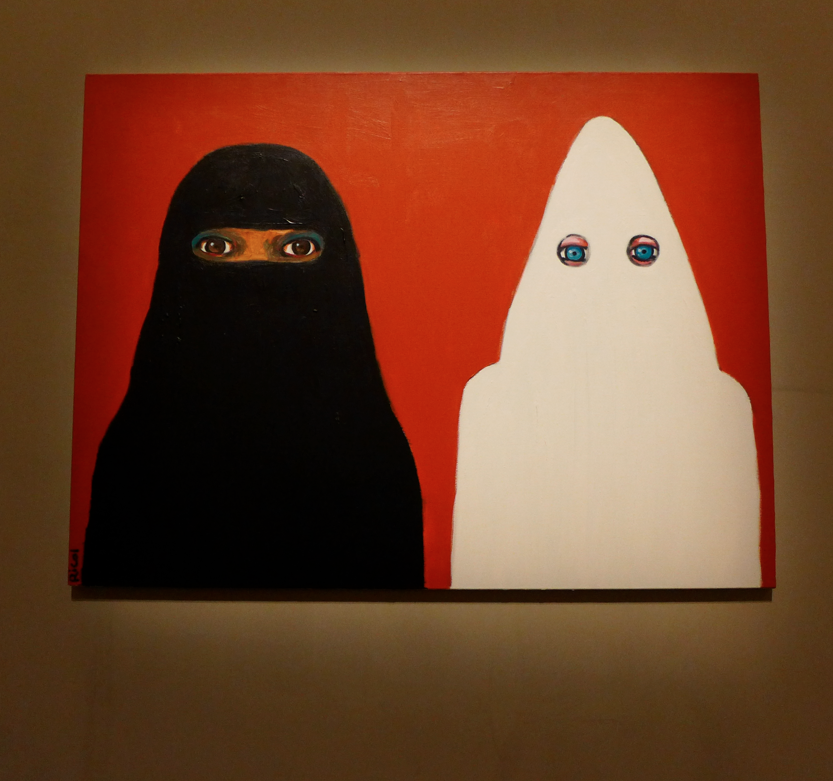 It was not planned, but we saw a lot of weird art this weekend. We started with a walk through the blustery November rains to A Triple Tour at the Conciergerie. François Pinault is a local billionaire and serious art collector, married to Salma Hayek. He wanted to open a museum to show case his art in Paris, but authorities made it so difficult that he ended up acquiring the Palazzo Grassi in Venice and creating a museum there instead. During our visit last spring, I realized that this was Paris’ loss. 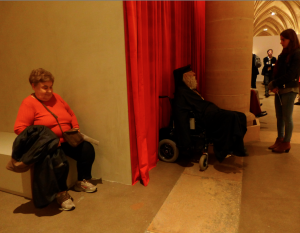 A Triple Tour is Pinault’s first show in his home town and it is monumental in the sense that it is very, very large in scale. Keeping with the theme of the space (the prison that once housed Marie Antoinette), this show was all about imprisonment. People locked up in war zones, prejudice, poverty, insanity and disease. It is not a happy show and this is not beautiful art. It felt like a documentary of social 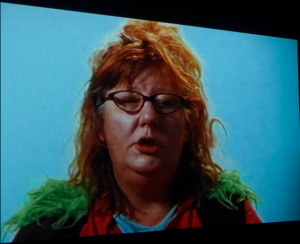 commentary, more than an art exhibition. There was an incredibly moving film of asylum patients and a collection of elderly men in wheelchairs that many visitors thought were real. I can’t say I loved this art, but I could see that it is important art and I marveled at the luxury afforded to men like Pinault who can put on such a show.

After the show we headed across the Seine to the Marais, rue Vieille du Temple. It was not at all planned, but we ended up gallery hopping, visiting one contemporary art space after the other. At Yvan Lambert there was a 15 minute film of a peaceful wood and I loved the rest, but wondered why this was art. Across the street there was a show featuring a man named Erwin Olaf. I walked in the door, muttered, “weird Nazi art” and left, shaking my head. Next door, at the Mexican Cultural Center there was a collection of photos featuring Frida Kahlo and Diego Rivera. It was a highlight of the day.

Even if you don’t like the art, it is fun to visit the galleries in this neighborhood because it takes you into some fascinating buildings and remote courtyards visitors rarely see. And sometimes you’ll stumble upon an interesting show, like the Cy Twombly exhibit at Karsten Greve.

But finding the galleries is not always obvious. I couldn’t find a decent map online to give you an easy link. Every now and again there is a map of all the art spaces available in the galleries, but for the most part, you just have to read the brass plaques at the arched doors, and if you see the word “galerie” walk on in. 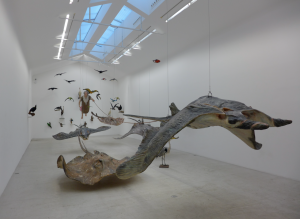 The is what I did at Galerie Perrotin on the rue de Turenne, a gallery I had never heard of before. Inside, there was a large Statue of Liberty, spinning on her side as the flames of her torch ate in to the wall. On the staircase landing there was a mini elevator, barely large enough for a shoe, with doors that would open and close. Fun, but a bit too conceptual for me.

Mr French headed out the back door and disappeared long enough that I decided to follow him into a converted workshop. An elder Chinese lady was floating through space, three manta rays pulling her reins through a flock of birds. In the next room a collection of older folks sat on couches and barca loungers, their heads replaced by large rocks. 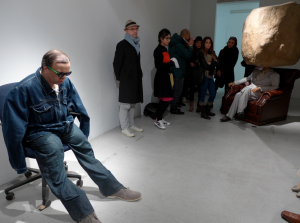 And one odd looking man on a stool. I was marveling as the wax work that created the model’s skin. You could tell the age of the faceless guests by the quality of the skin on their hands. I leaned into to look at the one face int he work of art. “Wow, I declared to Mr French, this looks so real, I can see the skin m AHHHHHH!!!” I didn’t just see the skin move. The entire head turned towards me. The looking man was a dwarf who had been hired to sit as part of the show. If great art is supposed to make you feel something, it worked. I was feeling scared out of my wits!

2 thoughts on “Art for thought”