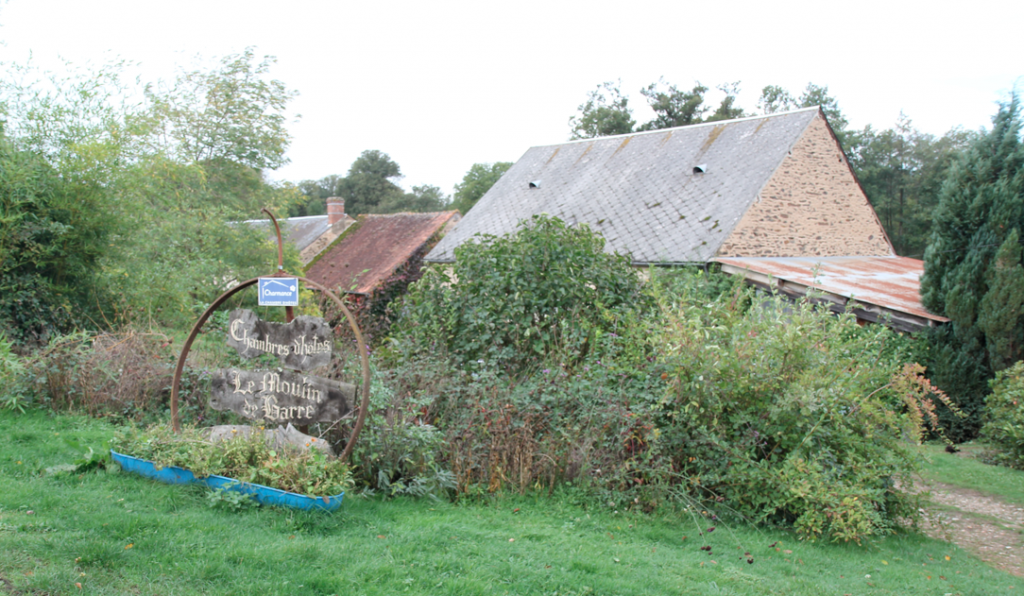 Making it through the hazards of the night we arrived at the Moulin, an old grain mill with a productive hen house and impressive kitchen garden. After checking out our room and washing away the cobwebs we’d acquired in the chateau, we headed to the bright, warm dining room to a welcome dinner featuring farm fresh food prepared by our hostess Doreen. Our English hosts were as warm as their kitchen and even more charming. Another guest, a French man, started asking about their chickens. Did they send them to the butcher, or kill them themselves? How did they slaughter them exactly? He must have felt Cara’s murderous vibes. The conversation evolved and I spoke about a Parisian butcher who had tried to sell me a very expensive pheasant from my coq au vin recipe. “Zat ees not a really coq au vin, zen…. For a really coq au vin, you must have ze blood of ze coq. You can not get ze blood from ze butcher.” His wife’s arms shot up in utter horror. 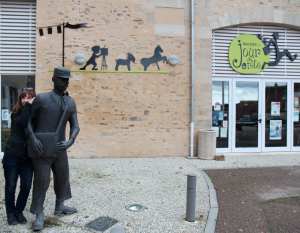 I took that moment to introduce Cara as a professional killer and mentioned that traveling with a mystery writer had made me somewhat paranoid. I was really looking forward to a run in the countryside the next morning, but I couldn’t help thinking that its always the lone female runners that get reported missing and are later found chopped up in the trunk of some lunatic’s car. The room got silent. I heard a fork drop. “It’s not the lunatics you have to worry about.” Cara warned, “Its the hunters.” Everyone nodded in agreement, amazed that I had not considered the negative side effects of getting hit by a stray bullet. 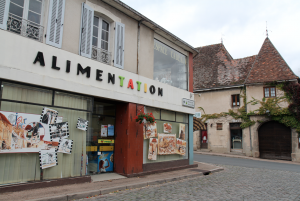 I had taken an extreme dislike to the “other guest”. Even before the chicken inquisition and blood recipe. The next morning over breakfast, I understood that he had talen an even stronger dislike towards me. He kindly informed us that the hunt had been canceled for the day… something to do with kill quotas and that I could go for my run after all. We’d already been late for our delicious breakfast of skillet drop scones, house made yogurts and jams and Cara’s prerequisite coffee, so I thanked him and decided other adventure awaited me that day. We decided it was time to change the mood and headed to St Severin where the hysterically funny French actor Jacques Tati had filmed the comedy, Jour de Fête. As we got out of the car there was a “pop, pop, pop” of gun fire. Loud and not very far away. I considered a drop and roll under the car, but Cara was nonplussed, hunters, she reminded me. So the hunt had not been canceled after all. 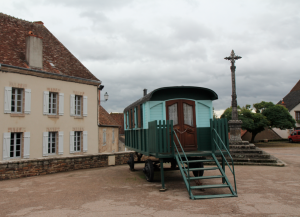 And the “other guest” had clearly hoped I’d find myself mistaken for a loopy deer and shot on site! We headed onto town, admiring the caravan from the film, the historic hall, the medieval porte and all the colorfully decorated stores celebrating Tati.

A local café was open, the kind that would have been foggy with smoke had the laws not changed and where some were on their third or fourth beer (or kir, or Pastis…) despite the early hour. Alcohol. The perfect social lubricant. We started chatting the crowd up, beginning with questions on Jacques Tati and the film before asking what we really wanted to know. The front door swung open. No one was there.” A phantom” warned the bar owner. Were there witches nearby?, we ventured. Yes, yes, indeed. 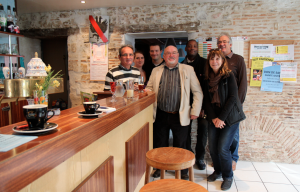 Nobody admitted to having seen something themselves but a friend had seen butterflies alight on the hands of witches visiting La Mare au Diable. And healers? What about the healers? We struck gold as one man was a big believer and had a healer of his own. And the healer’s business card.He confirmed that the magnetiseurs are born with their gift. They can not charge for their services, or they may loose their gift, so patients simply leave what they wish. Often as little a 10€. The can not cure people, but they can absorb their pain and know to be especially effective with burns.

Thrilled at having the inside scoop, we were off. Dodging hunters and their bullets as we sped our way back to Paris. Safe and sound. For now.

9 thoughts on “A murderous weekend, part 2”