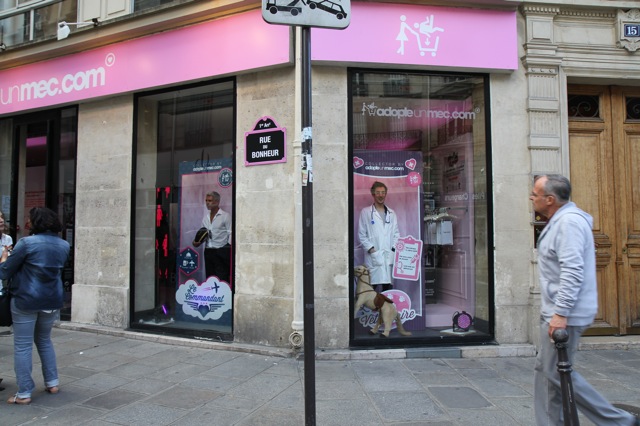 Growing up, I was not the girl with movie star posters on her walls. Luke Skywalker did not melt my butter and I had no dreams of cycling off into space with my very own ET. I was a grounded girl I figured, my feet firmly planted in the rich California earth. Then the Goodfellas came out and I nearly swooned for Ray Liotta. Turns out, I like the bad boys. The really bad boys.

Which is when I realized that us girls, we all have a very particular taste of our own. Someone at adopteunmec.com must like bad boys, too, because she has helped he online dating site go brick and mortar, opening up a pop-up shop for single women. 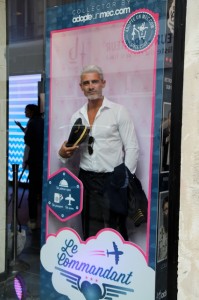 Like human Barbies, the available men are displayed in large, pink boxes, with detailed instructions on the side just waiting to be unwrapped by an anxious young girl under the Christmas tree.

As I walked into the shop, I felt like Barbie herself, the entire Matel universe brought to life with a pilot, veterinarian, gym buff, and surfer dude. As I clapped my hands in glee, I turned to see Thomas, the event photographer who I met last week and who also happens to be a very good friend of La Fashionista (Mr French’s daughter).

“I’m…. I’mmmmmm….. here for work,” he stuttered, pointing to his camera and very hard-to-miss tripod.

“Yes, me too,” very glad to have OutandAboutinParis by my side as chief witness to my innocent curiousity. 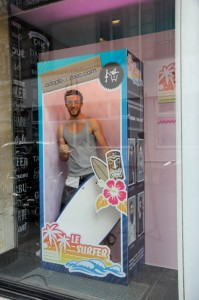 At 15h the place was humming like a night club, crowds spilled out on to the rue du Bonheur, with live music spun by Mr Techni, an open bar and plenty of treats to seduce the girls. Adopteamec gets girls. There was chocolate, and bubble gum pink tagadas, and mouth satisfying Magnum bars to pleasure their fantacies as they popped into a box with the tux clad Mr Chic, or the plugged in Mr Geek.

I had been shooting the IHT early that morning, so I thought it would be fun to get the guys with the paper. Opening the box of Mr Chic, I expected a look of utter horror. I am probably closer to his mother’s age than his own. But this is France where age matters less, and I was greeted with a warm invite. 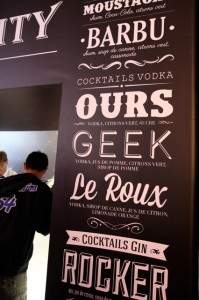 As stereotyoes would have it, Mr Chic held the paper up to pose, Mr Geek started reading and I had to pry it from his hands, while Mr Muscle just held it up to the plastic box, the concept of reading well beyond his imagination.

If you’re looking for a bad boy of your own, Adopteamec is at 15 rue des Halles in the 1st until next week, before hitting the road for the dating capitals of Europe…