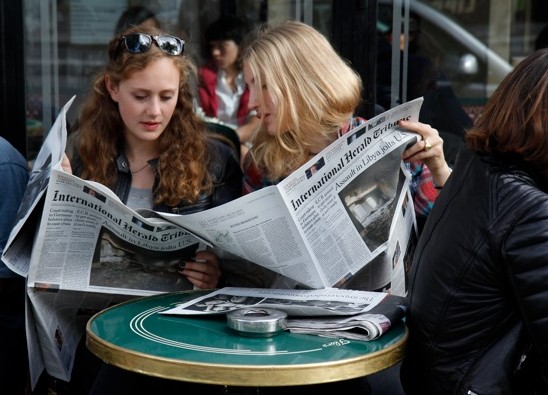 Earlier this week my friend from Out and About Paris contacted to let me know that the International Herald Tribune was celebrating its 125 anniversary, and for the fête, they’ve invited readers to post photos of themselves reading the IHT where ever they happen to be. Then they gave suggestions, “Is that you reading the IHT at Café de Flore in Paris?” 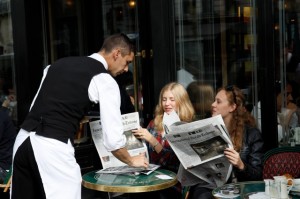 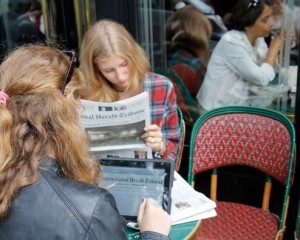 OMG, she texted (not a direct quote, she is far more sophisticated in her discourse) you have GOT to do this for Friday@Flore. Et voilà an idea was born.

If you have not yet noticed, I am still kind of shy about asking people to actually stop so that I can take their picture. It chalk it up to a nasty experience involving me, my Nikon, a Masai warrior and his spear. I brought along two models from home, bribing them with free coffee and maybe a croissant if they were good. 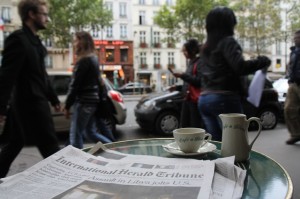 And they were very good, reading their paper, discussing a fold out on The Art of Collecting for the Biennale des Antiquaires that is coming to the Grand Palais this weekend and drooling over the full page Longines ad, sporting the photo of the actor from the tv show, The Mentalist. 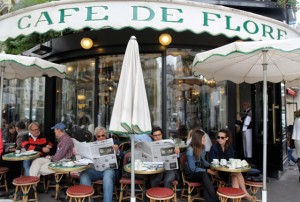 I had really wanted to show that is was the Flore, but for 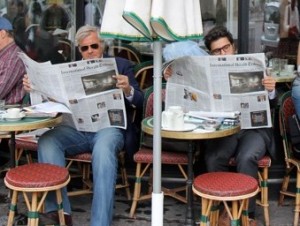 the first time in ages, it was not raining and the awning was drawn. Time for a better angle, which inspired me to approach these two rather dapper Parisiens and ask them to put down their papers (Le Monde et La Libération) to read the IHT for a minute or so. The both complied kindly and I felt that warrior ghost of mine take a strategic step backwards.

Of course, there are more important men at the Café de Flore, so I asked ‘my’ server to be part of the show. He was thrilled to comply, but his co-server was a bit disgruntled that we had not asked him. In the end, everyone had to have their turn! 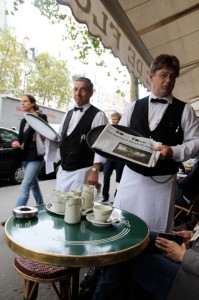 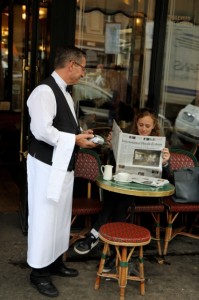 I started thinking of the servers and when the first garçon may have spied an American catching up on international news with his IHT, which is when I learned that the two institutions were founded in 1887. They’re both turning 125 this year!!!

6 thoughts on “Friday@Flore with the IHT”