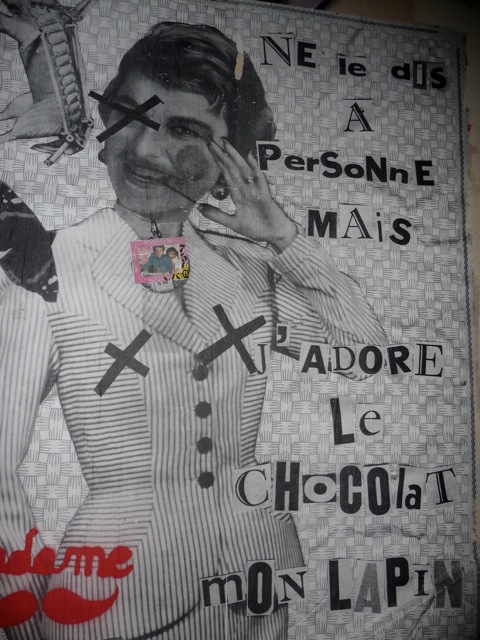 French Jr moved in this week. Its a temporary arrangement as he changes flats, which is something of a shock to the system for all of us. He’s sleeping on the couch, in the living room, just 1.5 meters from my desk, which explains why it is currently 10am and I am still holed up in my bed, computer propped on my knees, trying to sort the sheets of paper from the linen sheets.

It can’t be easy for him, especially when Mr French and I head into the kitchen for our breakfast, turning on lights and clanging around pots before the sun has yet risen. And it is somewhat surreal for my two girls who have never really lived with a boy before. Two teenaged girls who must now share a bathroom with a boy. A hip 22 year old boy.

Day 1 – I go into their bathroom and find not one, not two, but THREE pairs of thong underwear that somehow never found their way into the laundry bin.

“Girls” I shout, “come put your panties away.”
“Relax, its not like anyone is going to see them!”
“Oh yeah, and Jr? You don’t mind Jr seeing your itsy bitsy, teeny weenies?”

3 nanoseconds later the bathroom is spotless, the panties gone, zit creams hidden and sanitary items put in their proper drawers, instead of left in a box on the floor. I can see that I am going to enjoy this.

Day 2 – Mr French has a business dinner and I’m headed out to test Le Grand Pan (excellent btw) with a girl friend. The three kids have dinner together. Later that night, after yelling at the girls for not having taken care of their dinner dishes, I ask them how the evening had gone.
“Horrid,” replied one or the other. “We couldn’t watch a show, or, like, do anything. We just had to sit there and talk. So annoying” Films during mealtime are forbidden, as is singing at the table or dancing on the chairs, but they seem to forget this at every meal so dinner is often a chorus of “No singing at the table”. I’m considering giving the new situation an FB Like.

Last night – We book the tickets to visit E in Chicago this October. M is thrilled and starts packing immediately. There is a moment of total panic when she realizes her leather jacket is missing. I have two younger sisters, lived in University dorms and M is my second daughter. I don’t exactly go into panic mode over missing accessories, unless they are my own. A few phone calls later and she remembers it had been lent to T who accidentally left it at E’s, so E brought it home and it is now at N’s.

I’ve had enough, so I head up the hall into the living room where Jr is deeply invested in his social media. M comes tearing after me. “Moooooooomm, it’s  CA-Ta-strophe!!! We’re going to have to get me some new bras in the US, haven’t you noticed, look my boobs have grown.”

The next sound in the house was a short, dry “Oh” followed by the scurry of mortified footsteps heading back down the hall. Je suis mdr.*

* I am mort de rire (dying with laughter)