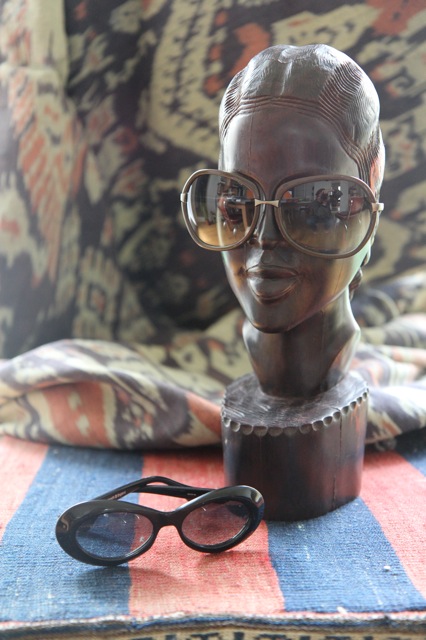 Well, not really, but like him, I am obsessed with sunglasses.

When we first moved to Paris I owned a great pair of lemonade-green Ellen Tracy’s with a serious 90’s flair, a ne plus ultra pair of Giorgio Armani’s from the 80’s and I was soon offered a hipster-cool (before hipsters were cool) pair of blue tinted Italian shades. I lacked fpr nothing, but I really, really wanted these very great tortoiseshell Persols. Really, wanted them. Some times I went to sleep thinking about them, petty girl that I am. But as my daughter’s strict Irish nanny would say, “I want gets you nothing.” 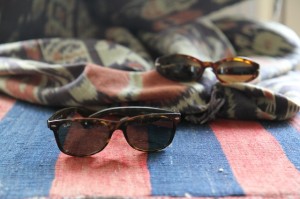 That spring I chaperoned my daughter’s class to the Luxembourg gardens to watch Brazilian dancers perform for La Fête de la Musique. As we strolled through the park, chatting and herding kids, a teacher came up to a group of us declaring “Tiens, look what I found!”
She was holding a pair of “my” Persols!
“Wow,” I declared, “those are excellent glasses. Perhaps we should bring them to lost and found?”
“Are you nuts?” scoffed la parisienne, “that would be giving a gift to the park staff, they’ll just keep them for themselves.”
With the thousands who passed through the park each day, I kind of saw her point. “Well,  keep them, they’re awesome.”
“I already have this model. Do you want them? If not, maybe Catherine is interested.”
Ethical dilemma. I was still thinking we should return them, but there was no ‘we’ and if I didn’t accept the offer, Cat would. “Oui, merci” I gulped. 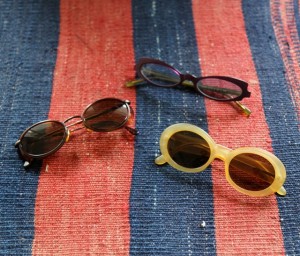 A few years later I mention to Mr French that I love the perfectly designed Tom Ford glasses that seem to have crossed the bridge of every fashionable nose in the city. He thought I had a point and start talking about less sporty, more stylish options. The Ford model was just a bit too popular. We headed to JLC which specializes in fashion forward models from fantastic designers who are discreet with their logos. Most of their collections are not household names. I tried on a pair of Barton Perreira Centerfolds and it was clear I’d found the perfect fit.

Then I started running. Buying new sunglasses struck me as frivolous, but my mind would wander, telling me that a classic pair of the ubiquitous, yet cool Wayfarer Ray Bans would be ideal. M was in Montreal for the summer. At 13, she had some very trendy blue plastic Ray Ban aviators that she loved. She called from grandmère‘s. “Mom, Mom… we were at Walmart shopping for beach towels when Grandmère found a pair of Wayfarers under the display stand. She said that it was no use turning them in to lost and found, they’d only keep them for themselves.” Yes, grandmère is a parisienne, born and bred. My daughter came home from her holidays with a fantastic souvenir for Mom.

After all that, it is somewhat shocking that I still bought another pair of sunglasses. I was strolling the Marais when a pair of Audreys caught my eye. I had never seen a pair of sunglasses that looked so much like the pair Audrey Hepburn once wore. I went in and learned that I was not far off from the truth. Oliver Goldsmith made glasses for Audrey in the 60’s. Recently, his grand-daughter set-up shop in London and started selling Granddad’s designs to addicts like myself, looking for a great vintage look that never grows old.

2 thoughts on “Ode to Corey Hart”