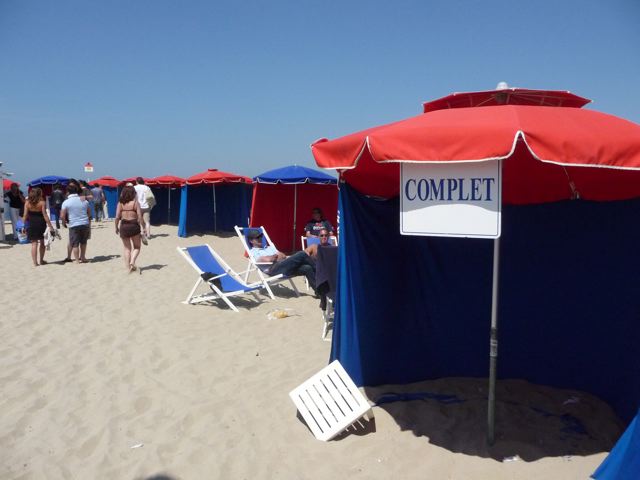 The 21st arrondisement, that is. What? You didn’t know Paris has 21 arrondisements? Understandable, given that it is never spoken of and not on any of the maps. It must be one of those French things, like knowing that you pronounce the city Paree, but my lawyer friend, Bruno Paris, is Monsieur Pareace. I’ve given up trying to understand.

But I do understand the 21st arrondisement. It’s a joke about the seaside town of Deauville, in Normandie. A short 2 our car ride, or a direct train trip away from central Paris, Deauville is a luxurious burst of fresh air for city rats needing to breath. With a casino, large luxury hotels, horse racing and the American Film festival, Deauville has the reputation of being quite luxurious, indeed. Having an Hermes boutique not far from Bruno Cucinelli and Louis Vuitton does not help dispel the thought. But this is only half the story. 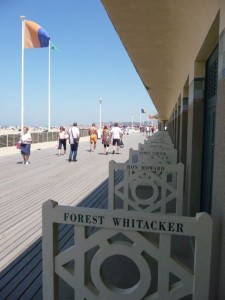 Deauville is really not far from Paris, easy to reach, a great place to picnic and the beach is  free. Running along the beach in the early morning (early morning in France is 10am) this Sunday, we heard Vietnamese, Arab, Yiddish, Portuguese and a few African dialects, mixed with British, German and Dutch from every socio-economic class. Many of the people we passed were unloading their cars, having driven up from Paris that morning. Like us, the were in town for just the day.

Mr French and I do this trip fairly often. Getting up early in the morning, we dress in our running gear, throw two groggy teens into the back seat and head on up. As soon as we arrive the teens set themselves up in a café on the boardwalk, while we run. An hour later they dive in with us at the indoor sea water swimming pool before heading off to lunch.

Lunch always creates a heated debate. I love Les Vapeurs in the neighboring town, Trouville, just a 20 minute stroll away. Mr French is a fan of Les 3 mages in Tourgeville, 12 minutes further down the boardwalk. Les Vapeurs is on a crowded port and Paris socialites squeeze on to the terrasse with tourists and locals, everyone savouring the exceptional butter (butter HAS to be great for a Parisienne to dig, this one is legendary) before digging into perfect moules frites. It you’re feeling flush their grilled lobster is PERFECT.  Les 3 Mages has a large, wind protected deck on the beach, with exceptional seafood platters and good (not great) food. Both are a welcome break after our sporting frenzy. 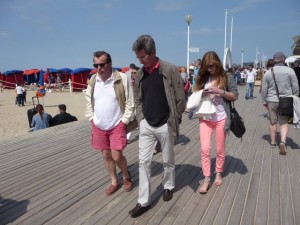 Lunch is generally followed by a stroll into “town” or a siesta on the sand. This weekend we had a great time on the beach listening to some local (Parisian) kids playing soccer, as they made fun of the yuppy looking bourgeois Parisiens on the boardwalk with their Italian loafers, Lacoste shirts, long pants, Ray Bans and a sweater across the shoulders. These kids were of African decent, with one Arab friend, who they called the Hallal Pig. Who needs tv when you can go to the beach in France?