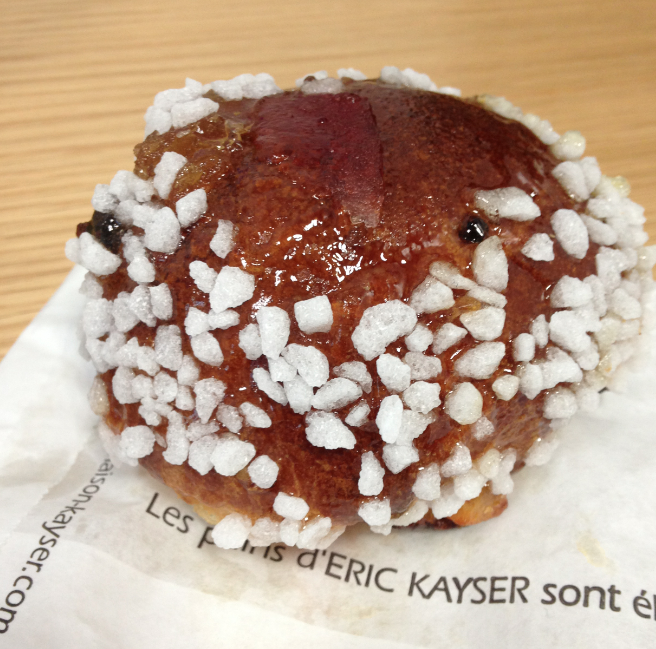 The 12th day of Christmas is the Epiphany. I don’t know much about the Epiphany and I could Google it if I cared, but all I really care to know I have learned in French bakeries/ The Epiphany has something to do with the 3 Kings, who I had always thought were wise men, but I am sticking with kings in this story because in France we celebrate this holiday with Kings cakes. Cookie Monster can have his way with sawdust disks, me like Kings Cakes.

In Paris the Galette des Rois is a disc of puffed pastry stuffed with almond paste. David Lebovitz claims their easy to make in this blog post. For now, I am taking his word for it. Not because I’m lazy, but because the only thing I like about Parisian Kings cakes are the tiny porcelain prizes hidden inside, and the crown. I love wearing the crown for the evening.

You’d think that would be a major relief to a girl looking to reduce her waste line (that’s a pun,not a typo, for a change), but the crafty guild of Parisian bakers have another Kings cake to tempt aimless souls like my own. In southern France the Galette des Rois, becomes the Couronne des Rois, the Kings’ crowd. A simple brioche, perfumed with orange blossom water and studded with candied fruit is shaped into a crown, baked and dressed in sugar crystal diamonds. A girls best friend indeed!

After 3 months of living without wheat flour, yesterday I could not resist this scrumptious treat and splurged on a little individual bun that was sitting in the window at Eric Kayser, immediately facing the metro exit I use coming home at the end of the day. I didn’t even make it home, sneaking (and savouring!) guilty bites while picking up some fresh fruits and vegetables for the house. It was truly fit for a king.

So divine that I have had an Epiphany of my own; Time to change metro stations!

One thought on “long live the king.”