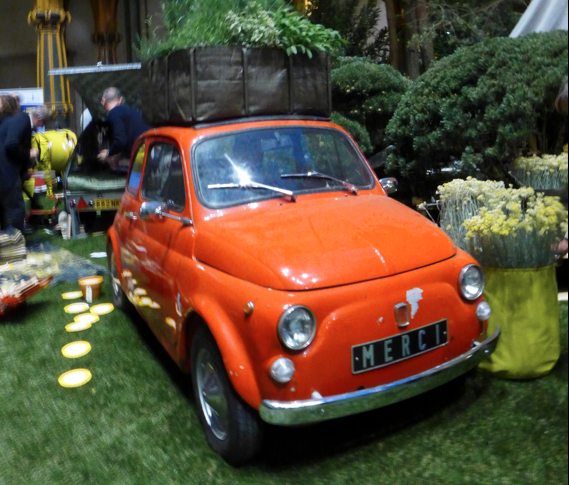 Parisiennes get to be a certain age and they start asking themselves if they wouldn’t be happier with a car. The arguments are sound; a private car is smells infinitely better, nobody is crammed up against you and they tend to be pickpocket-free. In theory, you can let your guard down (when parked, of course) for a few minutes each day as you savour a moment ALONE, nobody impeding on your personal space.

Recently, I had to slip behind the wheel to drop off a 100lbs stereo for repairs and I pulled out of our garage wondering if I this wouldn’t be a fun little habit to get into. I set the gps for the shop, just 1 km from our flat, but 1.5 km away, thanks to one way streets. I’d known before heading out that parking on the shop’s narrow, cobbled street would be next to impossible, so I’d arranged to have the owner wait for me as I pulled up. Within seconds he had popped the trunk and carried off the stereo, but I already had two generously patient drivers stuck behind me.

I now had to find a proper place to park. A spin around the block showed that every corner was taken by illegally parked cars with their hazard lights on. After the third tour I followed suit, stopping in a delivery zone just long enough to run in and sign for my drop off. There was barely time for a courteous. “Bonjour, monsiuer, merci, bonne journée.”

Whew. Mission accomplished. The way home was a direct shot. I headed up the longest street in Paris, veering left as a large AVIS van nearly backed up into me. I had a car behind me and he had a busy boulevard behind him. We finally managed to back out of the street and I saw that a construction crane had set up in the middle of the road. No signs had blocked off the street, there had been no warning.

Hakuna Matata they say in Swahili. No worries. I knew a detour. Back up the boulevard and left about a kilometer later. Again, a large van was blocking the road, and more importantly, the view. I missed seeing that the street was under construction, forcing me to back up into a busy boulevard for the second time in 10 minutes.

By now, I had traveled 3 km from the shop and was 2 km further from my home than when I’d started. Another left turn, this time the street was clear. Until a taxi stopped and an elderly lady spent 5 minutes getting out. Then there were two construction obstructions and a small traffic jam caused by exuberant shoppers.

I parked the car at home. It had taken me 33 minutes to complete a 1km journey that I could have walked in 12 minutes. No wonder I love being chauffeured around by Mr French, taxi drivers and the fine (wo)men of the RATP.