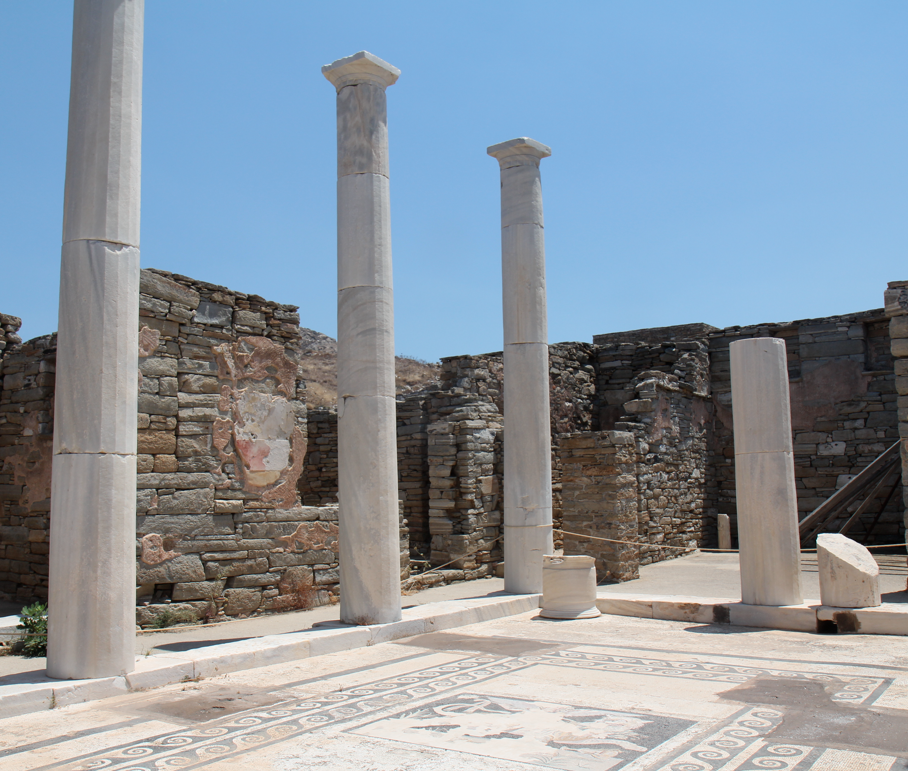 While the town was not necessarily our thing, we spent two absolute dream days at Mykonos, three if you count our Date Day.

The First Adventure was with Sunfos Alessia Yachting, aboard a two cabin boat with Alessia and her captain on a private excursion to sail to a deserted beach on an uninhabited island. It was the calmest day locals had seen in weeks with mild 43 mph winds. Which means we were doing an exhilirating 8-9 knots throughout the day.

After a brief conversation the crew realized that not only did Mr French love sailing but he is actually something of an experienced sailor, so they gave him the helm. 2 metre high waves crashing behind him. Thrilling!!!

We passed an island, rounded a corner and paradise was before our eyes. A lone beach just for us. We set anchor, dove in and swam to shore while Alessia nd the captain prepared our lunch. Greek salad, spaghetti and fresh melon. I’m not sure what it is, but throughout our travels in Greece, we came across nearly as many Italian restaurants as Greek ones. Mr French was thrilled for the change in diet and I’ll admit that the pasta was cooked to perfection, but, well, when in Greece…. 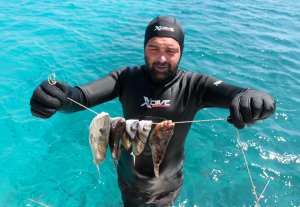 After lunch we returned to the water for some snorkeling while the captain headed out spear fishing for his supper, spear. He was proud of the assortment of fish he caught and they were both thrilled with the seashell he brought up. We think its called a pinha… looks like a ginormous mussel painted amber and it is enjoyed raw for its sweet, nutty flavored meat, that they generously to share with us.

Heading home, the boat seemed to sit 45* to the sea, for a thrilling ride back to land. 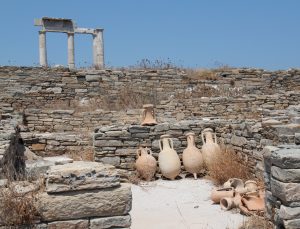 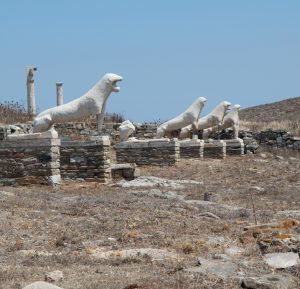 During this adventure Alessia recommended a visit to Delos. Thus began Adventure Day Two, a tourist excursion to Europe’s largest archeological site. Had I’d planned this bit on my own, I’d have probably just purchased boat tickets and tried to see the island on our own. Instead, we asked our hotel to take care of it and they made sure we had a guided tour, which was fantastic, bringing the visit to life. It was amazing as we stood there imagining the 30,000 people who had lived there nearly 3000 years ago, or the 20,000 deaths that occurred when the city was invaded by Mithrades. Wine vessels that had been buried in the ashes of the attack lay against abandoned was. Greek columns stood in solitude under the baking sun while lions stood guard. Archeologists have identified the homes of local aristocracy and fish mongers, temples and wells. An Egyptian temple to Isis marks the way to the summit of what was once a holy mountain while below mosaics of masked men, tigers and dolphins decorate homes that have not provided shelter in centuries. Nature is slowly reclaiming her land from man and the result is astounding. So amazing, in fact, that after several hours of hiking under the brutal sun, we were sad to hear the arrival of our boat on the last departure of the day, wishing we could have stayed to explore more….