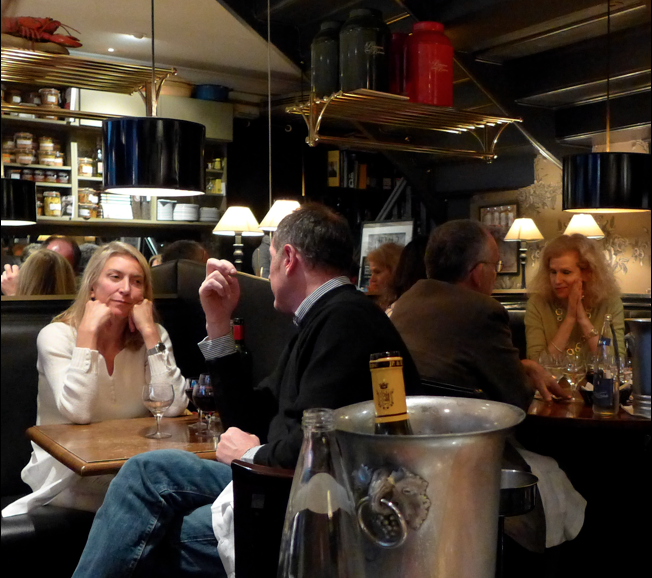 I’ve been rather delinquent about Friday@Flore. The truth is, it is not easy taking those photos. If I stop and ask people, I am setting myself up for a major dose of rejection, as 2 out of 3 locals say no. If I don’t ask my photos are just okay, and a post of just okay photos does not exactly fill me with pride. So this summer, I am giving myself a break as I figuring out how to tackle street fashion photography in Paris. 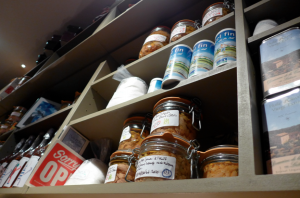 In the meantime, I’ll be running Date Night. Makes me feel more secure, as Mr French rarely rejects me or my advances and should be inspiring for you, if you like food even half as much as I do, because I’ll be featuring some of my favorite restaurants. Last week it was Le 21.

Le 21 can be found at #21 rue Mazarine, which means this black painted, curtained clad store front is shrouded in mystery. There is no name to declare proudly for passers-by. Just the address, a large, white 21 painted elegantly above the door. In fact, it is so discrete, that I only found the place because I was early for a date with Mr French at the Prescription bar next door and spent a bit too much time loitering outside. It was clear, as the door opened and someone entered, that something special was going on inside.

The discreet entrance says a lot about the chef, Paul Minchelli who once reigned over the stove tops at the Michelin starred Le Duc in the 14th and the glitzy, ritzy Minchelli in the 7th. It was all a bit much, so this man, who is a master with fish and seafood hung up his apron. But his clients simply could not bare the thought of Pais without his cooking and insisted that he continue on, providing him with a cozy little bistrot to work from.The walls are lined with shelves that hold funny objects (I’m pretty sure he has that trout that sings “Take me to the River”) and house made preserves. 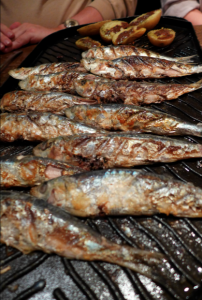 Le 21 is in tourist central, but on most nights the dozen tables are crammed with locals oohing and aahing over the perfectly prepared fish that remind us of our summer holidays by the sea. This is a real chef using the freshest of ingredients, so the menu is brief; only about half a dozen entrées and just as many mains. But who cares when each morsel is pure perfection. Mr French is partial to the chef’s version of fish and chips which is not like any fish and chips you’ve ever had before. The fish is poached and there is an egg involved and it all adds up to a savoury, gooey wonder.

I’ll never for get the sea scallops I had on my first visit. Steamed on a bed of seaweed, the lid removed at your table, the smell of the sea washes over you. A sublime moment for a sublime meal. On our last visit I opted for a personal favorite, grilled sardines, which is served on a sizzling grill, each bite sending me back to my very first French Sardinade in Brittany. It was so good I couldn’t bear the thought of dessert.