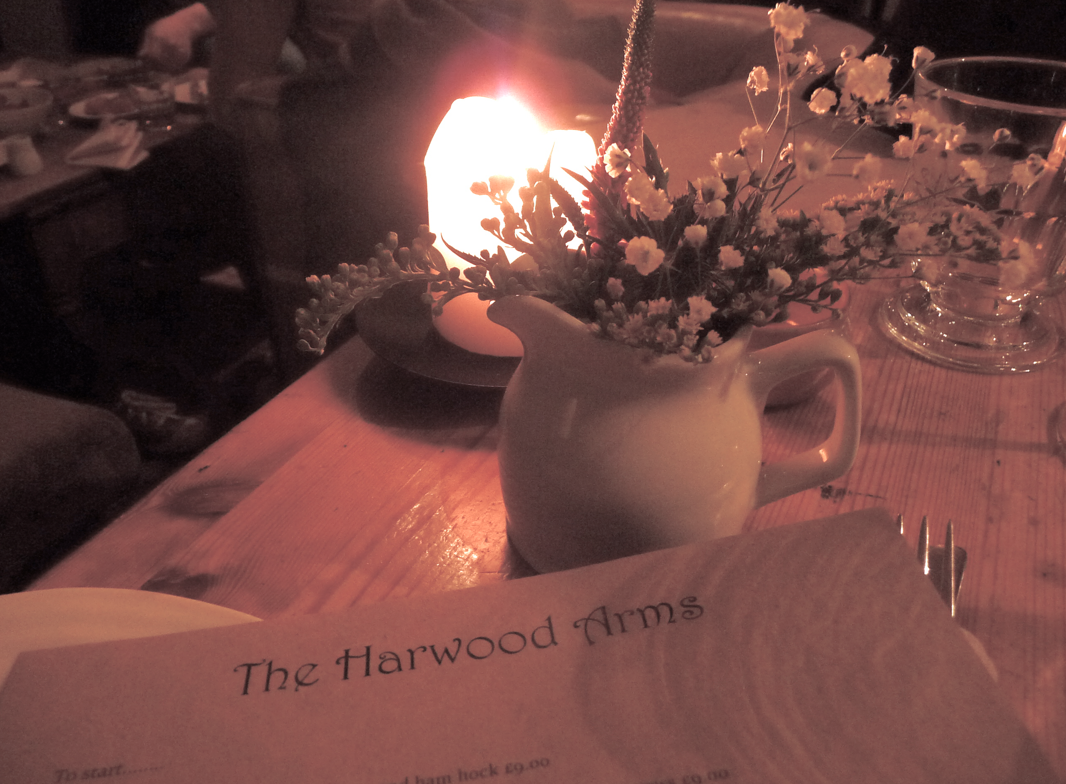 As much as I love French cuisine, one of the highlights of every trip to London is the food. This wasn’t much of a draw 20 years ago, but today, with fresh ingredients and heirloom vegetables getting pride of place, things have changed considerably.

For years now, I’ve been curious about the Wolseley on Piccadilly. The posh looking establishment simply oozes old world elegance, greatly enriched by its location just steps  from the Ritz. The windows are covered with bistro curtains, and every time I’d pass, I’d look longingly into the italian inspired decor where a chicer-than-thou crowd seemed to be having the time of their lives at the bar.

Fortified by my new umbrella, and Mr French’s company, this trip I felt chic enough to breach the entrance. A formally clad valet met us on the sidewalk and guided us inside. Inside I quickly observed that the bar was merely a tiny box in a very large, opulently Italianate, art deco restaurant. The Wolseley had been a car for the rich who were not quite rich enough to afford a Rolls, and this had been the showroom. A very handsome and charming host showed us to the bar, informing us that the dining room was fully booked, but they did have tables for walk-ins, if we were interested. “Yes, please!” I replied, completely seduced by this place. 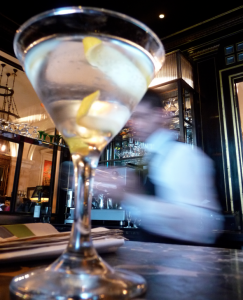 It was only noon and the bar was hopping. One of three very professional barmen put his everything into mixing the perfect martini for Mr French, while I was thrilled to find that they had hot lemon juice on the menu. I got to have something that felt infinitely more grown up than Perrier, while staying fit.

We were soon seated in a small dining room and a funny thing happened. The waiter spoke to us in French. He had heard us speaking, and being French himself, it did not occur to him to address us in English. The menu was French as well, with dishes like coq au vin and croque monsieur. But there was also roast beef with yorkshire pudding and wild Scottish salmon. The food was good, but nothing I’d run back for. The scene however, simply fun, as we sat next to two Sloane rangers and a very wealthy local Indian family. I think next time I’ll come back for tea time, or perhaps  I’ll try for something more wild at the bar…

For dinner, I had done some research, ie I sent a tweet to @jeffreyinmotion a professional in the UK hospitality industry. He gave me the name of a few places and the Harwood Arms was the first on the list to have availability. The menu looked good, and that was good enough for me, so good, I never bothered to looked at where the Harwood Arms is on a map. 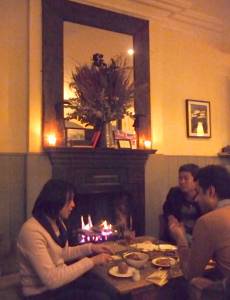 Its in Fulham. You’ve heard of it, non? Well, me neither. Mostly because it is a bit remote and far from the tourist path. In Paris that would not be a big deal; have metro, will travel. In London, it’s a deal. We got off at a station to change trains and learned over the loudspeakers that our train would not be stopping at that station over the weekend. Back on the train we tried to connect at another station, but there were five different terminus possible and I got us on the wrong train. We went one stop and got back on to go back where we’d come from. A one stop error cost us 40 minutes of our time and I was very happy we’d planned on arriving early to enjoy a drink at the bar.

Getting out of the tube at Fulham we were in London, but had the impression that we’d stumbled into a sleepy little suburb. Mr French looked at me skeptically, teasing, “I hope you know what you’re doing.” I had no clue, but I wasn’t going to tell him!!

Following the street maps that were helpfully posted every 100 meters, we soon found ourselves on a quiet residential street. I started to panic, but Mr French noticed some bright lights ahead. As we got closer and closer, he became confident that we were in the right place. And we were, in so many ways.

A light, airy restaurant that simply oozes with a relaxed, friendly vibe. The decor is quaint, with wild flowers on the tables, a deer’s head mounted on the wall and black and white photography of ammunition. It was the British version of Brooklyn Hipster. After a weekend of good behaviour, I was ready for a truly London cocktail. I was at the wrong bar for that and instead I had a lovely glass of white wine. A really large glass, because it turns out that a British “glass” is 1/3 more generous than a Parisian “verre”! Behind us burned a cheery fire, with guests nestled into leather couches. They were snacking on outstanding bar food; a venison scotch egg, honey roasted nuts with rosemary, cauliflower croquettes with picallili and garlic potatoes that made me melt with hunger from tables away. 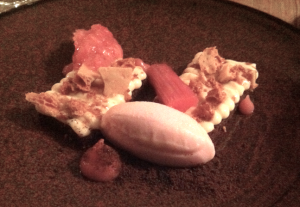 The dinner menu changes with the seasons. Now here is the sad part. I forgot to take a photo of the menu and I was somewhat tipsy from the wine so, I don’t exactly remember everything we ate. Mr French had deer, I had fish then we shared a light rhubarb desert and there was a lot of ooh-ing and aah-ing. It as all truly delicious. Mr French (who was completely sober) assures me we’ll be going back!