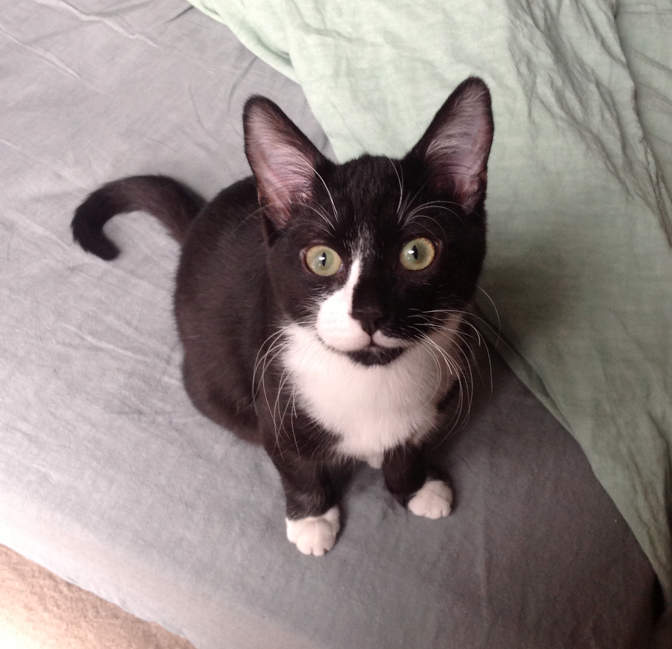 Ladies and gentlemen, may I present to you Rocky, our new chat. Kitten really. And its Rocky, as in the Horror Picture Show, not Stallone.

Getting a pet in Paris, you learn a few things. The most surprising thing is that in France, each year is assigned a letter and pets are given a name that begins with the letter of the year corresponding to their birth. Rocky was born in 2012, so his name starts with an H.

This tradition started in 1926 when the official dog breeders association wanted to get a better handle on purebreds to start a « LOF » (Livre des Origines Français). So basically this rule only applies to people that insist their wine be AOC, and not for folks like us who pick up a scrappy moggie (that is cat for mutt) from a lady in Dammartin-en-Goële.

And how did we find the lady in Dammartin-en-Goële? Well, “we” did not want a cat. Neither Mr French, nor myself, but Em was able to convince us that it was of most vital importance she has a cat. Convince is not exactly the word. She waged a battle and we survived under siege for four years! Our terms of surrender were clear; you’re not getting a pure bred, this is a cat, not an accessory. Pet shops are out of the question and it will be your cat, so you feed it and clean the litter box every day.

“Everyday? I though you can clean a box just a couple times a week?” No! Chez nous, it’s every day!!!

Em agreed, signing in blood before turning to the SPCA for a stray, but she had a hard time finding one accessible by metro that had kittens. Being a resourceful girl and really wanting a cat, she started calling up all the vets in our hood, which is when we learned fact number 2. There is a season for kittens, and January is not that season. I know, its logical when you think of farm animals and wild animals, but there are so many stray cats out there, who would have thought it applied to them, too?

Two vets recommended the cat lady in Dammartin-en-Goële (I love that name, tried googling where it came from because there is that tantalizing Goële, evoking jails and dungeons, but all I learned is that the once lord of the land was friends with Joan of Arc). So we called the cat lady to learn about her kitten. Instead of getting info on the cat, I was put through a rigorous interview to see if I was a worthy cat owner. She was spitting out rapid fire questions about the size of our flat, our work habits and vacation plans for the next three years in accented French as I walked past the construction crews on the rue du Cherche Midi, balancing my handbag, a computer bag and a box of cupcakes on my way home from work. We passed the test and were invited up to get the cat on a Saturday.

Madame lives with 14 cats of her own. She found Rocky’s mom early last fall. She was pregnant so she took her in and raised Rocky and his sister until we came along. When she is not taking care of her own cats, she has founded a charity to spay all the strays in her vicinity and she feeds about forty of the local strays up by the church, providing them with iso-therm huts she creates from boxes that fish mongers donate when they’ve off loaded their deliveries. She is with cats almost exclusively, so she was very happy to see us, nearly devastated when she learned we’d have to leave before lunch and cried when we drove off with Rocky.

Em has passed the two week test, which is how long Mr French thought it would be before she stopped taking care of her cat. He is adorable and we’re all charmed by his crooked smile. At night we watch him instead of the tv and he sleeps with Em, his paw in her hand. But I promise, unless he starts wearing Hermes or starring in a film playing near you, this is the last you’ll hear of the cat. Blame it on the detox, I’m feeling sluggish this week.