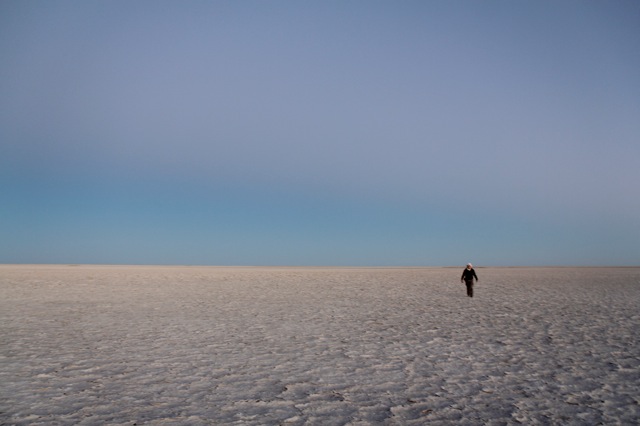 Two years ago I was sitting with my friend, Marie-Louise planning a holiday. Smart AND and beautiful, with impeccable taste, the owner of Tselana Travel is one of the most exquisite Parisiennes I know and on that day she had an even more spectacular glow. I asked what was up. Was she pregnant? Did she have a secret? 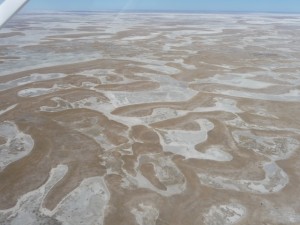 “Non, I have just returned from an absolutely breath-taking place, the Makgadikgadi salt pans. We spent a night out on the pan in the middle of nowhere. It was indescribably magical.”

“BING” at that moment I became a bit more French; I started planning our next vacation before we’d even settled on an itinerary for this one… so many vacation days, so little time.

The Makgadikgadi pan is the size of Switzerland but it is in Botswana. Marie-Louise’s rave reviews are one of the reasons we came here. My love of Africa, Mr French’s passion for the desert, and The No1 Ladies Detective Agency are some of the other reasons. 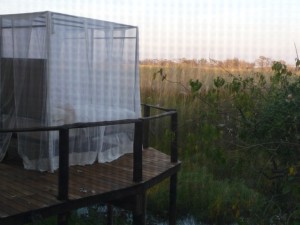 Our canopy bed, on the deck

Our trip began in the Okavanga Delta, considered to be one of the largest oasis in this world with about 11 cubic kilometers of water per year (its alot of water). One of the unique things about this area is that it floods during the dry season, thanks to a flowing river in Angola that takes its time getting to the region, and this makes for spectacular wildlife viewing and  bird nerd heaven. 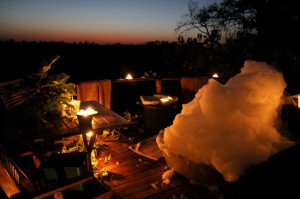 While in the Okavanga we stayed (with Harrison Ford) at Sanctuary Baines Camp which, in addition to being a very nice place in the middle of the all the action, has some fantastic features. Like the Living with Elephants project, Land Cruisers with snorkels, a canopy bed on wheels that they can roll out on to your private deck if you want to sleep under the stars, or the opportunity to have the bath of a life time under the Africa sky. 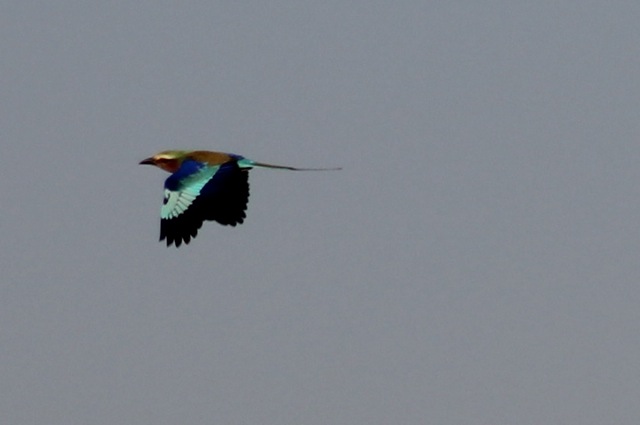 We then went to Linyanti, a Delta river, crossed by the Savuti channel that was dry for decades and has recently replenished, creating an absolute paradise for all living things. Including some of the last African Wild dogs on earth and a really adventurous pride of lions that added some fantastic drama to our trip.

Our lodge there was Duma Tau, run by the über professional team of Wilderness Safaris. So professional, that we barely noticed when we changed lodges during our stay.

We went out for one of the most remarkable game drives of our lives (a boat ride through the channel, 100’s of elephants, getting charged by an angry hippo and watching a large family of giraffe as they watched us before fleeing single file into a field for a better view) and came back to pristine new lodgings. The original site had been lovely; thatched roofs over green canvas walls with plenty of wood logs. There’d been elephants munching away at branches just an arm’s reach from the dining room, but the new site, with regal white tents, polished wood and gleaming copper, is gorgeous and it won’t belong before the elephants move the 1.5 kilometers up the river for a little human companionship. 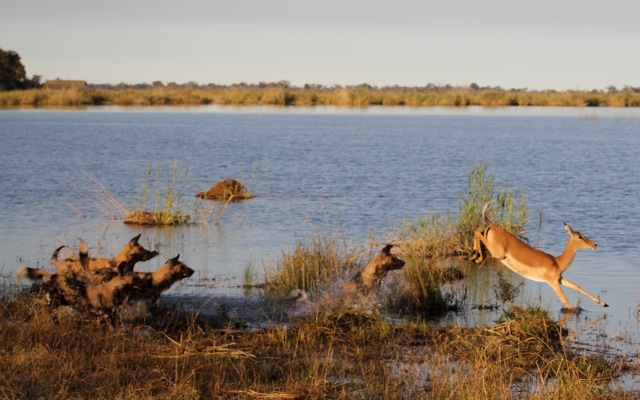 a rare to see Wild Dog hunt... even rarer to see the impala get away

After all the running water, it was time for the desert landscape of the Central Kalahari, where we were welcomed by Yaccoub (sp?) and his bushman friend Xaruge (pronounced Gar-U-Hah) at his family’s private lodge. 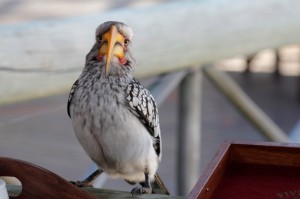 Deception Valley Lodge is about 70 kilometers from where Mark and Delia Owens set up camp before writing about their adoptive family of lions in the fantastic book, Cry of the Kalahari, another reason we were in Botswana, and it provides a unique opportunity to learn about life in Botswana for people like you or me. 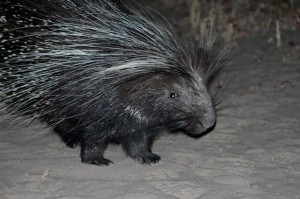 With a resident porcupine, and Zazu-like hornbill, it was enthralling to sit watching the water hole as giraffe, zebra and a whole range of antelope, including the largest in Africa, the terribly shy eland, came to drink. It was not unusual to come across Kalahari lions during our game drives and it was here, that at last,  Harrison’s prediction came true and I saw a leopard… 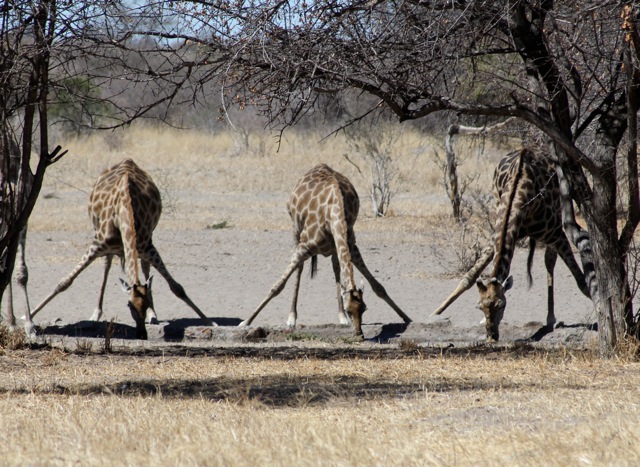 Finally, it was time for our inspiration… the salt pans. Owned by aventurier extraordinaire, Ralph Bousfield, San Camp is a particularly special place with a luxuriously simple design, that had us confusing R Bousfield with R Lauren. We were very fortunate that Ralph’s mother Nicky, whose family has been in Africa for over 100 years, was there for a part of our stay, regaling us with stories from her grandfather’s day, about tracking with the bushmen and the countless adventures she shared with her husband, Jack. 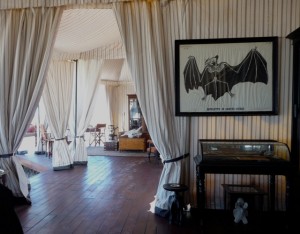 Neighbouring Jack’s Camp has Botswana’s third museum, with a rich open-air collection of skulls and body parts that spills over to San Camp. The Makgadikgadi salt pans are low on large wild life during the dry season; only a few elephant, spring hare, aardwolf, jackal and signs of lion were about. But we weren’t in town for the wild life. 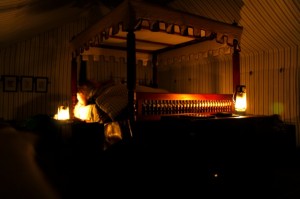 We were in town for a cultural exchange with the San (bushmen), a visit with meerkats, and a whole lot of nothing in pans, where it is so silent, you can hear the blood flowing through your veins. Oh, and the stars. There is nothing more gorgeous than the desert sky and spending a night out there was an absolute dream. I didn’t even feel it when Mr French pinched me. 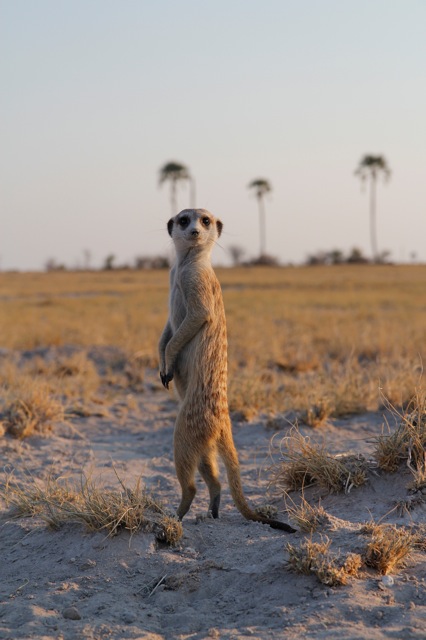