Okay, he didn't have great breathe, but he was still a great date!!!

Our first adventure is not left to chance. We’ll be having lunch with Jabu, Thembi and Morula, three orphaned elephants who have been adopted by Doug and Sandi Groves of Living with Elephants. 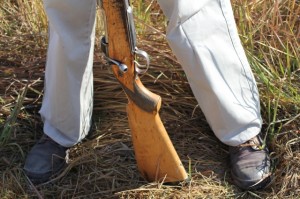 Along for the morning are a hand full of other tourists, two handlers and July, a guide with a gun. A gun that shoots live rounds.
“Funny,” comments Mr French, “they didn’t need live rounds when we were stalking rhino in Namibia, this is a tad disconcerting.”
“Just in case any wild animals come around.” He assures us. We were happy to learn that Doug and Sandi recommend nothing stronger than pepper spray. Elephants hate chili peppers. 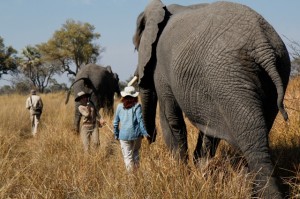 Nice girl, but she's got a slimey trunk!

Our hosts introduce their adoptive children. We walk with them and learn all about the majestic beast; they show us their teeth, lie down for us, spread their ears, steal our hats and give great hugs, we touch their skin, tickle their tummies, and weigh their trunks.

Doug and Sandi share their adventures, living with three very grown UP ‘children’ has given them a wealth of stories to tell. I am amazed to hear about the time Doug lost their son, Jabu. One day he left his nine year old son alone with his two sisters in front of the house, popping inside for 2 minutes to grab the young elephant’s medication. When he returned, Jabu was gone!!!

Can you imagine coming home, “ 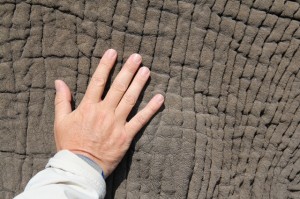 Hi honey, I’ve lost our elephant”??? They hired trackers, enlisted pilots, rented a helicopter. No one could find Jabu. One week turned to two, then three. Finally, five weeks later, when all hope was lost, someone came knocking at their tent. They had found Jabu, an amazing 50 meters from the camp. Sandi has tried asking Jabu what he was up to all that time. She suspects a little hanky-panky with a breeding herd, but he refuses to kiss and tell. In Doug’s defense, with all the trees and shrubs, you’d be surprised at how hard it can be to spot an elephant in the bush… that elephant who blocked our ride from the airstrip? He’d been just a few feet away before we spotted him. 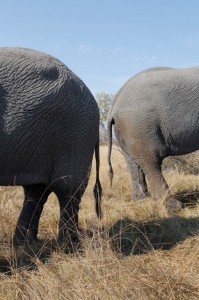 Over lunch we talk about the future of the African elephant. The Batswana (Not a typo. One person from Botswana is a Motswana, two people from Botswana are Batswana) guides we’ve met are very concerned about the current elephant population in their country. Elephants are not stupid animals, like humans they avoid gunfire, so they’ve taken to avoiding neighboring countries like Angola and Mozambique where civil warfare has led to many unintentionally dead elephants. Peaceful Botswana is a temptingly safe alternative, and since elephants don’t need passports 40% of Africa’s elephants now live in Botswana. Elephants destroy crops, but more disconcertingly, they destroy tress, shaking them for nuts, debarking their trunks or upending them to devour the roots. Deforestation is a serious concern in this arid, sandy environment which will quickly turn to desert without trees. 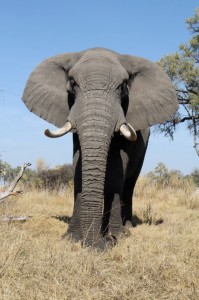 Today there are far too many elephants in far too small of an area with far too little resources. In an effort to control over-population, elephants have been donated to countries needing them, like Uganda and Tanzania and a lot of effort has been spent coaxing them back over the borders into the countries that are now fairly stable.

Birth control efforts have not yet been successful and culling just seems unthinkably heartless. Its a very difficult discussion and I particularly appreciated Doug and Sandi, candidly honest discussion on the subject.

After lunch our three hosts sing for us, giving a concert of traditional elephants calls, and an original sound invented by Jabu and then we each get a kiss. From an elephant! 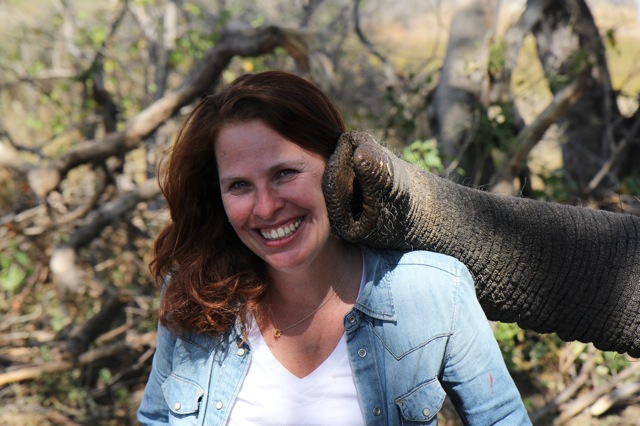