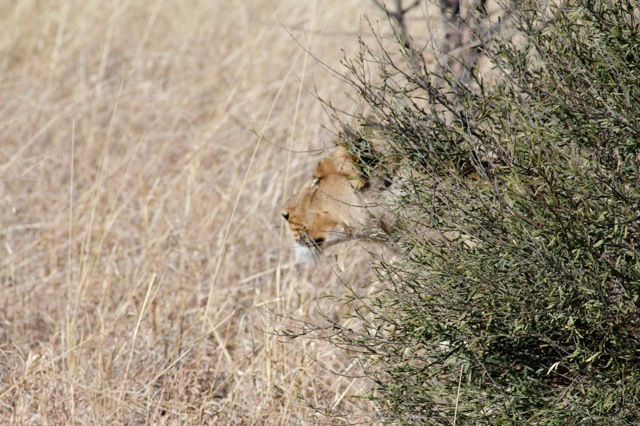 People who come to Paris regularly often refer to friends back home who are mystified by all the return visits, “What do you DO there?” they ask. I got a lot of the same about our return trips to Africa and I’ve never known how to reply. This time I took notes;

On an organized safari, your day follows the rhythm of the wildlife, starting at 5h30 with a wake-up call for your 6h breakfast, and perhaps the opportunity to watch a moonset. 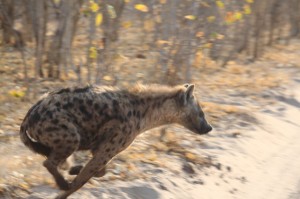 A quick bite, and it is time to head for the Land Cruisers, where (in winter) ponchos and hot water bottles make the single digit temperatures bearable as you head off into the wild. On a typical morning, you may spot a pack of wild dogs hunting impala, or a lone hyena trotting along his merry way. 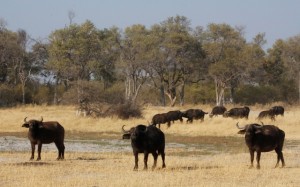 Then it is time for tea. Everyone down from the jeep for a stretch and biscuits are served with hot drinks, including Rooibos, aka bush tea. This is also the time for a “bush break”. If you are lucky, you will not find yourself like Mr French did, alone behind a thorny acacia bush, being stared down by a threatening herd of buffalo. At which point, your guide would firmly order something like, “Everyone back in the jeep. NOW!!!” 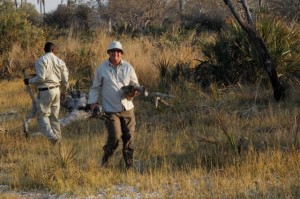 Then the radio cackles… “Copy, Bobby, copy, we’ve spotted a leopard by the waterhole.” And you are OFF with blinding speed to reach the leopard before it disappears into the veld. The jeep flies along, throwing you from side to side and you are filled with excitement with the thrill of the chase. Then it all comes to a screeching halt as the Land Cruiser gets stuck in a bog of mud. If you’re like 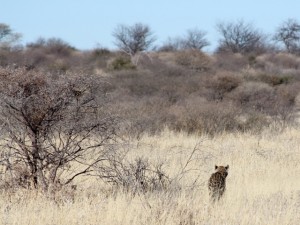 Mr French, you’ll hate sitting there helpless, and get down from the jeep to collect palm fronds and elephant dung with the guide, who is a pro and has you back on the road moments later. You’re not worried, you know you’re going to arrive in time because Harrison Ford promised you’d see a leopard and your guide is singing ‘Don’t stop believing’. And you do, but only just and the cat really does disappear like magic as his spots blend in with the scenery. 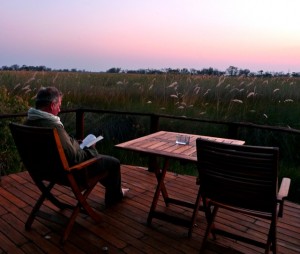 Then it is back to the lodge for lunch, followed by “siesta” time. You may be tempted to shower now, as the sun hasrisen and temps have gone from -2°C to 24°. At the lodge, there is plenty of wildlife to watch, books to read, or blog posts to write.

15h30, it has been at least 2 hours since your last meal and lodges encourage constant grazing, so it is tea time, again. 16h… everyone back in the jeep. There are rumours of a lion sighting. The guide points out her paw prints in the road. Animals love to walk along the dirt road created by the Land Cruisers and the guides love to follow their tracks, it is a symbiotic relationship. From her tracks, and her path, it is clear the lioness is on the prowl. She must be very hungry to be hunting alone. 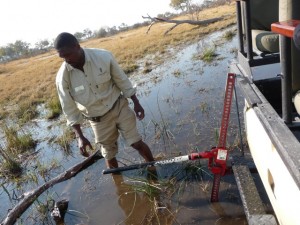 This is the Okavanga, where the cars come with snorkels and you may get stuck again, maybe this time in a lake, near a hungry lion. Even Mr French would not be allowed out of the jeep. And the guide will have to get out to jack up the vehicle by himself. It may occur to him that chauffeuring a bunch of tourists around the wild is a pain in the ass. Which gets him to thinking about this part of his anatomy, and wondering if someone is watching it, someone like a crocodile, so in the end, you do get to help out and use your binoculars to keep an eye out for crocodiles. 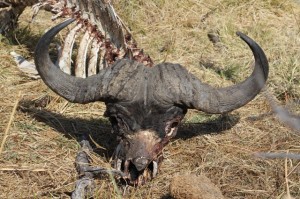 5 minutes to an hour later, you’re back on track looking for lions, but all you find are the left overs from their dinner. The sun is heavy on the horizon, which can only mean one thing; Sundowner, aka an apéro, as the sky turns a brilliant pink. 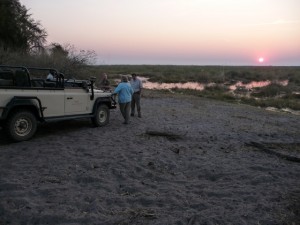 It gets dark quickly, so everyone clamours back into the Land Cruiser and you head for the lodge, using a hand held flood light to spot nocturnal animals, like ground squirrels, spring hare, African Wild Cats, and owls.

At the lodge there is often a roaring fire. They are concerned about you because it has been at least an hour since your last snack and they ply you with treats and cocktails.

Gin & Tonic (G&T for those in the know) is the traditional safari drink, which is not at all random. Tonic has quinine in it and quinine fights malaria. The earliest colonialists were completely unaware of the medicinal benefits of tonic, so only the serious alcoholics who were downing lots of tonic with their gin, thrived in malarial zones.

Dinner is served early by Paris standards and invariably based on a western diet. If you’re hoping for traditional cuisine, like beef stew with pumpkin or a roaring South African brai, this is not the place, although there maybe a slice of kudu or Okavanga bream and the food is excellent, regardless of the recipe.

The day began before the sun was up, so it is not long after dinner before you’re ready to head for bed. The lodges don’t like to have guests prowling around on their own after sundown so you have to ask for an escort, even Indiana Jones had to be escorted to his room by a local guide!

And there, you fall asleep dreamily under the African sky… 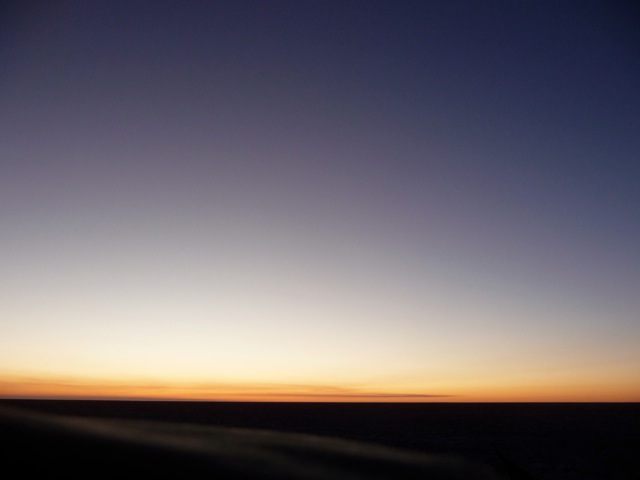 Air so pure, you can see the earth's shadow at sunset....

This time for Africa

3 thoughts on “This time for Africa”