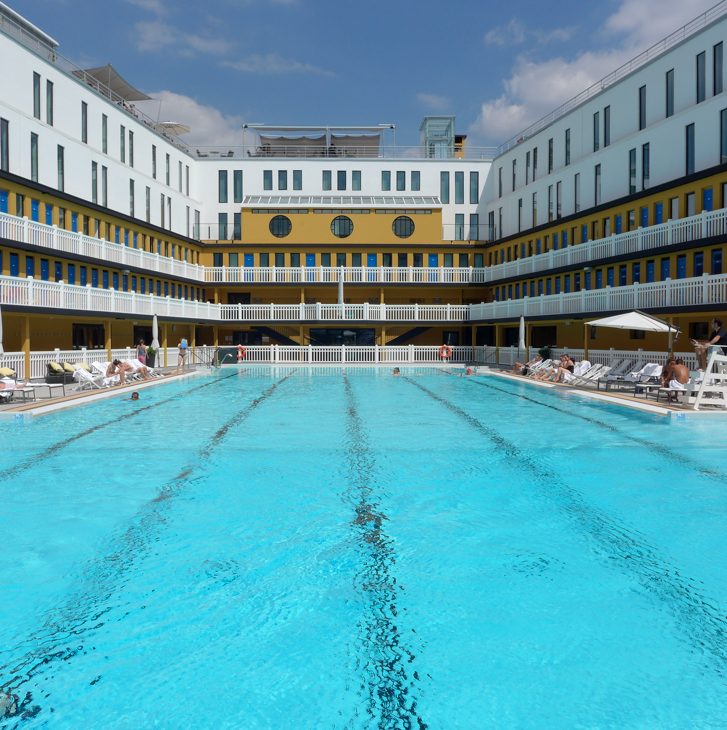 Yes, you’re right. The thermostat at the pharmacy is now reading 47°

Oh merde. Maybe I should stay here in Beijing…

I guess if you’re in Paris it’s worth coming home.

It was settled, Mr French would be coming home from his meetings in Beijing Saturday morning at 5am. And while I love Paris when she sizzles, Mr French was going to be exhausted and needing to exercise, which didn’t seem like a great plan with the mercury over 110° fahrenheit and rising.

We needed to escape somewhere close to home, yet worlds away; the Molitor immediately sprang to mind. 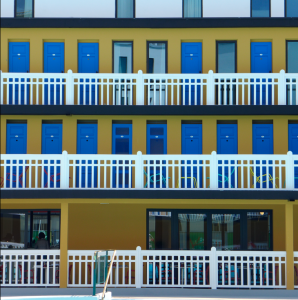 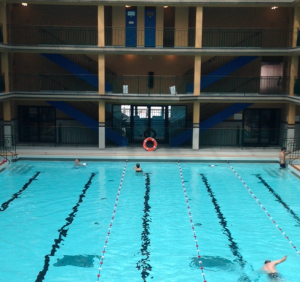 Built as a public swimming pool for the 16th arrondissement in the 1930’s, the Molitor could be the poster child for great design, where esthetics join function to form the perfect pair. In fact, it is not “a” swimming pool, but 2 pools, a 44 metre long outdoor pool, with a  33 metre long winter pool under a glass ceiling.

In the 40’s the bikini was introduced to the world in front of the bright blue changing room doors and by the 50’s it had become the ‘IN’ place to be. Sand was brought pool side as stars like Brigitte Bardot or Françoise Sagan would come by for a day next to the refreshing blue waters.

And then the place was abandoned, becoming the ideal canvas for a group of talented street artists, the home of underground rave parties and generally, a cool place to hang. A few years ago investors stepped in to renovate the site, promising to return the pools to their former glory.

The promise was kept and the space opened to much controversy just a few months ago. Yes, there is scandal, because the public pools are now part of a 5 star luxury hotel, with a roof top restaurant, Jean Nouvel designed Clarins spa and an unmistakeable whiff of attitude.

It now costs 180€ for a day at the pool, virtually killing the whole idea of the space being accessible to the public, although it will be free to public schools twice a week as soon as everyone is back in class. A room is “only” 230€ for the night, which is not cheap but considerably less than any other 5 star in Paris, or a last minute trip to Deauville.

I had thought the price of the rooms were so reasonable because the hotel is virtually in the Bois de Boulogne and fairly remote for your average tourist. Now that I have stayed there I think the relatively affordable price is because you’re getting a pretty average hotel, and I’d now love to know who they had to bribe for their 4th and 5th stars. I hate complaining when we’re away. We’re out to have a good time and complaining takes away from that, but I am not an idiot, I have a critical mind and I know when things are not as they should be. At the Molitor, I felt that we got what we paid for and I loved our weekend away, in fact, I suspect that we’ll be back. Maybe even next week. That said, the service was non-existent, and the quality of everything from the sheets to the furnishings, just a step up from IKEA. I could not shake the feeling that everything is set up to keep the hotel as cost effective as possible, the comfort of the guests a very small part of the equation. 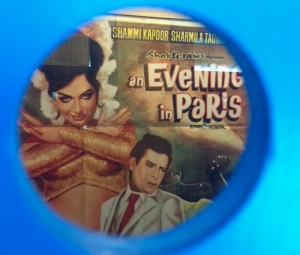 peeking through a changing room door…

All of that washed away as I dove into the delicious pool. The water was perfect and I got in 40 minutes of laps both days. The food at the restaurant is fresh, light and well prepared and they were even able to make a real iced tea for me. The changing rooms above the winter pool have been decorated by local celebrities, creating a voyeuristic art experience that was remarkably fun and I even tested the spa, which was luxurious (and way better designed than the rooms).

We read, we munched, we rested and Mr French came home Sunday afternoon ready to face a rather grueling week ahead.

6 thoughts on “The stay-cation”