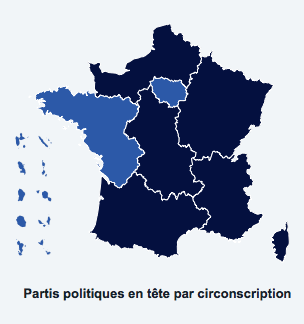 Appropriately, they used a dark color to show where the FN came out ahead.

That was the cover of Le Figaro Sunday night. France has just survived a political earthquake. The cover of the British Guardian paper was very similar in talking about the UK. On Saturday, three Jews were killed outside the Jewish Museum in Brussels. On Sunday two young Jews were beaten up in a suburb of Paris. But that is not what has everyone so upset. What is upsetting this week is racism and intolerance and a much bigger scale; the catastrophic results of Sunday’s EU elections, when several anti-EU parties gained seats to represent their countries in the European parliament.

The results have left much of the continent feeling the earth move under our feet. Not only are these parties against the EU, but they are against immigration in general, immigration from Africa and Asia in particular. With guerilla fighting going on around the airport in the Ukraine, there is an unsettling feeling of 1939 in the air.

In France, the results are a disaster; 57% of us didn’t even care enough to get out and vote against these intolerant racists.

My excuse? Everyone in my neighborhood was going to vote like I would, so my vote wouldn’t count anyway. Horrible logic, and now I regret it because the Front National, France’s racist, far-right wing political party has won the biggest part of European parliamentary seats in France. My vote would not have changed the results, but it may have sent out a clear message that the French care who represents them at the EU.

The truth is, many of us feel there is no one to vote for. The Socialist party that is currently running the government is an unequivocal disaster. They are consciously killing the economy to the point that very few French see things getting better for their children and there is a massive brain drain to countries where hope is encouraged. Or at the very least, not discouraged.

The UMP is the more right wing of the two major parties but they lack courage to make the changes that would be necessary for France to grow economically, or the foresight to foster tolerance in society. Even if they’d be an improvement, they are so deep in scandal over the misuse of funds that they shouldn’t be allowed anywhere near a federal budget.

There is a far-left political party, but communism didn’t work the first time around, and the French are not anxious to be the next guinea pigs. Which leaves the far-right Front National that is responsible for the recent seismic activity, winning more seats than any other party in France. The FN wants France to pull out of the EU and now they are representing us in its parliament. It boggles the mind. They are against immigration, would like a return to the franc and claim that the gas chambers in concentration camps didn’t necessarily exist. Their eleven mayors who were elected on the national level in April are doing really important things like outlawing hanging one’s laundry to dry out of one’s window, evicting human right’s associations and preventing the construction of a mosque. For the FN, France is a Catholic country, always has been, and really needs to be again. They are bad news and they are not alone.

UKIP, a similarly racist party excelled in the UK elections. It is a disaster with indifference among Europeans opening the door for intolerance. The crisis in the Ukraine, random violence against minorities and the current mood has some people very, very worried.