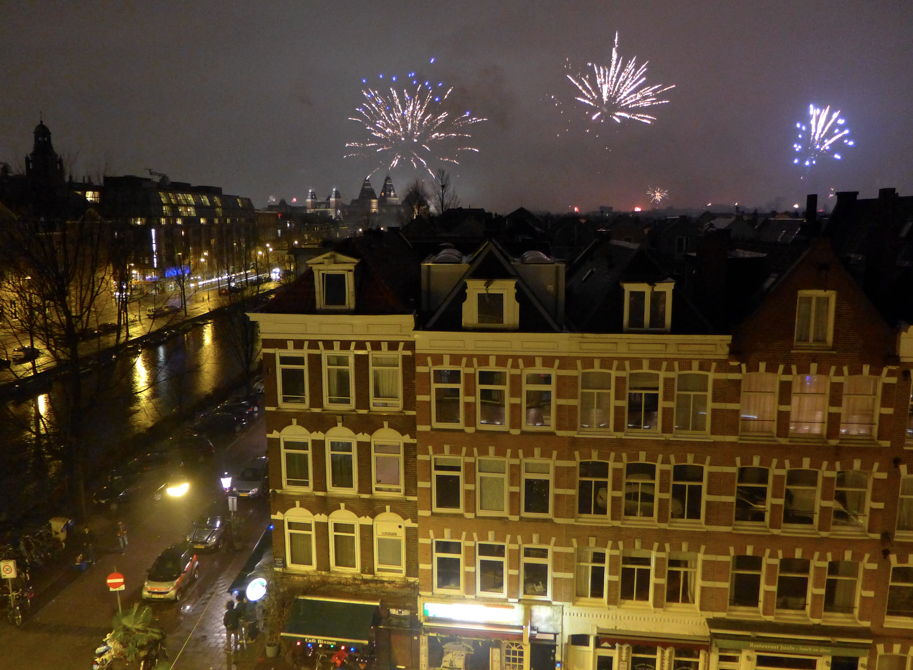 When we checked into our hotel, the bell boy showed the girls their room, announcing that they had the most requested room in the entire establishment. Not being a particularly generous person, I was having none of that and much to their dismay, insisted on a swap. It was a lovely room, but the real appeal was the 180° view of the rooftops of Amsterdam and the Rijksmusem. We unpacked, happy with our good fortune and headed out to explore the city.

Then, we did it. For the first time in our lives together, Mr French and I went out for NYE. We didn’t go out with high hopes expecting an extraordinary meal that would promise a better evening than usual. We have a lot of fun when we go out, anyway and we know the NYE’s drill; exorbitantly priced, very average meals, incredibly lousy service. 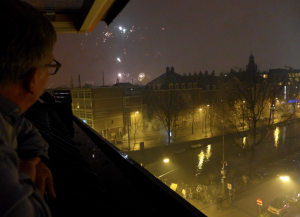 With that in mind, we were in an unfamiliar city, in a foreign country. We’d had several warnings that the Dutch go a bit wild with fireworks on the 31st.  And I mean several, as in every Dutch person we met, from our taxi driver to sales staff, to online advisors and waiters, told us to stay inside. So I did what I always do when I don’t know what to do. In a panic, I made reservations at the restaurant in our hotel. A Japanese fusion place that gets good reviews.

That morning, the fireworks began. Dutch taking advantage of the nation-wide 24 hour moratorium on randomly blowing things started lighting firecrackers randomly throughout the day, explosions like gun fire accompanying our adventures as Em and I jumped like giddy foals at each large “boom”. 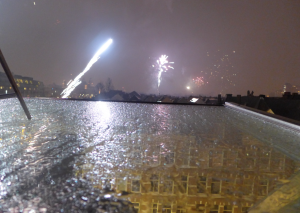 Before dinner, the girls headed back to Paris to celebrate with their friends (gotta love high speed train travel) and we went to the Double Tree Inn on the port. Being the international traveler that he is, Mr French was certain they’d have a roof top bar with a decent view of the pyrotechnics going on at 17h. He was right (kind of gives you an idea of why I love the guy).

The fireworks were amateur but beautiful, and fun, and for the first time in decades I didn’t get a sick feeling in my stomach thinking about all the money the government was burning up in smoke for 15 minutes of glory, instead of using it to feed someone. As we strolled back to our hotel for dinner, there were people shooting off fireworks at every square, bridge and (no longer) quiet canal. I jumped at every blast, sending Mr French into hysterical giggles. 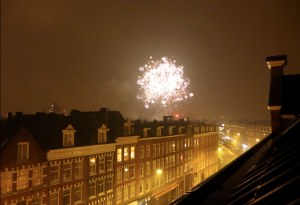 We dressed for dinner (I wore Le Smoking) and headed down to a surprisingly delightful dinner at Izakaya. While I am sure that the service was slower than usual, the rest was perfectly prepared and absolutely delicious. The bar was crowded with hip men of every age with high hopes of getting “lucky”  with their dates (also of every age), all of the ladies wearing tight black skirts with a serious dose of sequins. At midnight the dj (yup, Izakaya has a dj, and its not just for NYE) led the count down and there was lots of kissing. 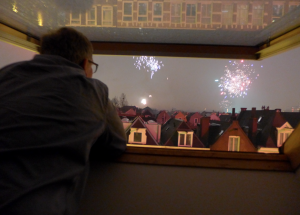 Suddenly an idea popped into my head, undoubtedly inspired about the fireworks popping outside. I grabbed Mr French by the hand and pushed him to elevator as he tried to figure out what bee had stung me. Rushing out the doors and into our room, we were greeted by a marvelous display of fireworks going off in every direction. Like the proverbial kids in the candy shop, we opend the windows and stood there, ignorant of the cold air and complete mesmerized by the red, blues, greens and golds exploding in every direction. We ran from window to window until we were too exhausted for anymore. Curling up under the think down comforter, we feel asleep dreaming of our 2014, which had gotten off to spectacular start.