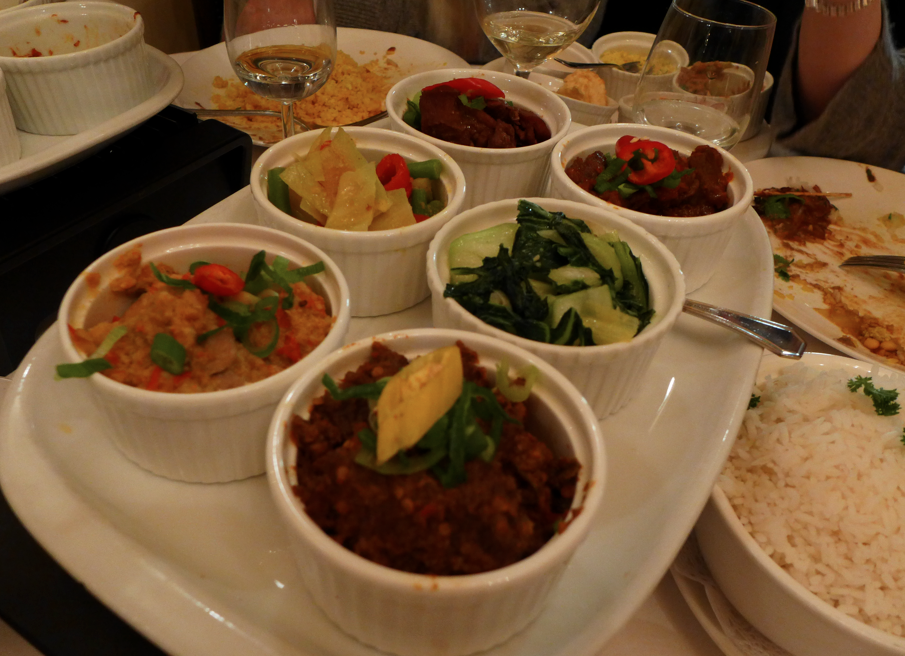 As much as we enjoyed our lunches in Amsterdam, dinners were the real treat. On our first night we had no plans. The girls nearly fell over from the shock of it. Being somewhat obsessed with food, I tend to make reservations when we travel. But, I had no idea where our wanderings were going to take us that first night, so I had left it up to kismet. The word kismet comes from the Turkish language and the first fantastic looking place we passed that night was from the Bosphorus. I had forgotten that Amsterdam is full of some excellent Turkish places, and started getting excited when Mr French reminded me we’d just had some pannekoeken, those traditional Dutch pancakes (if you want to try some, the best come from the Pannekoekenpavijoen de Carrosel). 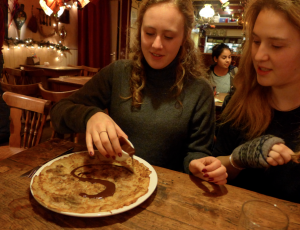 5 minutes later we were in front of Balti House Indian restaurant. E and Em wanted to go in. I wanted to go in. Mr French decided we’d had enough time to digest and a split second later, we were going in. The place was full of friendly chatter from neighbors enjoying piping hot dishes. Em nearly swooned from all the tempting aromas passing by our table as we waited for our meal. When it arrived, each dish was light and flavorful and the best Indian we’d had in ages.

The second night was my big night, my reason d’être for this trip. Decades ago friends from Montréal had given us this address and it was one of my all time favorite meals, ever. Now, I hadn’t been back in nearly a decade, and had a serious craving for the spicy, flavorful dishes at Indonesian Tempo Doeloe. I was so excited I emailed my friend from Montréal. “Watch out,” she replied back, “Anthony Bourdain featured it on his show.” Having been warned, I wasn’t entirely shocked to see that they had added a few extra tables since my last visit and the place was overcrowded. Almost, but not quite, uncomfortably so.

The place was quite literally packed, and it was a marvel to watch the staff negotiate their way through the narrow maze as they served guests, patiently explaining how the rice plate system works. Rice plates are the Indonesian equivalent of an Indian Thali platter, and very much like asian tapas. At Tempo Doeloe, a large bowl of white rice and a second bowl of yellow, coconut flavored yellow rice are served with collection of 6 ramekins on a hot plate. We chose the most elaborate rice plate, which came with 3 hot plates for the 3 of us who were sharing a meal. Each hot plate has different dishes, a mix of meats (including goat) and vegetables and the dishes get spicier and spicier as the hot plates arrive, until the final dish is too spicy even for me (I sprinkle thai bird chili peppers on my salads). I don’t remember that last ramekin being too hot to eat on our last visit. I don’t know if this is a new habit, trying to impress the likes of Anthony Bourdain. 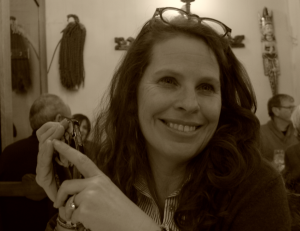 A very happy me…

Because the food is exotic, and spicy, the staff gives excellent advice as guests place their orders. Em was given her own rice plate, with less dishes and a lot less heat. When Mr French selected a Gewurztraminer to accompany our meal, our waitress warned him that it was an extremely sweet vintage and suggested a drier one that was on the menu. A French man taking wine suggestions from a woman. An Indonesian woman who lived in Holland, no less. It was a wonder to behold, and a good thing, because the wine was absolutely perfect with our meal.

Having traveled 4.5 hours just to get there, you’ll understand that despite the filling meal, I insisted on having dessert. I had memories of eating my first jack fruit at Tempo Doeloe. Just a simple fruit, sliced and served. And that is when I discovered the second change they’ve made in the last decade; the dessert. Normally, you mess with my dessert, and I get grumpy, but here, the changes were for the better. Fresh, tropical fruit sorbets were added to the plain fruit, for refreshing, cool end to a hot meal.

3 thoughts on “Amsterdam for dinner”