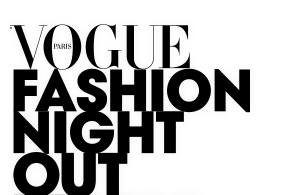 If fashion is a crime, I’ve got me a partner in the depraved practice and that would be my friend  Madame Ella Coquine. Ella and I have been hitting up fashion events together ever since we first met. Along with Paris, great food and the written word, it is one of our “things”. So last night we headed out together for Vogue’s Fashion Night Out. 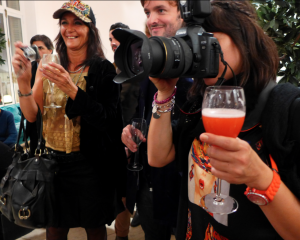 If you haven’t been following this for the past year and if you don’t live in a large city, you may not know that VFNO is an international event hosted by Vogue magazine, which sponsors open house parties in designer boutiques for fashionistas in cities like London, NYC, Tokyo and Paris. Last year the party was open to pretty much everyone, all you needed as an invite and you could walk through the door of pretty much any boutique. This year they were being somewhat more exclusive and you could often only come in if the store had invited you. Fortunately, we’d been invited to a couple of places.

Ella and I weren’t too torn up about the exclusivity. Our favorite destination on VFNO is Roger Vivier. I love that Inès will be in the house, Ella loves the live music. Inès, of course, being Inès de la Fressange, the queen of Parisienne chic and my inspiration for Inès sez… 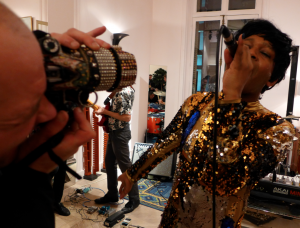 A little bling on the musician and the camera man!!!

This year we walked in the door with our author friend, Juliette Sobanet, her friend Kate and the Paris-based Brazilian actress Thaïs Sobreira . At the top of the stairs the two of froze. There, less than a metre away stood Inès talking quietly with Ella’s favorite local musician (so sorry, can not remember his name and she does not have a search function on her blog). The two of them, the two of us. Wow. Not that either of them know that either of us exists, but we were both quite pleased. Their conversation ended and something inexplicable came over me. I grabbed Ella’s hand and introduced her to her musician man, telling him that his promoter loves her blog and is constantly sending her free tickets to his concerts because he loves her reviews of their work. I didn’t think of the position this was putting her in, I just did it, grabbing her phone to sneak a few photos as they spoke. 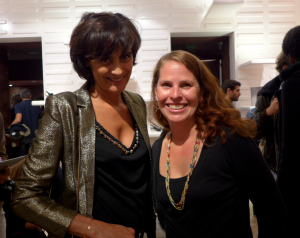 A few minutes later Ella got her revenge by getting Inès attention and asking for a photo. Ella got such great shots, it looks like Inès and I are old friends! We were even and I really could not have been more thrilled. I chatted with Inès, folks. She still doesn’t know who I am, but she is just as lovely as I had always imagined.

It was an exciting start to a fantastic evening that involved plenty of Ruinart, some great music, an astonishing amount of fashion eye candy and lots of giggles.

2 thoughts on “Throw away the key”