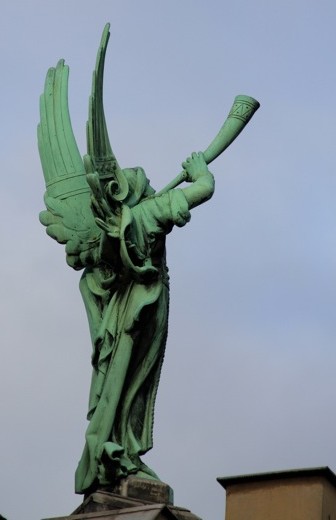 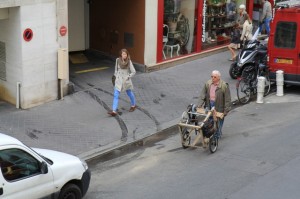 The Bug no longer notices our angels, but our view has captured her attention recently. Wednesday, April 4, she was at home studying for her mid-term exams when she heard a rather loud clanging bell. Peeking her head into my studio she asked what was going on. I followed the sound back to her window and looking out, I saw that it was the rémouleur. I had forgotten that this neighborhood had its very own knife sharpener. He passes by the first Wednesday of every month, ringing a large brass bell in his left hand to tell us that it is time to affûte our blades. 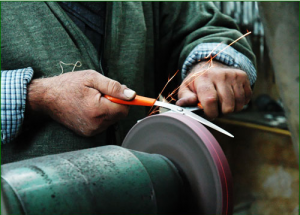 photo courtesy of the Rémouleur blog

The profession has existed since the middle ages and they still have a guild mentality, with a French blog of their very own, featuring images of rémouleurs, past and present, from across the globe. The French singer, André Claveau even wrote a whimsical song about these men and their work in 1952.

I thought this was incredibly charming when I first moved to France. Admittedly, it took me several first Wednesdays of the month and a keen sense of voyeurism before I understood what all the commotion was about. But once I go it, I was IN, running downstairs with a handful of kitchen knives at the first clang that signaled his arrival. We agreed upon a price, then he set down his cart, and started pedaling, putting the whetstone into motion. 15 minutes and 20 euros later he had basically destroyed my entire collection of high-tech cooking knives. It took several years with a proper rémouleur at the Sunday Richard Lenoir market to set things straight. Despite my disappointment, it still thrills me that this man passes by my street each month, as another man once did when my home was first built, and as men have done for the past 300 years.

One thought on “Rooms with a view”