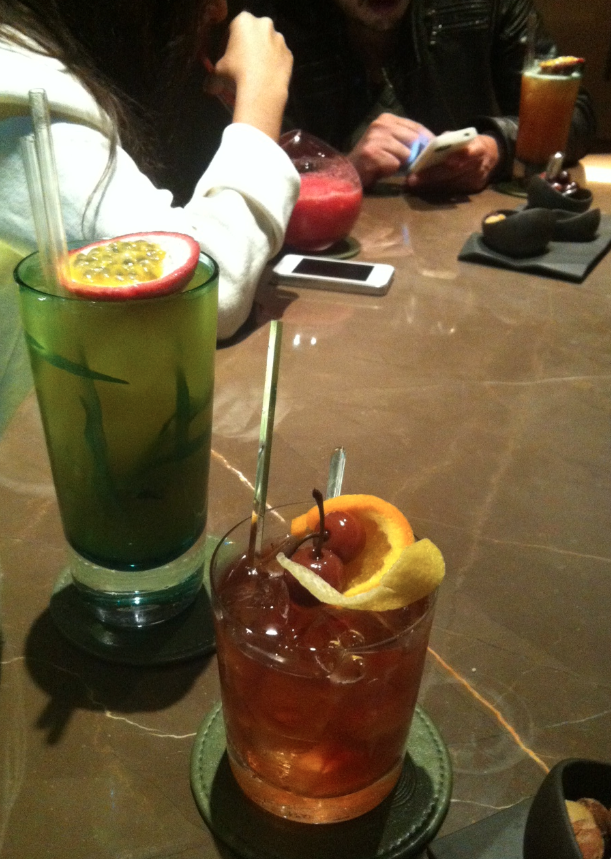 Last Saturday after an exhausting day spent shopping for a very special evening dress,    Mr French announced that he needed a drink. I am not sure if this is because he was parched, or because we’d just wasted an insane amount of time hunting down a wispy little handful of silk.

He’d actually been a bit more specific than needing a ‘drink’. The man wanted a cocktail, so I suggested the bar of a swanky hotel just up the street from where we were standing.

Mr French travels a lot for work, so he is quite hotel savvy and doesn’t even think twice before walking past the security standing in front of these places. I do. It intimidates the hell out of me. My heart used to skip a beat, worried they’d shoo me away, and that I’d be mortified. Neither of which should matter, but they both seem to.

The concierge pointed me to the bar and there was actually a maître d’ seating people. At a bar. I found that just slightly over the top. No one seated me at the Hemingway Bar of the Ritz. But we were in and I was happy to rest my shopping weary legs. It was a tough job, all that shopping, but I had enjoyed every minute of and was ready to savour some more adventure.

As we settled in, Mr French excused himself to the powder room and I started to look at the other guests. Next to us was a Mom with her 7 year old son. The bartenders and staff were so sweet to him that I immediately got over my surprise at seeing a young child at a bar. Then there was a couple our age. I was particularly taken with her stunning taupe Birkin bag and the fact that they were very much into each other, petting each other’s hands as she worriedly confirmed three or four times that there was no added sugar, or alcohol in her husband’s drink. I don’t think she was a nut, I think there was a health issue there.

Mr French arrived and asked what I was looking at, so I pointed at the next couple my eyes had moved to; two young, attractive girls laughing and giggling away in strongly accented English as they both played flirtatiously, running fingers through lustrous black hair. One of them had Celine’s Luggage bag in phantom black crocodile.

I was amazed and intrigued. Our drinks arrived, delightfully refreshing, and I started paying more attention to the scene. An Asian man arrived and sat himself down at a table, quietly text-ing away on his iPhone, or was her sext-ing? Then came a European guy, and the Maître d’ showed him a spot immediately next to the girls. Within minutes they were laughing and giggling, the three of them.

In walks a stunningly gorgeous girl in a mini white Chanel quilted skirt and some gorgeous black and white heels. She looks around the room until her eyes land on Asian gentleman who jumps up like a bolt, greeting her proprietarily, his hands on her hips.

“Oh my, god!” I exclaim, “a call girl, that is a call girl!”
“No doubt” affirms a blasé Mr French as one of the girls at the bar starts typing her number into the European’s phone. The man asks the bartender for the bill, indicating he’d be paying for the girl’s drinks, as well. He leaves and the girls toast their good fortune enthusiastically. I am confident that Mr French has made a mistake, pointing out that the has man left… alone. He tells me that the girl will be leaving shortly. And she does. Leaving her friend alone at the bar for 27 minutes. I’ve become the crazy stalker-type.

Mr French goes on to explain that the girl alone at the bar is just learning the trade (the cheap jewelry, is how you can tell) and that the girls pay the staff to let them in the bar. I should be alarmed that he knows so much about the business, but I’m not. He says its from all the detective novels he reads and I am happy to believe him and thrilled to have an inside peek at the fascinating show at the bar. I mean, really, we’re just making this all up in our heads. Perhaps the girl in the Chanel skirt was a long lost friend of the Asian gentleman from their Oxford days? Or the two girls were distant cousins and the one disappeared on an innocent errand? Circumstantial evidence, my friends, but its fun!

The girls decide to leave at about the same time we’re heading home and as they leave the girl puts her hand into that Celine bag, pulls out a bill and tips the Maître d’. Case closed.