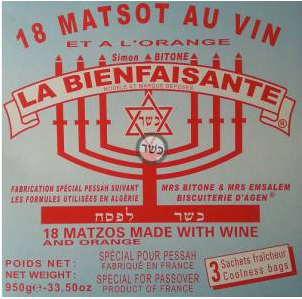 Passover, or as the French call it, Jewish Easter is ending. Woot. Woot.  This is the time of year when Jews do not eat bread. Living in Paris and passing by the bakeries which seem to pop up up every 10 metres, as well as avoiding the bread basket on every table, is something of a challenge. Actually, being Jewish in France has been, hmmm… interesting. It starts with a government thing, which, when you think about it, is the source of many interesting moments for those of us who live here.

Napoleon was a major organizer. Today they’d probably give him drugs to control something with initials like ADHA or OCD, but back then he was free to conqueror vast territories and create the Civil Code. He decided that it was time to let Jews live within the Paris city limits, and had them form a recognized administration putting them on par with the two other official religions of the country at the time, Catholicism and Protestantism. Thus was born the Consistoire, the official administrative branch of Jews in France.

When we came to France, 200 years later,I decided it was time for my daughter to get a little religion. I called a synagogue. The rabbi asked for proof from the Consistoire that I’m Jewish. This is not unique to France and as someone who has converted, it drives me crazy. Seriously? Proof? Should I show you the yellow star Hitler would have made me wear? He didn’t need proof, simple rumour was enough. Who in their right mind would claim to be Jewish just for the fun of it? I mean while the rest of the world is exchanging extravagant gifts and eating melt in your mouth chocolates over Christmas, we’re frying up potato cannon-fodder grease bombs and spinning lame plastic tops. We sing ridiculously silly songs instead of heart wrenchingly beautiful carols. And John Stewart has a laugh out loud routine about this time of year! http://www.thedailyshow.com/watch/mon-april-9-2012/faith-off—adapting-passover.  While my friends were busy taking horse back riding lessons or dance class I was mucking my way through Hebrew lessons. Spanish ham lovingly fed on acorns? Forbidden! Lobster? No way! Honestly, once all your friends have had their Bar/Bat Mitzvahs and the party circuit has reached its end, No One in their right mind is going to pretend to be Jewish.

In protest, I decided never mind, we weren’t going to do the whole Jewish thing after all. Their Dad, who had grown up without much religion, liked the idea. This sent my Mother in law, the woman who raised her son without teaching him a single prayer, into a conniption fit. Her husband had survived the Lodz ghetto, she had escaped the French collabos, there was no question that her granddaughters would not be officially registered with the Consistoire. She had a point and in honor of their family, I set out to get my daughters certified.

I gathered all the paper work requested by the Consistoire. Then I added more,knowing I was dealing with French bureaucracy. Appointment time arrived and I was called into a very plain office, with a wooden desk and a Rabbi. I handed over my Jewish marriage contract, as well as the burial certificate for my Mom, from a Jewish cemetery. The Rabbi looked at me dubiously, “Your Mom’s name doesn’t sound very Jewish. It sounds suspiciously Italian… are you sure she was born Jewish?”

“Absolutely” I declared confidently, brandishing the death certificate and not at all hesitating in my pure, bold faced lie.

I had my electric bill and 3 different versions of each girls birth certificates, but I had not come prepared for this question. In Judaism, you are what the mother is, the father is irrelevant. I gave the Dad’s background, which included his family’s listing in the Jewish Who’s Who but without written proof, it was just air and he was not impressed. I was not coming back to do this dance again, so we were at something of an impasse. After much negotiating with Hebrew terms being thrown about in French, the rabbi took out the certificates, claiming the girls, “Jewish by mother, father’s religion unknown” and I was done.

It turns out that I was more done than I had ever imagined and it was not long before I was planning Easter Brunches for my step-children. Em still loves Passover, so yesterday I went to the Bon Marche and got her one of her favorite holiday treats that we discovered after moving to Paris, unleavened bread with orange flavor. I had some for breakfast this morning and loved the mix of orange and zest. Bitter sweet.