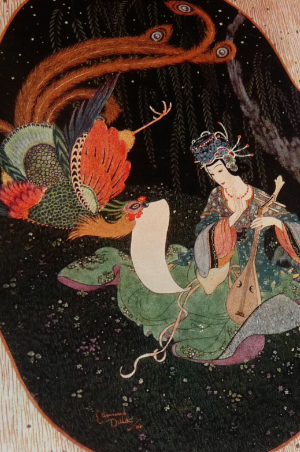 An exotic name that evokes love and romance. Somehow I made it through childhood, beyond my teens and into adulthood without ever having read the story of the Princess Scheherazade and the Tales of the 1001 Nights. I knew about Ali Baba and the 40 Thieves, Aladdin and Sinbad the Sailor, but mostly through Disney and Hanna-Barbera, I did not know about the beautiful virgin married off to an evil despot who believe all women were philandering whores. A belief that inspired him to take a bride every morning and have her assassinated before the next sunrise. The vizer’s daughter was horrified to see all these innocent young women loose their lives, and decided to do something about it. She convinced her father to let her be the next bride. He wasn’t thrilled with the idea, but he’s not the first man to find himself firmly wrapped around his daughter’s little finger. And, she assured him, she had a plan. 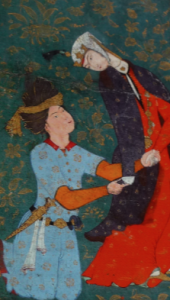 That night in bed, alone with her king Scheherazade began to spin a tale. A wonderful, enchanting story that had the King completely enthralled. He had to know how it ended, but she fell conveniently asleep before revealing who done it. If the king wanted to know what happened next, he had to spare her life, and he did. This went on for 1001 Nights.

L’Institut du Monde Arabe celebrates Scheherzade with the exhibition LES MILLE ET UNE NUITS that will run until April 28th. Entering the show, I was swept away by the modern version of a flying carpet that hovers about the first room, showing the various editions of the book, from the earliest known example in Arabic (on loan from the University of Chicago, thank you dear daughter) to the decidedly more modern 19th century French translations.

Winding through the exhibition there is a sound area dedicated to the recital of some of the tales, read by French actress and singer Sapho. I slipped on the headphones and was swept away by the seductive poetry of her voice, although the tales themselves are sometimes sad and sometimes violent. 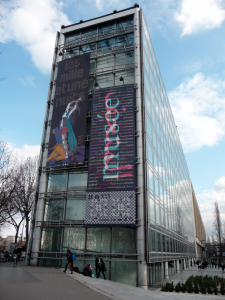 There are more rooms. Some featuring the art from the region, other focusing on the story’s history in film. There are jewelery and costumes, and weapons of war; a totally bizarre foil-wrapped room featuring genies and djinn, as well as some truly exquisite objets d’art. There was a set of Chinese haircombs made of metal and kingfisher feathers that were stunning. Throughout the show, the colors are rich, the materials sumptuous and the subject enthralling, everything you’d expect from a centuries old tale that translates into nearly every culture across the globe.