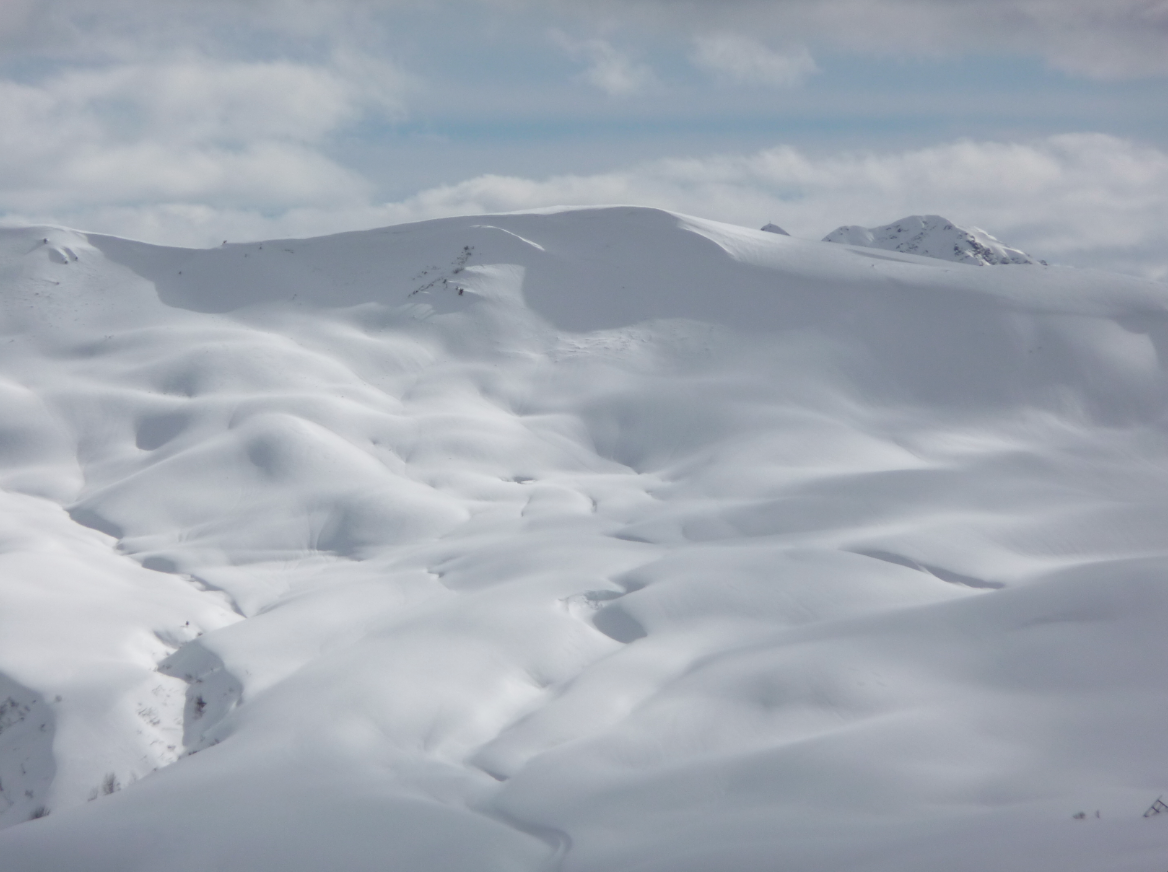 To a girl from California it sounds so exotic and intriguingly “In Her Majesty’s Secret Service”, but to the French skiing the French Alps, is kind of like Chinese food in China; just skiing. And there are a few things they take for granted that those from abroad should know.

First of all, you have to consider the where. Mr French is convinced that the 3 Vallées is the best skiing area in France, because it includes Val Thorens, the highest ski station in the country which means great snow. Others love the über chic towns of Courcheval and Méribel, which attract the James Bond crowd; European jetsetters, Arab sheiks and Russian oligarchs.

To give an idea of how close one village is to the next; several chairlifts in the town of Menuires will take you to the top of mountains with slopes that lead you down to Val Thorens or Méribel. The entire excursion, including the lift lines, the ride up and the trip down, including the time for the serious spill you may possibly take, even if your skis are in snow plow, takes less 40 minutes.

Then you need to consider the when. The Minister of Education has divided the country into three zones, each zone getting two weeks of holiday one week from another, so that anywhere from 1/3  – 2/3 of the country may be on ski holidays at once, which means the holiday period lasts an entire month. To find out the exact dates for all of the holidays visit the Minister’s site.

Another important detail is that the majority of holiday rentals and reservations in France run from Saturday to Saturday. Wanting to arrive on a Monday can pose something of a challenge when looking for lodgings.

Which is how we discovered the Chalet Hotel Kaya in Menuires. It was over the Christmas holidays and we wanted a short break without missing New Years in Paris. A quick Google searched turned up Le Kaya. A very chic, design hotel perched discreetly at the top of the village, directly on the slopes with a restaurant, a bar, a pool, a spa and a scrumptious tea time.

Which is another point about French holidays, the who will be hosting you. Hotels like the Kaya offer what is called “demi-pension”, is a meal plan that includes breakfast, dinner, and in the case of Le Kaya, that delicious tea that is served like a dangling carrot, keeping you going down those last runs as the chair lifts close and ski schools end. Demi pension is great if you’re traveling with your family, particularly kids, and do not want to have to think about who is eating where each meal. It gives you the freedom to have lunch on the slopes (or at the beach, or exploring whatever region you may be visiting).

But for a girl who likes to explore her surroundings, it can feel somewhat restrictive, so when its just us gr’ups we opt out and treat ourselves to a gourmet dinner at the hotel’s excellent restaurant, Le K for a night or two during our stay.
How to get around is somewhat limited. We’ve driven once, but because everyone leaves and arrives on a Saturday, the traffic jams can be horrendous. Then there is the minor detail of being in Alps with the intent to ski, which can mean severe weather and nasty road conditions. We now take the TGV to Moutiers. From there we can either take a bus up to Menuires, or hire a cab. Either way, its best to reserve in advance and for the bus they require that it be done at least 7 days prior to travel. 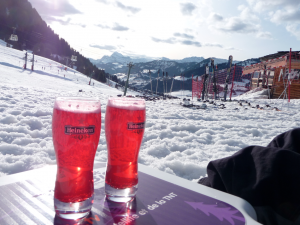 L'Après Ski is key, and a bit ironic as we drink Monocos!

As you get off the ski lift on runs like Mont de la Chambre you’ll have a spectacular view of Mont Blanc. You’ll also notice a lot of folks wearing red ski suits with the letters ESF on the back. That’s the Ecole de Ski de France and the red clad sportsmen (and women) are ski instructors. France is very organized when it comes to sports. Kids are rarely thrown on to the slopes and expected to ski. They are put into ski school where they earn their “Flakes” (this is true for swimming, horse back riding, surfing and tennis, among others, having an official rating is really important in France), or Flocon. These classes continue until the kids are ready to compete professionally, not because the parents think Jr is destined for the Olympics, but because ski school is built in baby sitting, giving Mom and Dad time to themselves on the slopes (or in the spa).

This week, we’d wake early and enjoy the buffet breakfast at Le Kaya before sending the girls off to ski school, starting our days with whole grain breads, fresh juices, yogurts and spice marinated fruits before hitting the slopes. After a couple of hours, we’d be hungry again, and start looking out for one of the many restaurants on the slopes that offer outstanding food, particularly those serving local specialties like raclette, fondue or tartiflette (more on these later in the week). In Val Thorens there is the Michelin starred Loxalys and this past week we stopped twice at La Ferme Riberty, enjoying the lively crowd, as well as their tartiflette, an omelette that was generously studded with girolle mushrooms and house made berry pie from their wooden deck.

After lunch there would be more skiing this time with my ski instructor, then eventually that lovely tea time I keep mentioning, followed by a few laps in the pool and a well earned hammam before it was time to eat, yet again. The chef at Le K provides a light, healthy cuisine, with lots of regional ingredients and plenty of heirloom vegetables. Every meal was a treat, which we’d savour before sinking into the comfy couches in front of the fireplace at the bar.

WHY??? Don’t ask me!!! Skiing is an insane sport and I really have no idea why anyone goes to all the trouble, except, well it is drop dead gorgeous up there and 7 days of skiing has sent my metabolism into over-drive, allowing me to eat anything and everything that comes across my path, virtually guilt-free!!!!