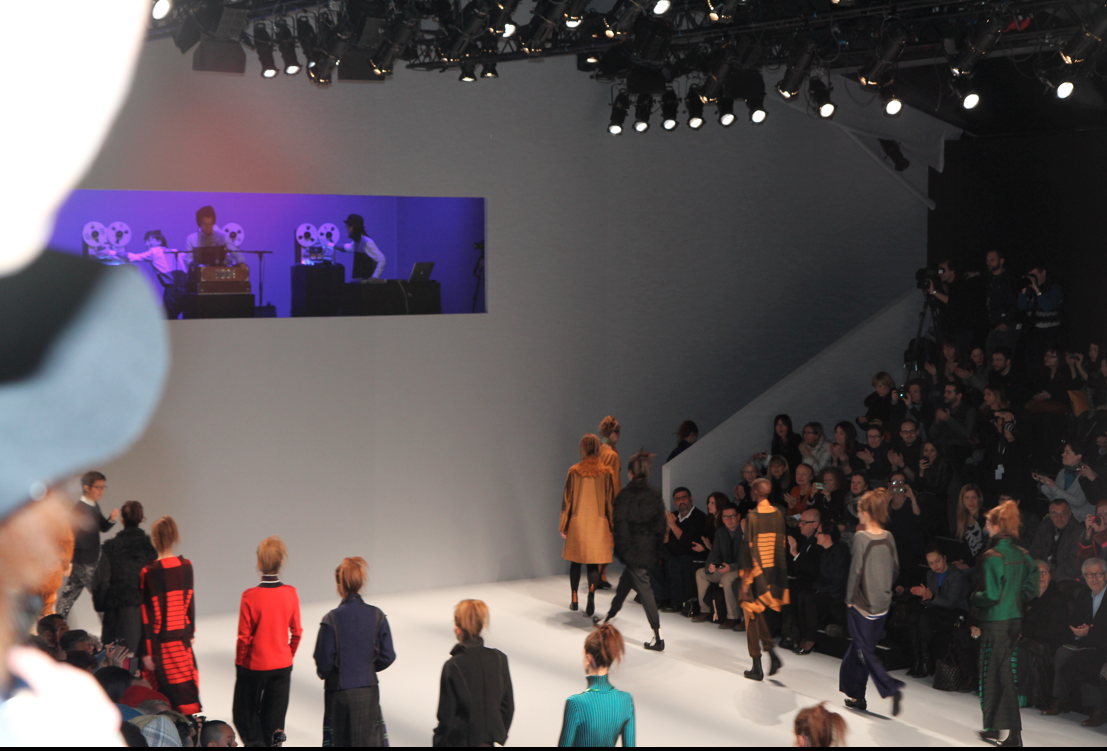 And yes, its my favorite season, once again, Paris Fashion Week. It also happens to be winter break for the Paris school district, so I have had to tear myself away from the cocktails, street fashion and buzz of creative energy, tuned so high the sun is threatening to shine and drag the teen to the Alps. But not before I got in one show, and what a show. 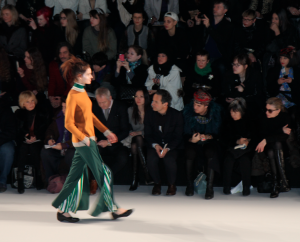 On Thursday I received my invitation to the Issey Miyaki show, squealing with delight as I opened the envelope and terrifying my neighbor, who was also in our lobby at his mail box. That’s how it works for fashion week your Friday invitation arrives Thursday am, and you drop everything, changing your plans for the privilege of attending a show.

It was freezing outside, but I donned my bowler hat and headed out the door a bit early to catch the street fashion scene around the tent. Outside, it was bright grey skies, with the imposing white tent. Inside we plunged into a pitch black cavern.

The backdrop was white, cut with a long rectangle of electric blue light. Like fish in a tropical aquarium a team of DJs began spinning and dancing, a tsunami of energy flooded the room as the first model sauntered on out. Smiling. You rarely see models smiling during fashion week. I’d assumed that it was some unwritten code, like being quiet in museums. 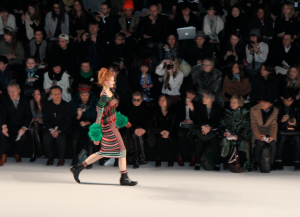 sees things otherwise and the models looked so happy to be wearing the fashions of this young, dynamic man that it seemed wearing his fashions would make me happy, too. It didn’t hurt that he showed a naïvely refreshing palette, like a kid gone wild with his classic 1958 Crayola coloring crayons; Prussian Blue, Spring Green, Orange Red and Salmon pink.

The cuts were just as generous, with large jackets, mammoth-bell bottom pants (the term is my way of saying, considerably wider than elephant bells) that fanned seductively and wide shift dresses.  The skirts were young and fun, while being long enough to cover my knobbly knees, for fashion so attractive I felt younger just watching the show. 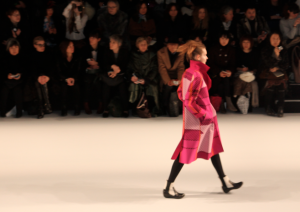 Usually, after a show, the fashion journalists and buyers keep their faces as straight the models on the catwalk, trying to digest what they’d seen and draw a conclusion for themselves, But last Friday the crowd was a buzz with energy, talking about how much they’d loved the show and the explosive energy of what they’d seen. Monsieur Miyake knows that smiles really are contagious.