Actually, its London Calling, but that was just obvious, I couldn’t, simply could not do that to you. Last Friday Mr French and I headed to Londontown, which explains why there was no Friday@Flore. It was Friday@LaGare for me. The freezing cold gare, that I was very happy to leave as we stepped into the train.

Taking the Eurostar usually makes me feel like Alice in Wonderland, as I fall into the iconic, diesel infused Paris metro, and resurface to bustling streets with black cabs, red buses and traffic going the WRONG way. Yes, all my British friends, if you have to post signage at every single street corner in your city, telling pedestrians which way to look before crossing, well, its safe to say, your way is slightly twisted.

This trip was even more surreal, as we stayed in the station, taking the glass elevator directly to the lobby of the monumental St Pancras Renaissance Hotel. A Victorian fantasy, this hotel is a gothic jewel, with stunning public spaces and exceptional service, unfortunately the rooms are your standard international business travel fare and I did not fall in love with the neighborhood, although, to be perfectly fair, I didn’t give it much of a chance as we checked-in and immediately hopped a cab for the familiar (to me) Mayfair district. 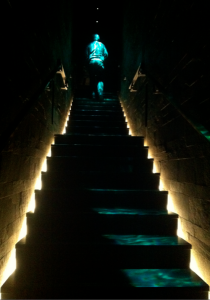 It was 21h and we had reservations at Chinese restaurant Hakkasan, which I had found rather by accident. I had really wanted to go to the Indian restaurant, Amaya, my favorite restaurant in London, and one of my all time top ten on planet earth, but Mr French had pleaded for something different, and I complied, because really, it is bizarre that a chick who dedicates her life to exploring the planet is obsessed with returning to the same addresses time after time!

Before getting in the cab, though, we had a problem. The lock on Mr French’s suitcase, the one that is integrated into the luggage, had jammed. We’d had to call security and get a rather large, knowledgeable gentleman to break it open for us. Over the weekend we also had problems accessing the gym and I left a rather large package behind. The hotel staff know us rather better than they should and really earned their tips! While helping me postpone our reservations (because of the locked lock) the concierge assured me I’d made the right choice in trying Hakkasan, it was the best Chinese in the city. 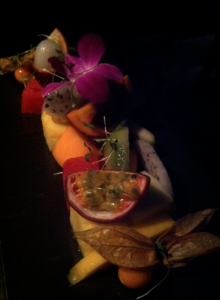 I had wanted a restaurant that served very spicy cuisine, like I can not get in Paris, and attracted the super cool London crowd. You know, the places with dramatic lighting and intriguing spaces that you see in movies with stars like Hugh Grant and Rene Zellweger. Hakkasan fit the bill. The food was spicy and elegant, and perfectly prepared. So well prepared, in fact, that they’ve earned a Michelin star. We had dishes with lily bulbs and morning glory greens, and whole chilis and all kinds of favorites I can not get at home. The pièce de resistance was the beautifully presented dessert of a dozen different exotic fresh fruits which satisfied my relentless sweet tooth without giving my any guilt.

The crowd was worth watching, too. Young folk covered in studs, men who were better coiffed than I have ever managed, girls with heels so high they teetered and had to grab the railing for support, co-workers getting smashingly drunk over an extravagant TGIF and nervous mid-life couples out on a first date. It was dinner and a show!

4 thoughts on “Rock the Casbah”