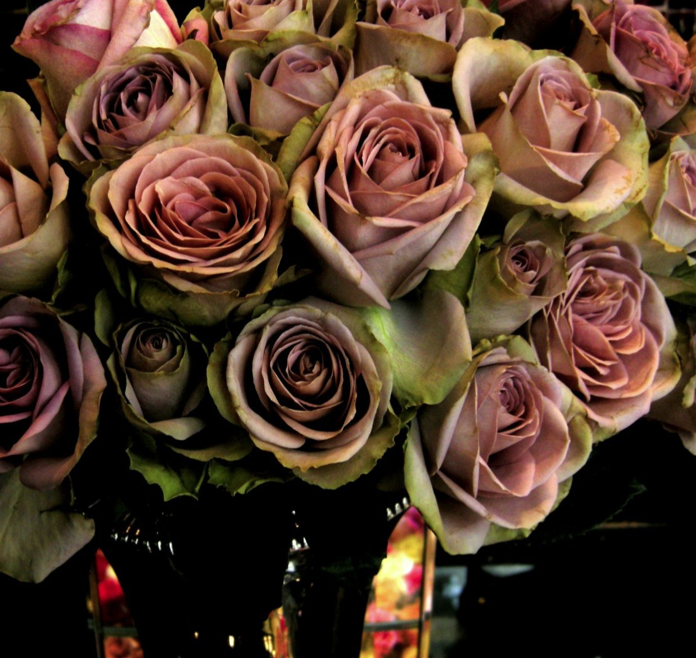 Last week I mentioned a luxurious soirée over cocktails at the Hotel Costes. A sometimes reader asked if I’d be writing about my evening and I replied that sadly, no, I didn’t have any photos. This happens often. I get so caught up in the moment I don’t think of whipping out my camera and clicking away. She said this wouldn’t be a problem, so I’ve borrowed the photos from the official site and dedicate this to my reader.

I was meeting la Fashionista, aka my step daughter, Mlle French for cocktails. Tall, full figured, with crystalline blue eyes and porcelain skin that is perfectly framed by her nearly black hair, Mlle is a trend setter. Last year when she had a back problem and had to wear one of those wide, medical support belts, she decided to wrap it outside her clothing like an accessory. The next Monday three coworkers were wearing the same belt, lauding its practicality (great for stashing your Marlboros) and the flattering silhouette it created!  Nothing but a trendy, fashion forward address would do. I suggested we meet at the Hotel Costes. She was thrilled.

I don’t exactly look like an international jet setter, but I walked up the stairs full of confidence, trying to look like I owned the place as I stepped into the entirely black entry. The greeter bowed his head and welcomed me with a bonjour that was as warm as the very practical Uniqlo Heat Tech jeans I was wearing.

A size 0, barely clad hostess with long, flowing hair, was busy on the phone, but a host quickly came to my aid asking if I’d like to sit in the half-full, very boudoir looking bar that was plush with red velvet settees, heavy chandeliers and copies of old world portraits or in the red lit, covered courtyard. The bar felt rather hushed and romantic, opulent bouquets of roses everywhere, so I opted for the more spartan, livelier terrace and settled myself at a marble topped bistrot table.

Mlle arrived and was thrilled with the Christmas feel of the space. We set to talking as I nursed a mojito and she savoured a Ladoucette Pouilly Fumé. We occasionally stopped to watch the crowd, but mostly we were chatting, and so wrapped up in our conversation that we were surprised when waiter came over to announce that it was dinner time. They were fully booked for the night, he explained, but they had one table left if we’d like to stay and have a meal.

We shrugged. Her beaux was playing sports, Mr French was in China and M had already stepped out with her BFFs for the evening. Inertia took hold and we decided to stay, both secretly suspecting the now empty restaurant was not really fully booked.

We were moved to a cozy nook overlooking the terrace, and instantly felt like two princesses presiding over a grand party, an entire row of (empty) tables stretching out at our feet. The waiter handed us our menus and we turned to see that a line had formed, flowing out the door onto the cold street. Richly clad folk were waiting patiently to announce their reservations and be seated for the evening. We were astounded as the tables at our feet were filled in a matter of minutes.

I ordered the Tom Yum sea bass, while Mlle opted for the grilled eggplant with burrata. Costes is the kind of place where they serve the thin and beautiful; without asking I was warned that my meal was served with rice, but they’d be happy to substitute spinach instead, while Mlle was informed that her dish, a starter, really was large enough to serve as a meal.

Sitting near the entryway gave us lots and lots of people watching opportunities. Sometimes we had a hard time keeping a straight face, like when a rather petite lady whooshed in totally engulfed in her camel colored, hooded cape, trimmed in white fur. Or the 60 something British-looking gentleman with a yellow silk scarf and a 20 something plaything on his arm. There were some interesting looking boob jobs, and only one botched plastic surgery. There were the terribly attractive, carefully disheveled Frenchmen and the gorgeous Moms with their equally gorgeous teens, young couples too busy gazing into each others’ eyes to notice the rest of the world and older couples exchanging holiday/birthday/I love you gifts in the boudoir.

We loved our regal seats, but joked about getting the table near the entry where no one else would want to sit. The next day, Mr French, crumpled with jet lag and smelling of  canned air looked at me in amazement. “Are you kidding? That’s where they put the beautiful people: assures everyone else that they’re with the right crowd and attracts men.” Wow. Mr French deserves something special for that one! Love must be is blind…