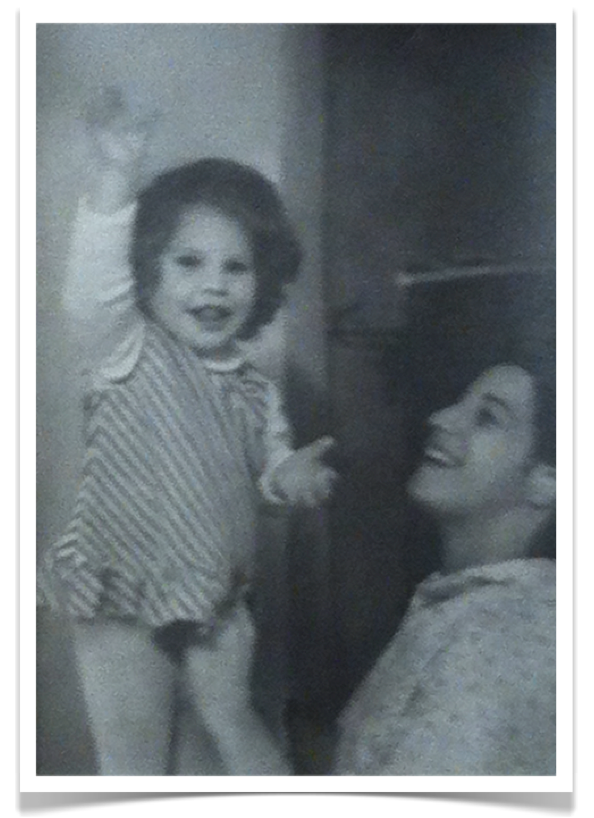 When I was seven years old my rather devout, convent school raised, Roman Catholic mom decided to become Jewish. Her husband, my father, was Jewish and she somehow got it into her head that my brother and I needed religion. My Dad was not going to start attending church, so she signed up at the local synagogue and before any of us, not my Dad, not even the Rabbi, knew what had hit us she was organizing a conversion ceremony. I still remember that day, driving up to The City with a RABBI in our car, dressed to the nines, a gazillion bobby pins in my hair, ready to go to the Mikvah (a ritual bath).

Because we were already born, and to a shiksa no less, my brother and I had to go into the bath, too. There is not a single photo of this day, but I can tell you that I was wearing a polyester a-line pale pink, yellow, and orange dress that had a square neckline and white knee highs with patent leather mary janes (my fashion habit started at an early age). I had to take it all off, and then we had to remove every one of those bobby pins from my rather long, unruly hair before heading into the bath. I remember my mom being annoyed with herself for not having understood that when they said we’d have to be as naked as the day we were born, that included our hair. I was just relieved they p hadn’t insisted we shave it off.

Immediately after that, pork was banned from our house, those lovely crab dinners were out and a new tradition began; Friday night dinner. Every Friday night we had to be home for dinner. My mother would light the candles, we would sip some really horrible sickly sweet wine and we’d all say a prayer over the bread. Then my Dad would bless us. There is a special prayer in Judaism, asking that your children grow up to be healthy, good people. If you’ve ever seen Fiddler on the Roof, you’ve heard the prayer, you just didn’t know it was a prayer because they snuck it in there as if it was a Broadway melody. Finally, my Dad would recite a poem for my Mom, a hymn really, written by a king (Solomon) and fit for a queen.

Those dinners stopped a few weeks before my brother’s Bar Mitzvah and my 16th birthday, when my mother died. She was 39 years old.

A WOMAN OF VALOUR who can find? Her price is far above rubies.
The heart of her husband doth safely trust in her, and he hath no lack of gain.
She doeth him good and not evil all the days of her life.
She giveth food to her household, and a portion to her maidens.
She stretcheth out her hand to the poor; yea she reacheth forth her hands to the needy.
Strength and dignity are her clothing and she laugheth at the time to come.
She open her mouth with wisdom and the law of kindness is on her tongue.
She looketh well to the ways of her household, and eateth not the bread of idleness.
Her children rise up and call her blessed. Her husband also, and he praiseth her;
“Many daughters have done valiantly, but thou excellest them all.”
Grace is deceitful, and beauty is vain,
But a woman that feareth the Lord, she shall be praised.
Give her of the fruit of her hands and let her works praise her in the gates.

10 thoughts on “A Woman of Valour”