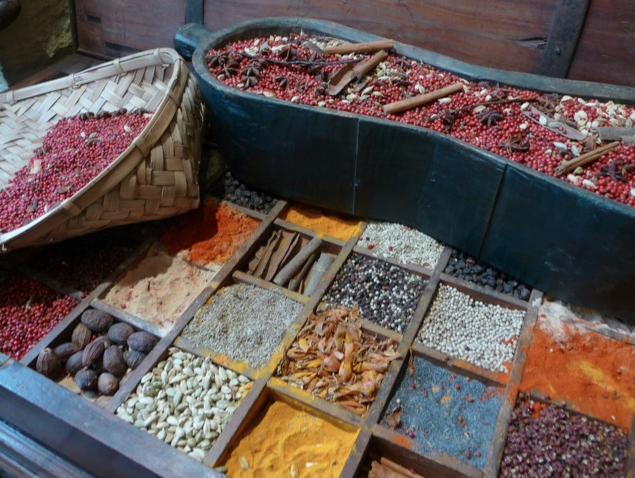 Our stay in Cancale was an absolute dream, with unexpected great weather and absolute calm. The weather, of course, was pure luck, but the peace and tranquility was thanks to  Les Maisons de Bricourt. We stayed at their Cottage Les Rimains, which is delightfully far from the maddening crowd, over looking the bay. Each of the four rooms has paned windows which frame a spectacular view of the bay, reminding us that nature is the ultimate masterpiece. 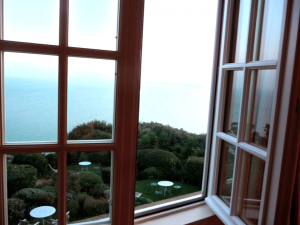 I was a bit surprised that no one offered to take our bags upstairs. This is a Relais et Châteaux, after all, but it was the only hitch of our entire stay and not being a whimp, it was not a big deal, but being a reporter, I feel the need to mention it in case it would bother others. After getting over the spectacular view, we saw that there were treats waiting for us; home baked biscuits, fresh apples, exotic dried fruits and Chouchen, a local honey-based liqueur.

Every morning we’d rise and head through the garden, beyond the white picket gate to begin our run on the GR34, water lapping the foot of the cliff. 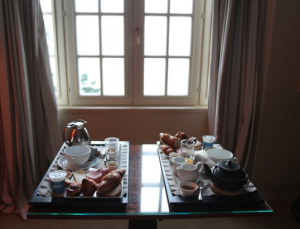 Breakfasts were spectacular, whether served in our room with country ham and local cheese, or enjoyed after a run in the town square at the Grain de Vanille, Les Maisons de Bricourt’s salon de thé. Our taste buds were dancing with new discoveries; from the first bite of the morning’s pommé pastry to the bulgar powder we added to our yogurts.

On Saturday night we had reservations at LMdB’s Michelin starred restaurant, Le Coquillage, set in a 1930’s Chateau Richeux, several kilometers from the Cottage. We were familiar with the chef thanks to his spice shop in St Malo, which we had discovered on our last visit to the region. Being a spice loving, chili pepper-heat deprived Californian, I was an Olivier Roellinger fan before we took the five steps up to the front door. 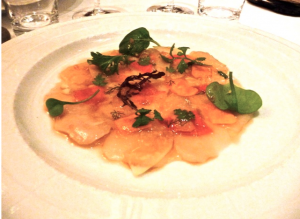 A basket of fresh autumn squashes greeted us, with an invitation from the kitchen’s gardener to help ourselves. If I’d dared, they’d have been the perfect decoration for this week’s Thanksgiving dinner, but they were somewhat larger than my elegant little clutch, and I’m ultimately a fashion first kind of gal.

The place was literally jumping with staff and diners. Everyone happy and relaxed, fashion ranging from jeans and boyfriends sweaters to Chanel suits. The food phenomenal. We both chose the a St Jacques (sea scallop) tartare for our entrées and I’m still getting a thrill from the hit of crunch and flavour I’d get as bits of citrus exploded between my teeth. Mr French’s plat was abalone, fished from the bay by a certain Phillipe, while I spoiled myself with lobster grilled in the chateau’s fireplace.

There was an entire cart of mini pastries to choose from, most of them featuring excitingly fresh flavours and spices, with a few traditional rich offerings thrown in for good measure. 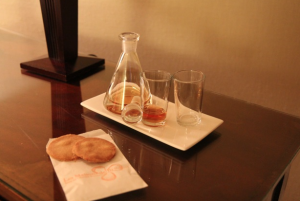 eal we curled up in leather club chairs, sipping herbal teas and digestifs, by a fireplace in the salon before being escorted “home” by our driver. Yes, we had a driver. The Chateau Richeux has 13 rooms and suites just above the dining rooms, but for guests staying further afield at LMdB’s cottage, they offer a free driving service for dinner, keeping the roads safe for everyone. Not a bad idea after an apéro, a bottle of wine and the digestifs!

We ended the night lulled to sleep by the melody of the sea. Sweet dreams afloat.

3 thoughts on “Cancale can cook”