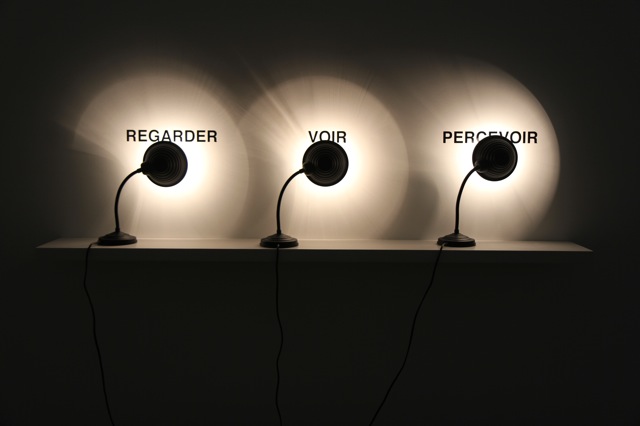 Yesterday I left you just before describing the powerful work of the Catalan born, NYC based, multi-media artist Muntadas.

Muntadas started his career as a painter and discovered multi-media in the 1970‘s.  Unlike many photographers, he is not just recording the “decisive moment”, he is creating the moment. 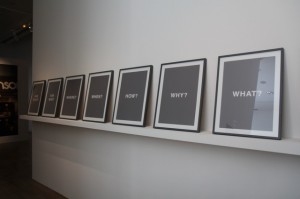 This artist has something to say. So much to say that he often uses the images of words that come across his path, or adds the words himself, to create potent messages.

Like the words “Power Symbol” in the windows of a limousine, with the Brooklyn Bridge looming over the background, or the brightly quilted banners that read, “difference between dying and living” with black and white footage rolling nearby. Or the three words, “look”, “see”, and “perceive” highlighted under office lights. 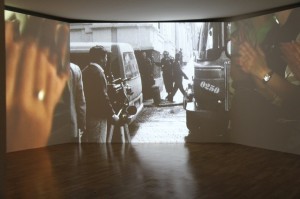 I was particularly moved by a series of three films projected in a bare, white room. The wall to the left and the wall to the right show hands clapping loudly while the images on the central screen pass from an applauding crowd to scenes of war and nuclear reactors and back to the crowd then on to some more news footage. I stood there transfixed. Its a dark world we discover through Muntadas’ lens, but there is a sense of hope and the possibility of redemption that is often absent in art today.

And because my day had not been fantastic enough, just as I was ready to drag myself away, one of the PR gals pulled me to the side to say Muntadas was in the café giving a talk. I took a seat, front row center and sat there listening to his point of view on the art market and the creative process. At some point there was a lull and he asked what we had thought of his work, but this is Paris and the journalists were French, so no one dared offer their point of view. Not wanting to make a stir, I waited until after the talk to go up and share how powerful I’d found his work. 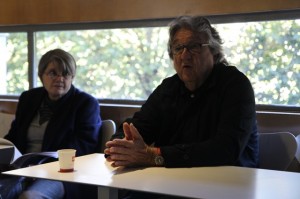 He was impressed, incredibly impressed. Not with my insightful revelations about his art, but with my accent. My accent!!!

“I am very interested in accents lately.” he shared with me, which seems a natural subject for a man who speaks no less than 5 languages fluently, comes from a region with two official languages and lives in a city where you can hear every accent on planet earth, with perhaps even an ET accent or two.

As we spoke, and I revealed that I was from San Francisco, he paused. “I think its time I did a piece on accents; Yes, I am definitely going to start an accent project.” I was thrilled to have brought a-muse-ment to the moment.