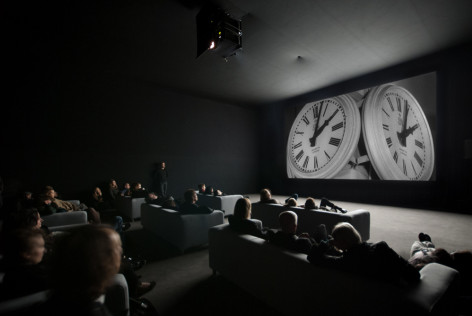 Last week was La Nuit Blanche, when the entire city is encouraged to pull an all-nighter and stroll from art gallery to installation, appreciating the City of Light at night. I love this event and look forward to it every year, but this year I was particularly excited because I’d read in The New Yorker that Christian Marclay’s film The Clock would be playing at the Palais de Chaillot for the night.

When I tell friends that The Clock is a film in which the artist has taken scenes from other movies that show the exact minute on clocks or watches and he has patched them all together to make a 24 hour long film, we’ll they’re not exactly begging to be my date. 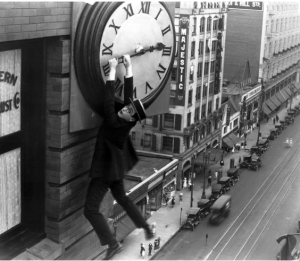 I was still sick. Mr French was sick and it was pouring rain. I insisted we go anyway. There was a 40 minute line outside of the Cité de l’Architecture, which is in the same building as the Théatre Chaillot. We felt like we’d won the lottery as we walked up to the front door.

“Ah, non madame, the entrance is around the corner, through the tourist hoards and down the stairs.” Fantastique.

Downstairs, of course, there was a line. A very long line. Turns out there are a LOT of The Clock groupees in Paris. We got into line and after 40 minutes in the now cold rain, Mr French looked into my eyes lovingly, “This movie had better be good, chérie.”

“I don’t know about the film, but I sure know you love me after this wait.” 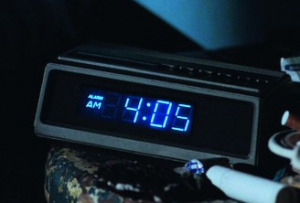 5 minutes later we were in a large tent with dozens of IKEA sofas. We settled in and we were swept away, watching time fly without seeing the time pass. I know that the concept sounds dry and boring, but there are scenes that tell a story in each one of those minutes that Marclay captures on celluloid and he takes those scenes and weaves them together, creating a tapestry of new stories and captivating interactions.

You’re in a 1950’s newsroom when an injured, bleeding man falls forward, surprising you and terrifying the woman from the next scene, in her 1940’s farmhouse. It is also fun to identify the movies and the actors from American, but also French, Italian, Japanese and other international films. Tati Danielle drops her dentures into a jar next to the clock on the bedside table while Indiana Jones stews for five minutes in a casbah.

As midnight approaches you start seeing more and more clocks and watches, creating tension as the celebrations begin, then quickly turn into gruesome deaths, all in a span of sixty seconds. We staid for 2 hours and 40 minutes, and even then I had to peel Mr French off of the sofa and into La Nuit Blanche.

NOTE / The Clock travels the world so be sure to make time to see it when the film visits your town.