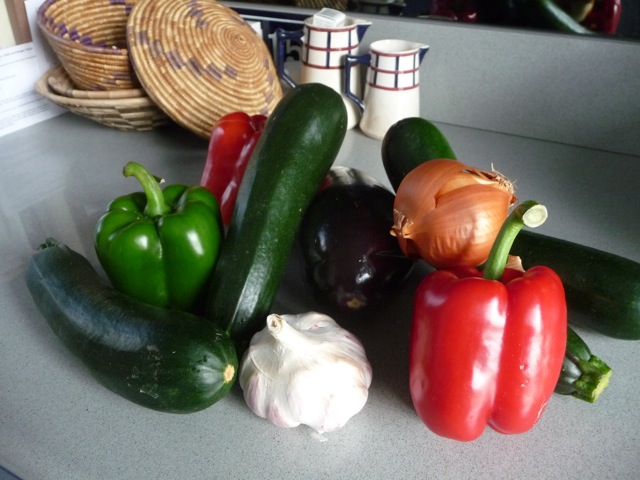 Always on the look out for new food to prepare, I jumped at the opportunity to learn a new recipe when the Chief Parisienne suggested we prepare dinner together. Her family has a home in the South of France, so I was not surprised when she declared that we’d be making ratatouille, although I was surprised that she makes it without tomatoes.

At the market we purchased

We already had Herbes de provence and garlic at home. 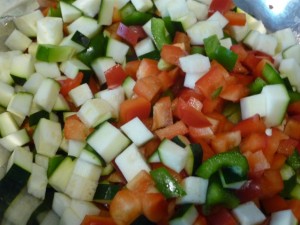 In the kitchen we opened a bottle of Sancerre and drank to our health. Then we minced about 1/3 of the head of garlic and diced all of the veggies into small cubes. The pieces were about the size of a fingertip and she kept reminding me to make them smaller, but be safe with that knife and don’t add the fingertips themselves!

In a spaghetti pot (Parisiennes have tiny kitchens and make do with whatever pot is on hand, at home I use a large frying pan), the CP sautéed the onion and garlic over med-high heat, adding a pinch of salt. When the alliums were soft and transparent she added the eggplant. About 5 minutes later the rest went in, including a pinch of herbs with a few turns of the pepper mill. In another 5 minutes we turned the flame down to low and headed into the living room for a second glass of wine. 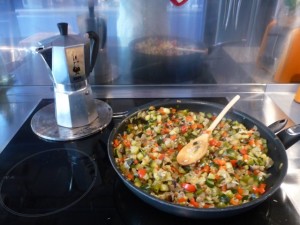 Every now and again, the CP would return to the kitchen and stir things up. At some point, without telling me, she added a cube of sugar.

I took my hot veggies home in a tupperware, grilled a few lamb chops and got to bask in the title Kitchen Goddess for the rest of the week. The following week they were all clamouring for more. I set to work, but no matter how hard I tried, I couldn’t get the right taste, which is when I remembered that the CP had disappeared into the kitchen on more than one occasion. So I made a brief phone call, and sure enough, we’d forgotten to mention the sugar. One cube later, and it was perfect! 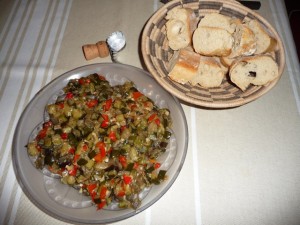 This dish takes longer to prepare than most meals I make, but even the gourmet pre-made versions are about 50% fat. Double batches are easy to cook and it freezes well, so it is worth the effort.

VARIATION: Heat the ratatouille up in a large skillet. Crack two eggs over the simmering vegetables and let them cook through. YUM!