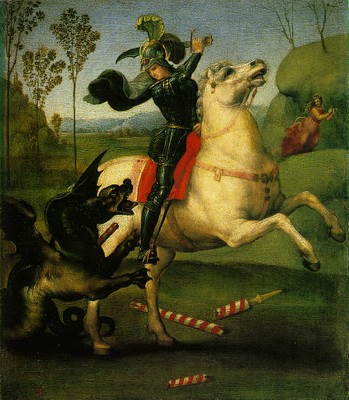 Paris Fashion Week is over and I am officially on the mend, so its back to work and real life. Sometimes real life for me includes being Mr French’s date at corporate events. In my past life these were dull, boring affairs, so torturous it could make a girl want to rip her hair out. But in Paris, they often turn out to be fantastic soirées that I am thrilled to attend, even if I’ll be surrounded by lawyers of chicken farmers. Case in point, last week’s sneak preview of the Raphaël exhibit at the Louvre.

Mr French joined me under the pyramid, directly from the office, rain drops dashing off his raincoat. A quick bise and he asked if I knew who Raphaël was. Insulted, I started rattling off the (very) little that I did know.

“Yes, but did you know he was also one of the Ninja turtles. They were Michelangelo, Leonardo, Raphaello and… zut, I’ve forgotten the last one.” I was ready for the champagne that just happened to be coming our way on a silver platter.

As much as I love art and can go into near ecstasies talking about a 24 hour long film that watches time go by, I am not a major fan of religious art. A bit too much gore and angst for my personal taste, and they all end up dead in the most gruesome ways. Makes me worry about the human condition and why we are so obsessed with a violent end.

Most art of this genre was commissioned work, so there is rarely any personal statement attached and not a lot of emotion going on. Which makes sense, because the emotion should be coming from the viewers’ religious faith, but it doesn’t do a lot for me, faith-less soul that I am.

I do love color and light, and Raphaël was a master at both. His paintings are pretty and there is often a random servant girl or disgruntled princess in the background, adding a dash of whimsy.

One more flûte and I was ready to enter the exhibit. There were docents to greet us and educate us in every gallery. Our first docent talked about Raphaël’s background and I was absolutely floored when she informed us that he had been greatly influenced by the other Ninja’s; Leo and Mic. She pointed out how he copied da Vinci’s triangle layout and the way Michelangelo interpreted movement. “Yes, but who was the 4th turtle?” Mr French hissed in my ear.

look at those toes

I’m not sure I was supposed to be fixating on this, but either 16th century Italian women had fingers on their feet, or Raphaël wasn’t so great at depicting the human form. From the classical oil paintings, we moved on to a room with some truly fantastic sketches and then another room with extraordinary tapestries. I really loved the tapestries, even if they were only based on sketches by the artist, and not actually created by the artist. Actually, Raphaël was a busy guy, with several ateliers and lots of students, doing everything from religious art to architectural drawings for buildings, so a lot of the work in this exhibition is not by Raphaël. I can only imagine his production had email existed.

There was one painting of Saint John the Bapstist that I really flipped for, but it was by Michelangelo and it was in the show to demonstrate how much Raphaël was inspired by the other masters of his time. You see a lot of it throughout the collection.

The final gallery focused on portraits. At last, great art with intriguing stories of arranged marriages and brothers that pulled the strings. The room was so inspirational that it inspired Mr French to lean over and whisper in my ear, “Donatello”. It was time to leave and get some more champagne.

3 thoughts on “Raphaël at the Louvre”