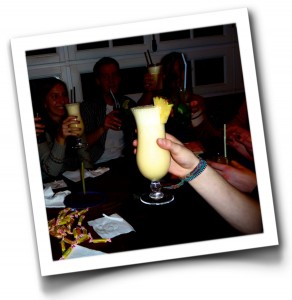 This week, my darling daughter turned 18. Being the incredibly organized, absolutely perfect fairy-tale Mom that I am, everything was set and ready to go by last Monday. Or not.

Some time Sunday night, it occurred to me that 18 must be a really big deal for a French kid. Not only does she get to vote this year (twice, thanks to her double nationality) but she can now legally order her own drinks. Wahoo! It was time to throw a party. I SMSed the bff and she started SMSing the clan. Curious messages inquiring “where?” started pouring in. Hmmm… hadn’t really thought of that.

Where do you throw a last minute party on a tight budget for a dozen 18 year olds in Paris? And since they’re just kids I didn’t want to be getting them silly drunk, so there had to be food. My other dear daughter informed me that Parisiennes don’t eat at parties when there were boys present, because it simply isn’t elegant. Pizza, she told me, was out.

Last minute cocktails for 14; Candelaria was my first thought. I’m addicted to their Green Hornet cocktail, the bar is cool and the food fun, yet affordable. They wanted to help me, but there are only 11 seats in the entire restaurant, no food in the bar.

I started scouring 52 Martinis and decided that the Prescription Cocktail Club was my next best shot. Last time I’d been there we’d enjoyed some mini-burgers and other finger foods while sipping some excellent cocktails in a chicer-than-I’ll-ever-be decor. I decided to talk about it with them in person. The bartender loved the idea, he was thrilled to have us, but no food, “Sorry. Our chef left us last night.”

It was now 4 pm, Monday night, with no other easy options, I headed over to one of my personal favorites. With beach shack architecture, La Rhumerie juts out on the boul St Germain, but is generally over-looked by tourists who either want something “French”, or who assume it is a tacky tourist joint because, well, it looks like a tacky tourist join. The drinks are good and I have a soft spot for kitsch, so it works for me. They don’t take reservations, but the waiter assured me that 8pm on a Tuesday night would not be a problem.

The waiter lied. The next night was the first day of spring and spring had sprung so the place was full of locals pretending to be on holidays with their frothy rum drinks and spicy caribbean appetizers. The waiter told me that it was going to be a problem. I assured him that there wasn’t going to be a problem and that I had the utmost confidence in his abilities. I sat there, my back rigid, looking like an uptight school marm, anxiously waiting as all around me people were relaxed and having fun. I think I scared him. I was rewarded for my confidence one hour later, exactly 36 seconds before the first guest was set to arrive. I had earned my cocktail.

The rest of the evening went by splendidly. Dear daughter was completely surprised and absolutely thrilled, her friends were duly impressed and I hear that once I’d made my exit, a good time was had by all.