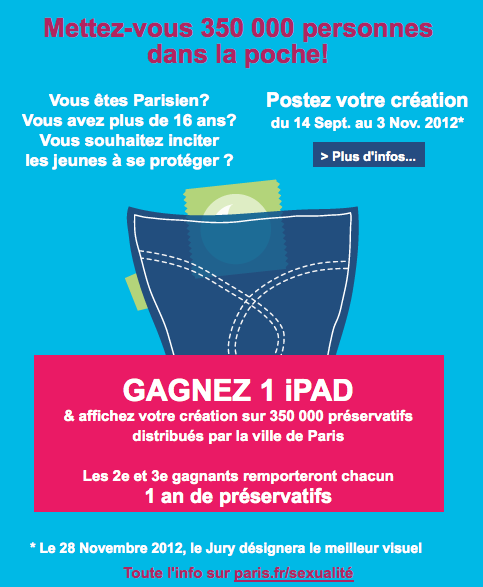 Paris, the City of Love, the City of Lights, the City of Romance, the City of hot, passionate, spontaneous sex. There seems to be a lot of that going on in the city these days, and for the most part, that is a good thing. But with 7 000 new HIV infections in France each year and approximately 40-50,000 infected people who have never been tested, our socialist mayor, Bertrand Delanoë thinks its time to do something to educate all those teens out there putting themselves at risk. Being a smart man, he is not trying to stop kids from having sex. Parisians have no problem with electing a gay mayor, but introducing the uniquely American concept of Promise Rings would signal an end to any Frenchman’s political career. 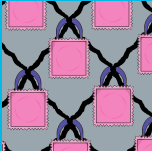 So the City of Paris has decided to protect the sexual active and is holding a condom design contest. At first I got all excited about the project, imagining clever designs that would rise to the occasion, but I got a bit a head of myself and they’re really only talking about the packages. 500,000 packages which will be distributed across the city throughout 2013. To participate, the designer must be a Paris resident and over 16 years old. Design concepts are uploaded on the dedicated Facebook page and the wo/man with the most votes wins the right to have their artwork be there for some very interesting moments (if only the wrapper could rap).

If you’re not an artist, you can still log on and vote for your favorite designs. The city is expecting a plethora of preservatif protected Eiffel Towers, capote coated July columns and poteca swathed obélisks. My personal favorite today is probably the Paris Ponts with an illustration of the love locks by Louise Kinet, but Justine Collette’s J’aime me proteger probably says it best in the heat of the moment.

The winner will receive a free iPad, but depending on the designer and her/his lifestyle second or third place may be more financially rewarding; 1 year’s supply of condoms. I just love sitting back and picturing how you claim that prize. Is it an avg. of the last three years activity? Do you call on demand?