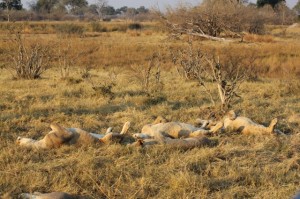 I call it Bush TV: sitting around watching wild life happen. This week I tuned in, completely spellbound by Pata Pata and her pride, first spotted on a tiny peninsula in the Savuti channel, just off the Linyanti river, lying fast asleep with her sisters, children, nieces, nephews and one young cub, Motheleli. 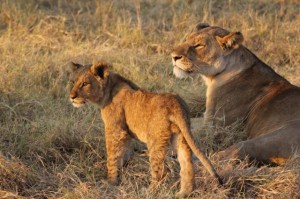 They are grasping whatever warmth is left from the weak winter sun as it sets over the gold tinged veld. 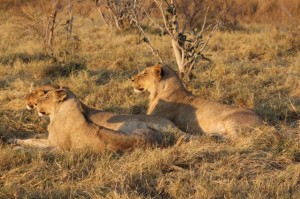 A buffalo herd, several kilometers away, is on the move. They are out of sight but it is clear they are headed towards the pride as Pata Pata and the girls begin stir, noses in the air, sniffing out the arrival of every lions’ favorite treat and greatest enemy. Suddenly, they’re up, stretching and scratching and preparing to hit the road while Motheleli runs playful among the entire group, getting hugs and trying to avoid the swatting paws of annoyed, sleepy aunties. 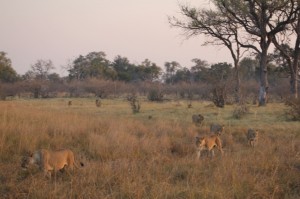 “Ladies, it is time to hunt.” chides Pata Pata in a low growl.

They parade by, single file: all eleven of them, one after the other, eager the hunt. 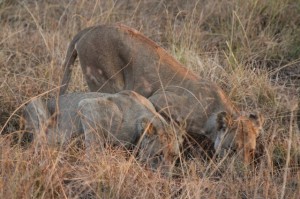 As they pass the water’s edge Pata Pata stops with a sister for a quick drink and is spotted by Ali, an ambitious crocodile hungry for a taste of lioness. 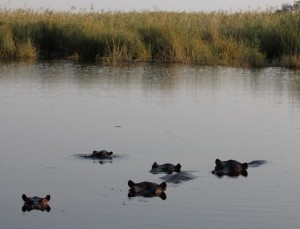 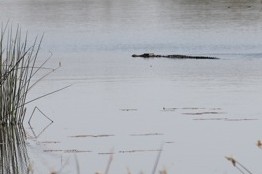 Hippos look on as she slips silently into the water, knowing that Ali would loose the battle on land, but stands a chance if she can lure one of the girls into the slippery depths, if only the felines will stay close enough to the river’s edge the time it takes her to arrive… 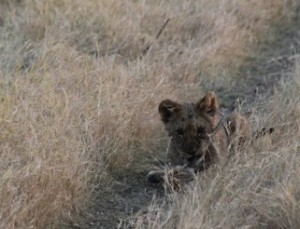 Motheleli tries to keep up with the group, but her attention is drawn by an enticing stick, which she snatches and begins to toss around. Still in that awkward cub stage, she hits Pata Pata in the hind quarters, earning a quick cuff behind the ears, inadvertently saving her Mom’s life and depriving Ali of a feast fit of a king.

After the commercial break the entire pride is found pacing a wooden bridge. 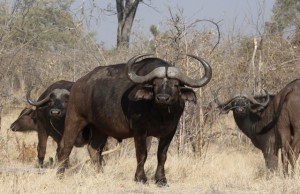 Trapped!!! Buffalo herds stand menacingly at either end, digging in their hooves, hoping to disembowel a lion with their horns before the day is through. They have the time, it is only 6am. A Range Rover packed with popsice-lized tourists in dark green ponchos arrives, their cameras clicking away furiously in sports mode, unwittingly chasing off the herd at one end of the bridge and allowing for a quick leonine escape. Pata Pata & Co are back in the game.

Heading into the bush the hunters regroup and come up with a fresh new strategy.

“Hey, guys,” purrs Pula, “I know… you think teenagers are useless, but, like, I got this one, really. Like, really, I’m going to lead the chase on this one, ok?” 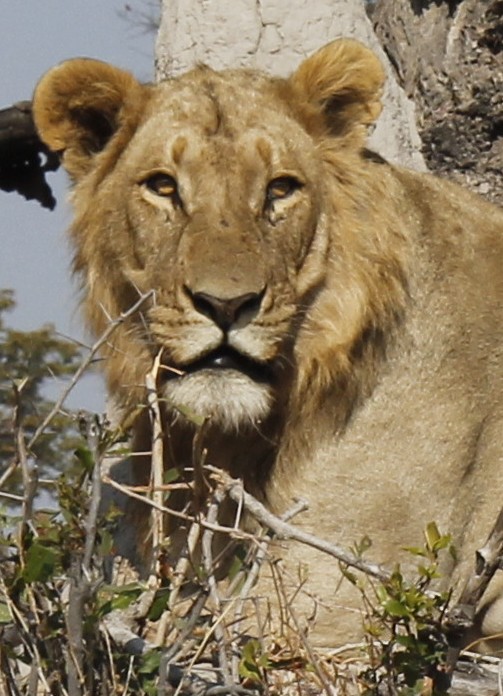 The lionesses agree reluctantly. They are painfully aware that his mane has started to grow in and he shall soon be forced to leave the pride to fend for himself until he is old enough to win a pride of his own.

“Ok, like, here’s the plan, you guys, like, hide in the bushes while I’ll, like, create some kinda really cool distraction, you know, to isolate a weak calf, and then, like, you circle in for the kill. But, ok, remember, me first, you promised!”

They return to the herd, stalking them the entire day, while remaining upwind to mask their carnivorous smell.

Pula waits patiently, carefully choosing his prey. The moment arrives and he is off, tearing through the bush, dust flying in his wake. 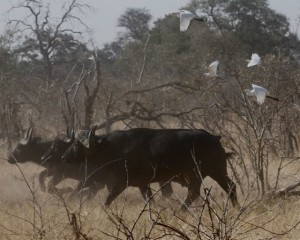 The herd is furious. They are tired of being treated like easy prey. Who does this puny little guy think he is, the King of Beasts? It is time to teach these cats a lesson. They charge back, egrets following in their wake, circling Pula, as Pata Pata and the girls look on helplessly, the stampeding hooves too dangerous to cross. 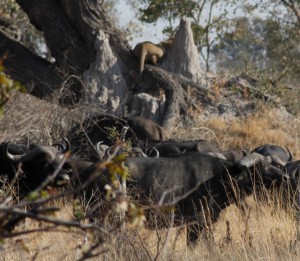 Pula runs for safety, heading up a termite mound that rises two meters above the ground, a solid tree trunk growing from its side. Buffalo can’t climb and their vicious horns can not reach him from this angle. He is safe; for now. 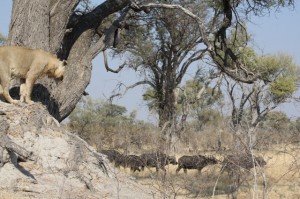 The girls are hungry and frustrated with their foolish brother. It is time to eat. They head off to find themselves an easy snack: impala. At last, some meat.  Satisfied, with bloody faces they return to Pula and tuck in for the night, staying close by their hapless brother as he plans his next move.

Stay tuned for the next episode…

2 thoughts on “Days of Our Lions”