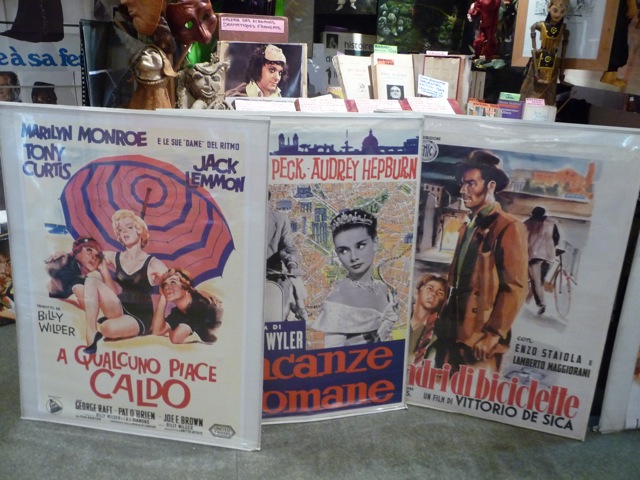 And proud of it. Or at least, I don’t mind. Its not like I exactly had a choice in the matter, and while I wince at the memory of my forest green polyester dress suit, I still wear my purple fleece Norma Kamali winter coat and I am happy to spend hours with E and M, curled up on the sofa, munching away on popcorn as we watch Molly Ringwald’s melted chocolate eyes on the silver screen, seducing us through the expert guidance of John Hughes. 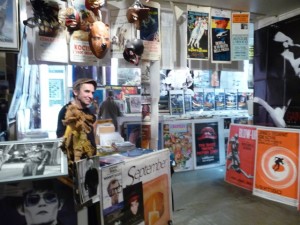 When I met my new BFF, Scaramouche this weekend I naturally had Freddy Mercury bellowing Bohemian Rhapsody in my mind. “Thunderbolt and lightening…”. Curiousity got the better of me and I learned that his namesake is a conceited clown from the commedia dell’arte. Clearly, this was my kind of dude. And what was the 2012 Scaramouche’s particular brand of conceit? Commercial hubris. 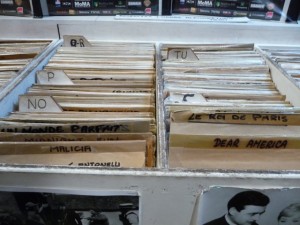 This reformed pharmacist, friend of the graphic novelist Moebius and over all connaisseur rules over his domain like a light-hearted, extremely knowledgable clown, teasing flâneurs who have stopped to rest their weary soles at the terasses of the cafes in the Passage Molière. That is how Mr French and I first discovered his shop, Librairie Scaramouche. We were sitting there, sipping away at our poirés (think cidre, made with pears, delish!) when a door popped open and inside we spied a treasure trove… Ali Baba’s cavern. 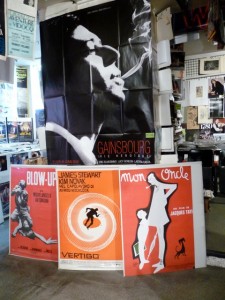 Just beyond the man, we spied posters of the great, classic cinema from every decade. Everything from Mon Oncle to the 2012 Cannes film festival; Audrey in Vacanze Romane to Tim Burton at the Cinemathéque, it was all there. There were cheap reprints, affordable press shots and vintage posters, as well.

We spent hours wotj Scaramouche, admiring his collection while we discussed Moebius and Billal. Most of the work is quite affordable, in the 20€ range. I can’t wait to come back here in November for our Christmas shopping. Hopefully by then he’ll have had time to hunt down a Pretty in Pink poster in French…