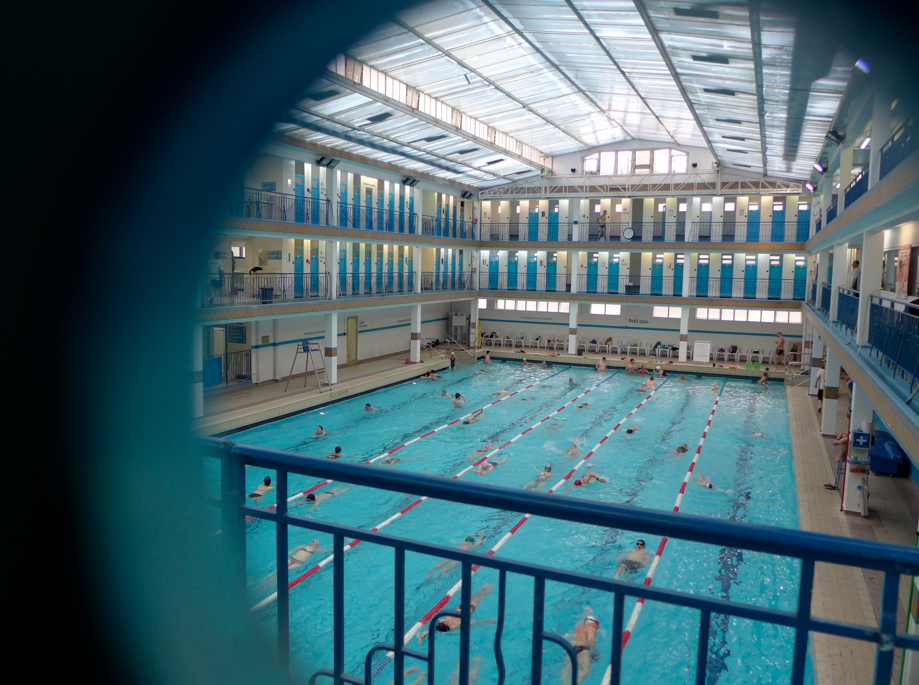 The training schedule for the Semi Marathon de Paris, that I found here; Half Marathon training schedule at Shape.com felt like a needle popping the balloon of my ego when I read that it wasn’t enough to run, I needed to introduce something called cross training into my routine.

Scrambling for a solution and a bit bored with the gym, I decided to check out the 1930’s historical monument, La Piscine Pontoise. Makes sense, no? You need to exercise so you search out a little bit of architect? The Montparnasse pool is just a few blocks away, the Piscine Pontoise involves taking the metro. But I figure if I am going to suffer, I might as well do it in style.

Like a turquoise jewel, adorned with two rows of blue doors and set in an ornate mounting several floors below a precious steel and glass ceiling. It is a beautiful space and for the most part, I love going there. For the most part, because the French are not exactly the best people on planet earth for following the rules and Parisians in particular seem to think they were created to keep everyone else in line so they can have their way with the world.

Managing the anarchy in everyday life requires a very precise choreography that took me several years to master. But I am new to it all at the pool, severely handicapped by my poor vision and pathetic paddling skills. Which means there are incidents. Incidents involving others that happen several times every session and leave me screaming, berating folk and spewing my outrage. Silently, in my head. It is a pretty hysterical place to be as I go back and forth and back and forth, having so much fun with my anger, I forget to count my laps.

Yesterday it started 1/2 way through the first lap. Well, actually, that is not true, it started while waiting line and the woman behind me tried to cut in front. As if getting into the pool area nano second sooner was going to help her win Olympic gold. We were on dry land, so I brushed it off. Handed in my ticket, got a dressing room, made it downstairs; took my shower, got my paddle board and found myself at that 1/2 lap when I found myself blocked by someone trying to run in the water and here is what happened in my head;

“Oh my god, its that guy really trying to run in the water? Doesn’t he know this is a lap lane? Wow, nice back, but still, he needs to get over to the retard lane. Whoah!!! Did you just think that, Sylvia? Retard lane? Seriously? You’ve been in France WAY too long. You can’t say OUCH. Now who just scratched me? What the??? What is that woman wearing on her hands??? Damn, can’t see.

So back to the whole retard thing. You really can’t say that, you’ve got to come up with a better term. Hmmm…. Chicks who chat lane. That’s perfect! Stick with Chicks who Chat lane, gives the perfect image of all those lazy chicks hanging on the side. What are they doing here, anyway? Addicted to the scent of chlorine?

Made it! One lap down, dozens to go. No, no, stop that, no backstroke, remember the last time you attempt the backstroke. You got head butted. Twice. Oh, whoa!!! That woman is wearing huge, black rubber gloves! Looks like she’s trying to wash away evidence after a chainsaw murder… Hey, monsieur! That black lane of the pool bottom is a LANE!!! Stay in your lane!!! Damn it!!! I know we lost Waterloo, but really, we’re not British, in this counrty you drive to the right. Same for the lap pool, folks? Don’t any of you drive? Oh, wait, probably not, what with the metro and all….

And so it goes, on and on for 40 minutes. I’d feel like most of this was my fault for being a slow swimmer and lame navigator, but since I’ve been on a roll, I’ve had lots of Parisiennes come clean and admit they’ve abandoned the pool because the Parisiennes are simply im-poss-ible.

6 thoughts on “In training…”